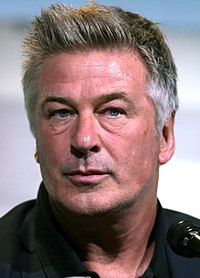 Alec Baldwin has Irish , British and French roots. He was born in 1958 to Alexander Rae Baldwin, Jr. (1927-1983), a teacher and football coach, and Carolyn Newcomb Martineau (* 1929) on Long Island. He comes from a family with six children. His three younger brothers are also famous actors William , Stephen and Daniel Baldwin .

He studied political science at George Washington University . He later switched to acting at New York University and the Lee Strasberg Theater Institute in New York.

Baldwin is a politically active contributor to The Huffington Post since 2005 .

On August 19, 1993, Baldwin married actress Kim Basinger , with whom he stood in front of the camera for the films The Blonde Temptation and Getaway . Their daughter Ireland (* 1995) now works as a model. In 2002 the couple divorced. 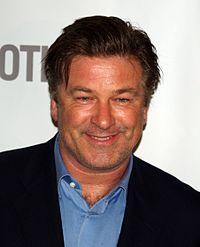 Baldwin first became known in the television series The Doctors . He was also on stage for the play A Midsummer Night's Dream by William Shakespeare . In 1987 he made his screen debut with a supporting role in the film Forever Lulu and two years later he appeared in numerous films. Baldwin made his breakthrough as the lead actor for the role of Jack Ryan in the production Hunt for Red October . However, he turned down the continuation of the role in the film The Hour of the Patriots in order to devote himself to his Broadway career. Harrison Ford took over the part for him .

He was nominated for a Tony Award for his role in the Broadway revival Endstation Sehnsucht .

Between 2006 and 2013 he played one of the lead roles as manager Jack Donaghy on the NBC sitcom 30 Rock opposite Tina Fey . In November 2009, Baldwin announced its intention to exit the film business in 2012. Baldwin reads the poem Tidepool Interlude on Beach Boy Alan Jardine's album A Postcard from California , released on June 28, 2010 . In February 2011 Baldwin was honored with a television star on the Hollywood Walk of Fame .

Baldwin has been dubbed almost exclusively by Klaus-Dieter Klebsch in German-speaking countries since 1996 .

Alec Baldwin has been successfully parodying Donald Trump on Saturday Night Live since 2016 . In February 2017, the Dominican newspaper El Nacional included a photo of Baldwin in his role as Trump in a serious article about the US President. In the same year, he won the Emmy for Best Supporting Actor in a Comedy Series for his Trump parody .

Baldwin was involved in several incidents, which is why he came to court several times. In 2014 he was arrested for disturbing the public peace. In November 2018, he was arrested again after allegedly slapping a man in the face in an argument over a parking space.

Baldwin is also politically active. He is a Democrat and supported the then presidential candidate Barack Obama in his election campaign.

Baldwin was the victim of a stalker for a long time who claimed to have had a relationship with him. In 2013 Baldwin successfully defended itself against this in court.

As a voice actor