The best of enemies

The Best of Enemies is a historical drama film directed by Robin Bissell and released in the United States by STX Entertainment on April 5, 2019. The biography is based on the book The Best of Enemies: Race and Redemption in the New South by Osha Gray Davidson and shows civil rights activist Ann Atwater, who tried to change the school system during the racist summer of 1971 in Durham. Klux Klan member Claiborne Paul Ellis has to work together. The book and the film are based on a true story.

In 1971, after an electric fire caused a fire at Durham Elementary School, North Carolina, which is attended by African American students, black civil rights activist Ann Atwater has to team up with Ku Klux Klan member CP Ellis to promote the integration of the Advancing students.

The film is based on the 1996 book The Best of Enemies: Race and Redemption in the New South by Osha Gray Davidson . Atwater and Paul Ellis, whose work is documented, were key figures in the development of their city of Durham in the 1970s . Although it had been nearly 20 years since the Supreme Court ruled segregation in schools unconstitutional, resulting in the 1964 Civil Rights Act , which previously held " Separate but equal, " Durham African Americans were required to comply of the passed federal law fight. In 1971, Atwater was hired by black councilor Bill Riddick to jointly lead a series of community meetings. While Ellis still had a machine gun in his trunk when he first met Atwater because he was afraid of assault, their relationship and ultimately friendship led Ellis to leave the Ku Klux Klan and organize the black and white - Support unions, said Melissa Block of National Public Radio . Ellis died in 2005, Atwater died in 2016. 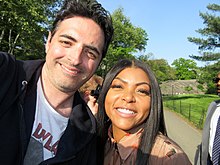 The Bartow County Courthouse in Cartersville, Georgia served as the backdrop for Durham Elementary School

The film music was composed by Marcelo Zarvos .

Filming began in Georgia on May 22, 2017. The Bartow County Courthouse in Cartersville, Georgia served as the backdrop for Durham Elementary School . A restaurant scene was filmed at Ross's Diner in Cartersville, some bar scenes in an American Legion, a building belonging to the state veterans' organization, in Tucker. A fire broke out there in March 2019. David Lanzenberg is the cameraman .

On March 19, 2019, there was a special screening at the Carolina Theater in Durham . This took place as part of the celebration of the 150th anniversary of Durham's town charter. Also in attendance were Ann Atwater's granddaughter and long-time friend Mary Waters. The film was released in the United States on April 5, 2019 by STX Entertainment.