Natalie Portman (born June 9, 1981 in Jerusalem ; Hebrew נטלי פורטמן, actually Neta-Lee Hershlag , Hebrew נטלי הרשלג) is an Israeli - American actress , director and film producer . The then 13-year-old became known through the film Léon - The Professional . Films like Heat , Star Wars and V for Vendetta followed . In 2011 she was awarded for her starring role in Black Swan the Oscar and the Golden Globe Award .

Portman is the only child of her Israeli father, doctor Avner Hershlag, and her Jewish-American mother, nee Shelley Stevens, who became her agent. Her Jewish grandparents emigrated from Europe to Palestine in the 1930s . Her great-grandparents were deported to Auschwitz concentration camp . Her maternal grandparents, Bernice (nee Hurwitz; 1925-2014) and Arthur Stevens, whose real family name was Edelstein, originally came from Russia and Austria and emigrated to America in the 1930s. Natalie's paternal grandparents, Mania (nee Portman) and Zvi Yehuda Hershlag, were Jewish immigrants from Israel. Zvi was born in Poland in 1914 and emigrated to Palestine in 1938, where he became an economics professor. His parents were killed in Auschwitz. One of Natalie's paternal great-grandmothers was born in Romania and worked as a spy for the British during World War II. After her father found a job in the United States, the parents moved to Maryland with their three-year-old daughter . In the following years, due to the father's job, the family moved several times, including in Washington, DC , New Haven and New York , where Portman has an apartment in the SoHo district of Manhattan .

While Portman lived in Washington, DC, she attended Charles E. Smith Jewish Day School in Rockville , Maryland, after moving to Long Island to Solomon Schlechter Day School in Jericho, New York . She graduated from Syosset High School , Syosset, Long Island in 1999. As a high school student, Portman made the semifinals of the Intel International Science and Engineering Fair and published her work in the Journal of Chemical Education .

Portman studied psychology at Harvard University , graduating in 2003 with a bachelor's degree . She also contributed to a cognitive psychological publication on cognitive processes of the frontal lobe of infants. While attending Harvard University, Portman became Alan M. Dershowitz's assistant and made a significant contribution to his book The Case for Israel . During her studies, she lived in the University's Lowell House.

In 2004 Portman returned to Israel , where he took various courses at the Hebrew University of Jerusalem . 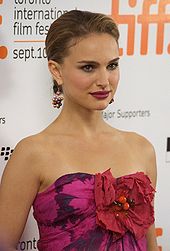 2009 at the Toronto International Film Festival

At the age of eleven, Portman was discovered in a pizzeria . Among other things, she was offered a model job for Revlon , which she turned down with a view to an acting career. She took her grandmother's maiden name as her stage name. For the role of Mathilda in the 1994 film Léon - The Professional , she prevailed among 2000 applicants. With this leading role she achieved her breakthrough. As a successful young actress, she then played in Tim Burton's Mars Attacks in 1996 ! and Woody Allen's musical film Everyone says: I love you with. For the latter, she was nominated for a YoungStar Award .

To take part in the theater play The Diary of Anne Frank on Broadway in 1997 , she withdrew briefly from film, but gave up the role again in May 1998. This was followed by the film drama Everywhere, Just Not Here , directed by Wayne Wang , in which she starred alongside Susan Sarandon . For the role she was nominated for the Golden Globe Award for Best Supporting Actress and for the Young Artist Award in 2000.

From June to August 2001 Portman could be seen again at the theater. The production Die Möwe, based on a play by Anton Chekhov , in which Meryl Streep and Kevin Kline also played, was a hit with audiences at the Delacorte Theater in New York's Central Park .

In 2004 Mike Nichols ' film Hautnah was released , in which she plays alongside Julia Roberts , Jude Law and Clive Owen a young woman who is looking for her place in life. For this film, she won the Golden Globe Award and was at the Oscar ceremony in 2005 as Best Supporting Actress nomination. Also in 2004 she impersonated the cranky and messy Sam in the independent production Garden State and in 2005 played the lead role in the comic film V for Vendetta , for which she had her head shaved. In 2008 she visited the Berlinale to present her film The Queen's Sister .

In 2008 Portman was named to the competition jury of the 61st Cannes Film Festival .

In 2010 filming began on Darren Aronofsky's Black Swan (2010). In the psychological thriller Portman was seen in the title role of an ambitious ballet dancer, which brought her numerous film awards as well as her second Golden Globe Award and her first Oscar . In 2015, her adaptation of the autobiographical novel A Tale of Love and Darkness by Amos Oz was shown for the first time at the Cannes International Film Festival . In 2016, she took on the role of first lady Jacqueline Kennedy in Pablo Larraín's feature film Jackie: The First Lady , which earned Portman a third Oscar nomination.

In the German version of her films, Portman has been largely dubbed by Manja Doering since 1996 . Exceptions are, for example, the films Hautnah (2004) and My Blueberry Nights (2007), in which Marie Bierstedt dubbed her.

In March 2006, Portman was a guest speaker at Columbia University on Terror , where she also spoke about her film V for Vendetta .

On January 21, 2017, Portman gave a speech at the Women's March in Los Angeles; other speakers were Scarlett Johansson , Eva Longoria , Viola Davis and Whoopi Goldberg .

Natalie Portman is also committed to animal rights and veganism. For example, in 2018 she produced a documentary version of Eating Animals , based on the book of the same name by Jonathan Safran Foer , and recorded the documentation herself. It was shown for the first time at the Telluride Film Festival .

At the end of June 2018, Portman was due to receive the Genesis Prize for 2018 in Jerusalem , where she wanted to donate the prize money (1 million US dollars) to women's projects.

In April 2018, Portman explicitly canceled her participation in the planned gala “for political reasons”. "She has found the recent events in Israel extremely regrettable and she is not comfortable attending a public event in Israel," wrote her management. Portman herself said that she wanted to avoid the impression that she supported Prime Minister Benjamin Netanyahu, who was invited to speak . In their communication it goes on to say: "Like many Israelis and Jews around the world, I can be critical of the leadership of Israel without wanting to boycott the entire nation."

From 2003 to 2004 Portman was in a relationship with the Mexican actor Gael García Bernal . Since August 4, 2012, she has been married to the ballet dancer Benjamin Millepied , whom she met while filming Black Swan . The couple have one son who was born on June 14, 2011. The family lived in Paris from October 2014 to August 2016 . Their daughter Amalia was born in February 2017.

2009 Portman announced that the book Eating Animals (Eating Animals) by Jonathan Safran Foer they have made to the vegetarianism - for - they clung to since the age of eight veganism to change and from now on animal in any kind of products to dispense. At their wedding there was only vegan catering. During her pregnancy, she was a vegetarian.

Due to her bilingual upbringing, she is fluent in English and New Hebrew , as well as French .

Unused footage from Thor - The Dark Kingdom was used for Avengers: Endgame . Portman himself spoke in new lines of dialogue for the film, which were adapted to the material. 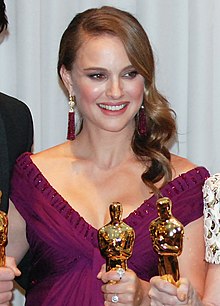 Natalie Portman at the 2011 Academy Awards

Natalie Portman has received various nominations and awards from various award ceremonies for her acting achievements. The following list shows the most popular prices.