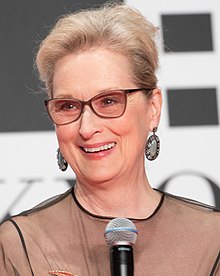 Mary Louise "Meryl" Streep (born June 22, 1949 in Summit , New Jersey ) is an American actress . After her first theater work, she celebrated her international breakthrough in the late 1970s with the multi-part TV series Holocaust and the cinema productions Manhattan , Those Going Through Hell and Kramer versus Kramer . Since then, the three-time Oscar winner (with a total of unsurpassed 21 nominations) has been one of the most sought-after and artistically successful film actresses in the world. Her greatest commercial successes include Sophie's Decision (1982), Out of Africa (1985), Death Suits Her (1992), The Bridges on the River (1995), Lemony Snicket - Mysterious Events (2004), The Devil Bears Prada (2006), Mamma Mia! (2008), Julie & Julia (2009), If Love Was That Easy (2009), The Iron Lady (2011) and Into the Woods (2014).

Mary Louise Streep's mother, Mary Wolf Wilkinson, was a graphic artist. Her father, Harry William Streep, Jr., was an executive in a pharmaceutical company. Her German great-great-grandparents, Gottfried Streeb and Christiana Rosina geb. Zeltmann, came from Loffenau, then Württemberg . One of her paternal great-grandfathers, Balthasar Wilhelm Huber, came from Kerns in Switzerland. She has two younger brothers, Harry William III and Dana David Streep. Her maternal roots are in Pennsylvania and Rhode Island , where eight generations ago one of her ancestors, the Briton Lawrence Wilkinson, was one of the first Europeans to settle.

Meryl Streep grew up near Bernardsville, New Jersey. She later studied drama at Vassar College in New York. She graduated with a Masters of Fine Arts from the School of Drama at Yale University . 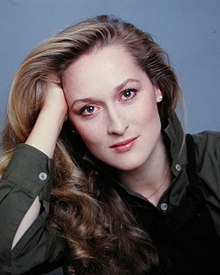 From 1976 onwards, Streep was in a relationship with fellow actor John Cazale . He died of lung cancer in March 1978. Meryl Streep nursed him until his death.

In June 2009, Princeton University awarded her an honorary doctor of fine arts.

In 1977 she began her film career with a role in Julia , followed by the TV mini-series Holocaust - The Story of the Weiss Family , for which Streep won an Emmy for best actress. In 1978 she starred in the anti-war film Those Going Through Hell and was awarded an Oscar nomination for Best Supporting Actress for her performance . Woody Allen cast her in his 1979 film Manhattan , in the same year she played a supporting supporting role alongside Dustin Hoffman in the divorce drama Kramer vs. Kramer , for which she received her first Oscar.

Meryl Streep continued her career very successfully in the 1980s, including roles in The French Lieutenant's Beloved , the drama Silkwood , Out of Africa , Spurge and Greetings from Hollywood . In 1983 she was awarded the Oscar for the second time for the role of Polish immigrant and former concentration camp inmate Sophie in Sophie's decision .

Meryl Streep's most successful film characters are emotionally mature women who are forced by external causes to rethink their concept of life, which they themselves believed to be unshakable. In the early 1990s, despite unanimous recognition of her craftsmanship, she was accused by some critics of being committed to portraying "cool" characters whose humanity was not immediately revealed to the audience. Perhaps this was the reason that her roles had a wider range in the following years, for example in the farce Death suits her well with Goldie Hawn , in the film adaptation of Isabel Allende's The Haunted House , 1995 in The Bridges am Fluss (often regarded as her big comeback), Am wilden Fluss - her first and so far only action film - or in the comedy Die Teufelin . However, this does not mean that she no longer does justice to her importance as one of the greats in the industry, which she impressively underlined with her portrayals in Marvin's Daughters or in Music of the Heart - she even learned to play the violin for the latter film . In 1997 she starred in the TV movie While There Is Still Hope, alongside Fred Ward , with whom she had worked in 1983 in Silkwood . This was the first "serious" film by comedy director Jim Abrahams .

Recently, Meryl Streep has spoken in the original English versions of various cartoons, for example in some episodes of The Simpsons or King of the Hill, and gave her voice to the Blue Fairy in AI - Artificial Intelligence by Steven Spielberg . She also played on the side of Nicolas Cage in adaptation. and four roles in the HBO TV version of Tony Kushner's six-hour play Angel in America . She starred in The Hours with Oscar winners Nicole Kidman and Julianne Moore . Also in 2004, she starred as Angela Lansbury in the remake of The Manchurian Candidate and with Jim Carrey , Emily Browning and Jude Law in Lemony Snicket's A Mystery . That same year, Manhattan borough president C. Virginia Fields proclaimed May 27th as "Meryl Streep Day."

In August 2001, Meryl Streep returned to the stage after almost twenty years of abstinence , where she played the role of Arkadina in Anton Chekhov's Die Möwe as part of the “Public Theater Revival” . The same performance also starred Kevin Kline , Natalie Portman , Philip Seymour Hoffman , Christopher Walken , Marcia Gay Harden and John Goodman, directed by Mike Nichols . The staging with its all-star ensemble and the free tickets were so attractive that the audience had to queue for 17 hours. In the summer of 2006, Meryl Streep played the title role in Bertolt Brecht's Mother Courage and Her Children at the Delacorte Theater in Central Park in a new English translation by Tony Kushner , directed by George C. Wolfe .

In October 2005, the film Couch Whisper - The First Therapeutic Love Comedy with Streep was released in US cinemas. In this film she plays the comic role of a therapist alongside Uma Thurman and Bryan Greenberg . In 2006 the films Last Radio Show and The Devil Wears Prada , a comedy starring Anne Hathaway , came out. For the latter, Streep was again honored with an Oscar nomination. In the film Lucas the Ant Fright , she spoke as the queen ant in the English version. In 2007, the film Traces of a Life was presented in which Streep, an old friend of Vanessa Redgrave, told an Irish family story. In the same year she starred alongside Tom Cruise and Robert Redford (also directed ) in the political thriller Von Löwen und Lammern .

In the musical adaptation Mamma Mia! Meryl Streep appeared in the lead role in the summer of 2008 as Donna, who is confronted with her three potential fathers just before her daughter's wedding. The songs in the filmed play are based on compositions by the pop group ABBA and were sung by Streep and the other actors in the film themselves. In the same year she played the headmistress of a Catholic school on Faith , suspecting a case of child sexual abuse .

Streep is still one of the best-paid actresses in Hollywood, according to Forbes Magazine . Between June 2007 and June 2008, she received fees totaling 16 million US dollars, placing her in eighth place. a. behind Cameron Diaz .

In 2011 she shot the Iron Lady, a biopic about former British Prime Minister Margaret Thatcher , for which she received her third Oscar. She donated her salary of $ 1 million to the America's National Women's History Museum, of which she is a staunch sponsor.

In the summer of 2015, the tragic comedy Ricki - Wie Familie so ist, by director Jonathan Demme with Streep in the leading role, was released in cinemas. In this she embodies the hard rock musician Ricki, who after the climax of her career wants to reconcile with her family, which she neglected during her successful career. At Streep's side, her daughter Mamie Gummer plays , who embodies the protagonist's daughter Julie. In October, the feature film Suffragette was shown on the big screen, in which Streep plays Emmeline Pankhurst , an activist of the women's movement that emerged at the beginning of the 20th century. Streep also starred with Hugh Grant in the film Florence Foster Jenkins , for which she received her 20th Oscar nomination.

In February 2016, Streep was president of the competition jury at the 66th Berlin International Film Festival , which awarded the main prize for the documentary Sea Fire on the refugee crisis on the island of Lampedusa .

In addition to working as an actress, Streep has been politically active in the past, for example for disarmament , aid to AIDS , the peace movement , the environment, the fight against nuclear power and poverty, and for equal rights for women in the film industry. Her politically engaged speech, which she gave at the 2017 Golden Globe Awards and criticized the future US President Donald Trump without mentioning his name , recently received media attention . He then called her "the world's worst actress".

Since Kramer against Kramer , Hallgard Bruckhaus was the regular spokeswoman for Streep. After Bruckhaus withdrew from the dubbing industry in the early 1990s, Dagmar Dempe Streeps has been the German dubbing voice since Die Brücken am Fluß. In an ARD report on the occasion of Streep's 70th birthday, Dempe paid tribute to her with the words: "It's an honor every time."

In the course of her career so far, Meryl Streep has received a total of 21 Oscar nominations, most recently in 2018 for her role as Kay Graham in Die Verlegerin . Of these, 17 were nominated in the “Best Leading Actress” category and four in the “Best Supporting Actress” category . She holds the record as the most nominated actress of all time, ahead of Katharine Hepburn and Jack Nicholson with twelve nominations each. Streep has won the Oscar three times so far: as "best supporting actress" for Kramer versus Kramer (1979) and as "best leading actress" for Sophie's Decision (1983) and Die Eiserne Lady (2012). She also won eight Golden Globe Awards (with over 30 nominations), while the 2017 Hollywood Foreign Press Association also recognized her with the Cecil B. DeMille Lifetime Achievement Award. This makes her the most frequently awarded actress to receive a Golden Globe. In 1999 she was elected to the American Academy of Arts and Sciences . She has been an honorary member of the American Academy of Arts and Letters since 2010 .

Streeps star on the Hollywood Walk of Fame