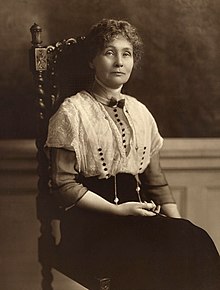 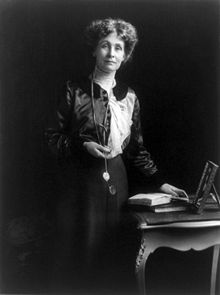 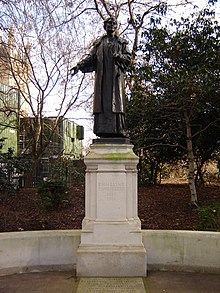 Emmeline Pankhurst, daughter of Robert Goulden and Sophia Crane, grew up in a middle-class family with the radical-democratic attitude of her parents, who campaigned in the Liberal Party against slavery, the grain customs law and for women's suffrage. At the age of 14 she attended her first meeting on women's suffrage. From 1873 to 1879 she attended a girls' school in Paris. On her return to Manchester, she married the lawyer Richard Marsden Pankhurst (1834–1898), 24 years her senior, that same year . She had five children with him: Christabel Harriette (1880–1958), Estelle Sylvia (1882–1960), Frank (1884–1889; died at the age of five of diphtheria ), Adela (1885–1961) and Harry (1889– 1910). After the death of her husband in 1898, she and her children had to keep themselves and their children afloat on the miserable wages of a registrar.

On October 10, 1903, together with her daughter Christabel and four other women in Manchester, she founded the Women's Social and Political Union (WSPU), a radical, bourgeois women's movement .

She developed a theory of nonviolent resistance that was later adopted by the women's movement in the United States . Her daughters Sylvia and Christabel were also active in the women's movement, whose methods became more and more radical and eventually even included arson and bomb attacks, which is why Pankhurst was arrested several times.

After a legislative proposal on women's suffrage had failed in parliament in 1910, the WSPU organized a demonstration. 300 suffragettes marched to Parliament under the leadership of Pankhurst. Due to police violence, the day became known as Black Friday . 115 women and four men were arrested, but the charges were dropped the next day. A subsequent report by the parliamentary Conciliation Committee collected numerous reports of sexualized attacks, especially the twisting and squeezing of the demonstrators' breasts.

Pankhurst's sister, Mary Jane Clarke, was among the protesters. She was arrested at another meeting a few days later and sentenced to one month in prison, her third sentence. Two days after her release, Clarke died on Christmas Day at her and Emmeline's brother Herbert Goulden's home.

Condemnation and imprisonment, radicalization of the women's movement

On April 3, 1913, Pankhurst was sentenced to three years imprisonment in the Old Bailey for masterminding a bomb attack on the country house of the British Chancellor of the Exchequer, David Lloyd George . The verdict sparked a series of street battles between women's rights activists and the police and resulted in attacks on public institutions and prominent people such as Prime Minister Herbert Asquith , who was pelted with pepper and a dead cat by activists. The protests spread across the country in the form of arson attacks and bombings and were soon referred to by the contemporary press as the Reign of Terror .

Due to poor health caused by a hunger strike, Emmeline Pankhurst was released from Holloway Detention Center on April 12, 1913 . The unrest, however, continued to grow. Bombs detonated, acid doused mailboxes, churches set on fire and public transport destroyed. It was characteristic of the actions that no human life should be affected. Sympathizers intoned “God save Emmeline Pankhurst” at Sunday services in St Paul’s and Westminster Abbey , while numerous other churches in the country went up in fire.

The events culminated with the death of the suffragette Emily Davison , who threw herself in front of the king's horse during the race at the summer derby in Epsom on June 4, 1913 and died a little later from her serious injuries. The Pankhursts then stylized Emily as a martyr of the women's movement and depicted her on the cover of their publication The Suffragette as the angel of the racetrack. Pankhurst explained this means of politically motivated suicide: “Human life is sacred to us, so we are determined to do it: if life has to be sacrificed, it is our own. We will not kill ourselves, but we will force our opponents into a position in which they have to decide: finally give us our unrestricted freedom or kill us. " 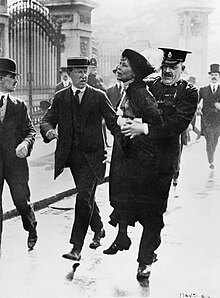 Arrest of Emmeline Pankhurst on May 21, 1914 in front of Buckingham Palace

In the same year, 1913, as hunger strikes among detained suffragettes increased, Parliament passed a law known as the Cat and Mouse Act , which said that prisoners should be released from prison if they became seriously ill from hunger strikes and the associated force-feeding . After recovering, the convicted person should be imprisoned again. Because of this Cat and Mouse Act , Emmeline Pankhurst, who had since recovered, was arrested again in February 1914, whereupon she was again forced on a hunger strike, fell ill and was released.

On May 21, 1914, Pankhurst was arrested again in front of Buckingham Palace and taken away while trying to hand over a petition to King George V. Photographers present held the defending suffragette in the arms of Superintendent Rolfe. During her evacuation she is said to be “Arrested at the gates of the Palace. Tell the King! " exclaimed, as The Suffragette subsequently reported. The photograph, which featured in all London newspapers on the same day, became a significant visual document of the women's movement.

After the outbreak of World War I , Pankhurst turned to promoting the British war effort as the radical women's rights movement ebbed in the face of the war. Emmeline Pankhurst campaigned for soldiers and seafarers to vote during the First World War. For example, she wrote to the then Armaments Minister David Lloyd George that the draft law for the right to vote for soldiers and seafarers should not also include the demand for women to vote so that the former would not fail.

After the outbreak of war, Pankhurst supported the Order of the White Feather like her daughter . The aim of this association was to force men into military service by attaching a white feather to young women when they were not wearing a uniform, thereby making it public that the men were not ready to fight for their country.

Pankhurst spent the following years in Canada and the Bermuda Islands because of her poor health . She did not return to the United Kingdom until 1925 and died in 1928. About three weeks later, on July 2, 1928, universal suffrage for women also came into force in Great Britain .