This article explains the Church in London. For the other cathedrals dedicated to St. Paul, see St. Paul's Cathedral .

The St. Paul's Cathedral (St Paul's Cathedral) is an Episcopal church in London . It is located in the City of London district about 300 meters north of the Thames and is the seat of the Bishop of the Diocese of London of the Church of England . St. Paul's Cathedral is one of the largest in the world . In addition to Westminster Abbey , it is also considered the most famous church in the British capital. The building was erected after 1666 in the classicist Baroque style on the place of the cathedral that was destroyed in the great fire of London .

Previous building with the tower that collapsed in 1561, illustration from the 17th century

The site of today's St. Paul's Cathedral was probably the first dedicated to St. Paulus Church of London, which was built in 604 by Mellitus of wood. It burned down in 675 and was rebuilt in wood just a few years later. After further fire damage, the Normans began in 1087 with a building that was subject to constant changes in the Middle Ages due to fires and renovations. 1300, the cathedral was consecrated , the nave was built yet. After the completion of the nave in 1314, the church was one of the largest and tallest of its time: the building was 181 m long and 149 m high. After the reign of Henry VIII , the church began to decline. The equipment was partially destroyed and in 1561 the tower was struck by lightning . After that, only a new portico was built.

After the great fire, the architect Sir Christopher Wren took over the planning for the reconstruction of the city. In 1666 he planned a large central building for the cathedral on the ground plan of a Greek cross with a dome, which was rejected as too radical and expensive, as did the subsequent revisions of his design, which led to the construction of a large 1:24 model, the so-called "Large model" shown in the cathedral.

Only a draft from Wren from 1675 was accepted. Wren planned a long building with a central crossing over which he provided a high tower. Construction began according to this plan, but due to numerous changes, only the floor plan remained from this original plan. Instead of the crossing tower, Wren was able to enforce his ideas for the dome from the first drafts. The west portico, the main entrance to the cathedral, was not planned until after 1703 and was crowned with two clock towers until the cathedral was completed in 1708.

St Paul's Cathedral is often the site of important state ceremonies and public events: from the 1806 state funeral for Lord Nelson to the celebrations of Queen Elizabeth II's golden jubilee in 2002. In 1981, Lady Diana Spencer and Prince Charles were at the cathedral married. Many famous British people are buried or immortalized in the crypt of the cathedral. It is one of the most visited attractions in London. 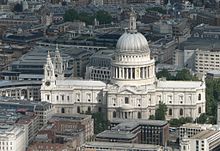 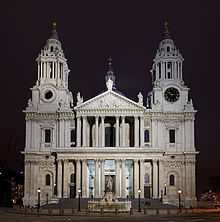 The cathedral is 158 meters long and has a cruciform base that is oriented in an east-west direction. In the middle of this cross is a dome on which there is a 750 t lantern that ends at a height of 111 meters. 111 meters is 365 feet, one foot for every day of the year. To get to the highest vantage point, you have to climb 528 steps.

As is customary in modern multi-shell domed churches, the light shines indirectly into the room through the opaion of the inner dome shell. In order to dissipate the enormous load of the lantern, a conical stone structure is located between the outer and inner dome, which rests on the massive crossing pillars. After all, Wren had the goal of erecting a larger lantern than that of St. Peter's on the cathedral . At the dome base at a height of about 30 m in the church there is a ring-shaped gallery with a diameter of 34 m: the whispering vault , the Whispering Gallery . The sound is reflected here through the curved walls to the opposite side. The wall, which is also curved there, focuses the sound on the inner edge of the gallery. That way, whispered words on the opposite page can be understood.

The carvings of the choir stalls are by Grinling Gibbons , the wrought iron choir screens by Jean Tijou . It was not until 1890 that the glass mosaics on the ceiling above the choir were completed by William Blake Richmond . The high altar , built according to Wren's plans, is the work of Stephen Dykes Bower and Godfrey Allan , who completed it in 1958.

Under the church there is a crypt that extends the entire length of the main nave. In the east the chapel of the Order of the British Empire has been located below the choir since 1960 . The cathedral museum and facilities for visitors to the cathedral are located at the western end of the basement. In between are numerous graves and monuments of important figures in British history, of which the monumental sarcophagi for the Duke of Wellington and Admiral Lord Nelson are particularly noteworthy.

Many important personalities were buried in St. Paul's Cathedral. Among them are:

Winston Churchill and Florence Nightingale have a memorial in the crypt of St. Paul's, but are not buried there.

The first organ was built in 1697 by the organ builder Bernard "Father" Smith, an immigrant from Germany. The prospectus is from Wren, with whom Smith argued for years about the final location and size of the organ. In the end, Wren prevailed, so that the organ was placed across the room on the border between ship and choir, which gave it the function of a rood screen . The cost of the instrument with 27  registers on three manuals was approximately £ 2,000. The organ remained unchanged until 1830; famous composers such as Georg Friedrich Handel and Felix Mendelssohn Bartholdy played on it. In 1859 the organ was moved to the side of the choir room to have a clear view of the choir room.

In 1872 a new instrument was built by the organ builder Henry Willis , about 200 pipes of the Smith organ were reused and are still today. The organ case was divided and supplemented. The new instrument now had four manual works and a pedal ; the actions were pneumatic. In the course of time, the instrument has been expanded and reorganized several times and equipped with electric action.

From 1972 onwards, the organ was extensively revised and expanded by the organ building company Mander Organs (London), in particular with a view to better sounding the entire church space. In this context, among other things, the trumpets in the west work were added, which sound particularly on royal occasions. The work was completed in 1977, on the occasion of the queen's silver jubilee . The organ is divided into three parts: The Chancel Section , the Dome Section and the West Section . All three parts can be controlled from the main console. The Chancel Section , the actual organ, stands to the left and right of the chancel . The Dome Section stands in the dome and, like the West Section, supports the congregation singing in the nave. The West Section also features the famous Royal Trumpets in 16 ', 8' and 4 'positions. The organ has 105 registers.

In the north-west tower of the cathedral there are twelve bells that ring in the traditional ringing. The bells were cast in 1878 and financed by company donations. The smallest bell (the treble ) weighs around 400 kilograms; the largest bell (the tenor ) weighs over three tons.

Next to it is the bell "The Banger" in the tower, which was cast in 1700 by Philip Wightman. It is rung regularly at 8 a.m. before the celebration of the Eucharist . There are other bells in the south-west tower: one is the Great Paul Bell , the largest bell in Great Britain, weighing 16.5 tons. In addition, the clock bells hang there, u. a. the great Great Tom bell from 1706 weighing 5 tons.