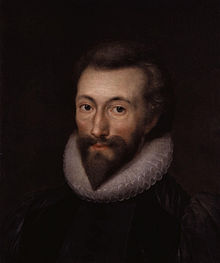 John Donne (born January 22, 1572 in London , † March 31, 1631 ibid) was an English writer and the most important of the metaphysical poets. His work includes sermons , religious poems, translations from Latin, epigrams , elegies , songs and sonnets . 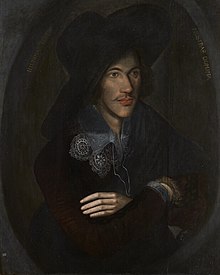 Donne grew up in a Catholic family and studied at both Oxford ( Hertford College ) and Cambridge . From 1591 to 1595 he received legal training at Thavies Inn and Lincoln's Inn . As a young man he traveled to Europe and from 1596 to 1597 accompanied the Count of Essex on his naval expeditions to Cádiz and the Azores . On his return he became secretary to the Lord Keeper of the Great Seal Sir Thomas Egerton (from 1603 Lord Ellesmere, from 1616 Viscount Brackley) and began to make a name for himself as a poet. The works from this period include many of his songs and sonnets, whose realistic and sensual style is remarkable. Donne also wrote many satirical verses showing a cynical worldview.

In 1601 Donne married Anne More, niece of Baron Ellesmere's second wife, in secret; this developed into a public scandal that ruined Donne's reputation; his works took on a more serious tone. Two anniversaries - An Anatomy of the World from 1611 and Of the Progress of the Soul - show how shaken his belief in the order of the Things in pre-revolutionary England was at a time of growing doubt in politics, science and philosophy.

In the work Pseudo-Martyr (published 1610) Donne formulates an extensive legal-historical-state-theoretical analysis of the relationship between secular and spiritual power, as embodied by the English king on the one hand and the pope on the other. King James I had spoken out with his own publications in the debate about the oath of allegiance to the King (Oath of Allegiance), which also had to be taken by Catholics , and was sharply attacked in replies by Cardinal Robert Bellarmin . Support from original minds and brilliant polemics was very welcome. Donne performed it with pseudo-martyrdom. His satire of 1611 Ignatius his Conclave ( The Conclave of Ignatius ), directed against the Jesuits , was probably the first English-language work in which Galileo Galilei was mentioned: Lucifer , the prince of Hell, fears that Ignatius of Loyola might oust him from his throne. That is why he sends him to the moon, which thanks to Galileo's telescope has moved closer to the earth. There the Jesuits are supposed to merge the Lunatic Church (double: moon church or madness church) and the Roman Church and at the same time create a moon hell.

After long financial uncertainty and hardship, during which he was twice a member of Parliament (1601 and 1614), Donne finally followed the wishes of his King James I and was ordained an Anglican priest in 1615. After the death of his wife in 1617 the tone of his poetry was dark, especially in the Holy Sonnets ( Holy Sonnets ).

After his ordination, Donne wrote a number of religious works, such as his Devotions (1624) and various sermons, some of which were published during his lifetime. He was also considered one of the most adroit preachers of his time. In 1621 Donne was appointed Dean of St Paul’s (London) and held that office until his death in 1631.

At the beginning of the 20th century, John Donne was examined in detail in the discussion initiated by TS Eliot . The debate focused on the interpretation of the individual poems and almost completely disregarded the historical and biographical conditions of John Donne. Joseph Brodsky - like TS Eliot winner of the Nobel Prize for Literature - referred to himself as a “student” of Donne and called Donne “one of the greatest figures in world literature”.

Two phrases from Donne's work found their way into popular culture , namely the proverbial “Nobody is an island”, which Thomas Merton and Johannes Mario Simmel chose as the book title, and “ Whom the hour strikes ” as the title of a novel by Ernest Hemingway . Both come from the same paragraph in Meditation XVII :

No man is an island , entire of itself; every man is a piece of the continent, a part of the main. If a clod be washed away by the sea, Europe is the less, as well as if a promontory were, as well as if a manor of thy friend's or of thine own were. Any man's death diminishes me because I am involved in mankind; and therefore never send to know for whom the bell tolls ; it tolls for thee.

“ Nobody is an island , whole in itself; every person is a piece of the continent, a part of the mainland. If a floe washes into the sea, Europe will be less, just as if it were a headland, or your friend's estate or your own. Every human death is my loss because I am part of humanity; and therefore never ask to know for whom the hour is striking ; she hits you. "

The Evangelical Lutheran Church in America and the Anglican Church have designated March 31 as Donne Memorial Day.