David Beatty is a redirect to this article. For the US editor, see David Beatty (film editor) . 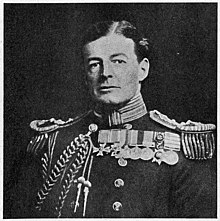 After David Beatty had entered the Royal Navy in 1884, he took part in the reconquest of Sudan from the Mahdists (1896-1899). In the battle of Atbara he commanded a missile division. In 1900 he took part in the suppression of the Boxer Rebellion . Beatty was appointed private secretary to the First Lord of the Admiralty (later Prime Minister Winston Churchill ) in 1911 . Between 1912 and 1916 he commanded the 1st battle cruiser squadron .

During the First World War he took part in combat operations at Heligoland (1914), at Doggerbank (1915) and in Skagerrak (1916). The Skagerrak Battle turned out to be an important event in his career, although the 1st Battlecruiser Squadron suffered heavy losses there. Beatty is said to have remarked to the captain of HMS Lion during the battle : "Something seems to be wrong with our damn ships today". Then he ordered the enemy to attack again.

The Grand Fleet was commanded by Admiral John Jellicoe , the man who could "lose a war in an afternoon" was not a dashing, daring man like Beatty, but was extremely popular with the crews. Jellicoe was later heavily criticized for his cautious approach in the Battle of the Skagerrak and his refusal to introduce convoys . This led to his replacement by Beatty in 1917.

However, he disappointed many of his followers by continuing many of Jellicoe's practices. Unlike Jellicoe, he supported David Lloyd George in introducing convoys in the Atlantic. In 1919 he was appointed Admiral of the Fleet and First Sea Lord until his retirement in 1927. On September 27, 1919 he was given the hereditary title Earl Beatty , along with the subordinate titles Viscount Borodale and Baron Beatty .

David Beatty spent much of his life in Leicestershire and lived at Brooksby Hall (now an agricultural school). During the war, he and his wife performed many public services in Leicestershire. Among other things, they made their house available as a hospital.

Beatty was badly regarded in Germany after he gave the words "Do not forget that the enemy is a despicable beast" to the crews of his warships that received the German deep-sea fleet interned in Scapa Flow , and thus the handover of the fleet prevented her from being perceived by the Germans as a humiliation. That is why Beatty's request was disregarded that at his funeral - as with the Jellicoes - the German fleet should be represented by its commander-in-chief.

After his death he was buried in St Paul's Cathedral in London.