The title of this article is ambiguous. Further meanings are listed under Cheshire (disambiguation) .

Cheshire [ ˈtʃɛʃər or ˈtʃɛʃɪər ], formerly the County of Chester , is a ceremonial and traditional county in north-west England . The capital is Chester . Cheshire borders the counties of Merseyside , Greater Manchester , Derbyshire , Staffordshire and Shropshire and the former Welsh county of Clwyd .

The gardens and parks in the region are part of the European Garden Heritage Network . 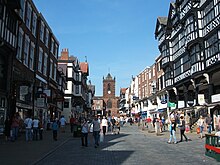 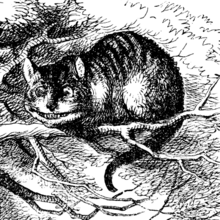 The Cheshire Cat in Carroll's Alice in Wonderland , 1866

In the 11th century Domesday Book , Cheshire is recorded as a much larger county than it is today. Their northern limit was the Ribble River .

In 1182 the land north of the River Mersey became part of the new county of Lancashire . More parts of Cheshire later came to Wales .

The 1974 reform gave some parts of the county bordering Lancashire to the new counties of Greater Manchester and Merseyside , particularly Stockport and the Birkenhead area . At the same time, Cheshire received Warrington and the surrounding district of Lancashire back.

Cheshire in language and literature