This article describes the city in England; for further meanings, see Chester (disambiguation) .

Chester [ ˈtʃɛstə ] ( Welsh Caer ) is a town in north-west England near the border with Wales . The historic capital of the county of Cheshire and the administrative seat of the Unitary Authority Cheshire West and Chester lies north of the River Dee and is one of the best-preserved walled cities in the country. The population is 77,040 (as of 2006).

Chester is around 2000 years old; Parts of the city wall date from this time. It was called Deva or Castra Devana in Roman times . As a fort for the Legio XX Valeria Victrix , Chester was safely located in a loop of the Dee , which was used as a port and defense against the native Celts . At the time, Chester was the most important city in England and an important market and trading point, including for the region's cheese , which is still an important economic factor today. Many relics of the Roman era have been preserved to this day, including the weir that regulates the water level of the river, the "Cross" where four main streets meet and other hints of a strictly systematic layout of the city at that time, remains of hypocausts below many shops and a half amphitheater , the second half of which is covered. After the Roman retreat, the Anglo-Saxons expanded and strengthened the ramparts to protect the city from attacks by the Danes .

Chester is known for its "rows", half-timbered colonnades from the Middle Ages

After the Norman invasion in 1066 , Chester Castle was built as a further defense against the Welsh people . Until the 13th century, the city served repeatedly as a starting point for English campaigns to North Wales. At the same time, the Normans built Chester Cathedral in the center of the city . The cathedral was dedicated to St. Werburgh until King Henry VIII separated the English from the Catholic Church . Chester was the largest inland port in England at the time, and the handling of the port brought the city prosperity. When the Dee silted up, maritime trade preferred the relatively young city of Liverpool . The silted up area is now Chester's Roodee Racecourse , which has a stone cross on it that used to mark the water level.

In the 1640s , as part of the English Civil War, the Battle of Rowton Moor took place in the nearby meadows , in which the forces of Parliament defeated the royalists while King Charles I pursued defeat from the water tower.

In Georgian times, Chester once again became wealthy, this time as a city where the aristocracy who had withdrawn from the country lived. This development continued until the Industrial Revolution , when the city between the industrial cities of Manchester and Liverpool was inhabited by the English upper class. The picturesque character of the city was consciously maintained, the gates Eastgate (1769), Bridgegate (1782), Watergate (1788) and North Gate (1810) were renewed and decorated. For the industry of today to was Shropshire Union Canal belonging Chester channel built as "England's first unsuccessful canal" was called because through it was no heavy industry to Chester. The canal, a so-called narrowboat canal, is now only used for recreational shipping. The railway later reached Chester with initially two main stations, only one of which has remained standing. In the Victorian period, Chester's neo-Gothic town hall was built, which had to be built after the fire of the old Guild Hall and today defines the cityscape together with the cathedral. Part of the town hall is a clock tower with three dials , the side facing Wales remained empty: the architect gave the reason for this, “Chester won't give the Welsh the time of day”.

A significant portion of Chester's land is owned by the Duke of Westminster , who lives nearby in Eccleston . His family name Grosvenor appears frequently in the city, for example at the Grosvenor Hotel and Grosvenor Park . Much of the Victorian architecture in Chester was built in the half-timbered style of the Middle Ages by the architect John Douglas on behalf of the then Dukes. Douglas' hallmarks are the twisted chimneys , which can be seen, for example, on the Grosvenor Hotel and the municipal baths.

In 1938, a new city gate, the Newgate, was built for traffic reasons. Towards the end of World War II , there was a great shortage of affordable housing in Chester. Modern suburbs were therefore built, which almost completely surround the city and the student district belonging to University College Chester . In the 1960s, the slums and a number of concrete and steel structures were replaced by four large residential towers, which are in a certain contradiction to the previously dominant picturesque townscape.

At the moment, the focus is again on maintaining the city's tourist image, and a “renaissance” of Chester is planned.

A pedagogical institute was founded as early as 1839, which from 1921 belonged to the University of Liverpool as the Department of Pedagogy and was made an independent University of Chester in 2005 . The number of students was 15,000 in 2012, and Tim Wheeler is the principal . Chester is also known for the Queen's School , founded in 1878 , which was still called the Chester School for Girls when it opened . As the only school in England, Queen Victoria gave it this name by decree.

Chester's largest employer is the European headquarters of the American bank MBNA (formerly Maryland Bank National Association); there is also a petroleum refinery (ESSAR), chemical industry (ICI) near Ellesmere Port in the north. In the west across the border, near Hawarden, there is an aircraft factory of BAe Systems (formerly British Aerospace ), in which wings for Airbus are manufactured. 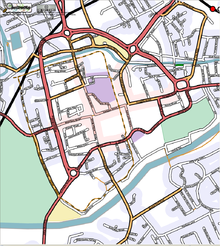 Trains run along the North Wales coast from Chester Central Station in the northeast of the city center, as well as to Liverpool, Crewe , Manchester and Shrewsbury . The station has a facade from 1848. The second station, Northgate Station, was closed and demolished in 1969; in its place is the Northgate Leisure Center.

The traditional soccer club Chester City was dissolved in 2010 due to financial problems. He last played in the fifth division. As the successor club, Chester FC was founded, which began playing in the eighth division in 2010 and has now played in fifth class.

All four cities are also twin cities to one another. Every year numerous meetings and exchanges take place between schools and associations as well as internship exchanges from industry and trade.