This article is about the city of Shrewsbury, England. For other places of the same name, see Shrewsbury (disambiguation) .

Shrewsbury (  [ ˈʃroʊzbri ] or  [ ˈʃruːzbri ] ) is a city in the West Midlands in England , about 60 kilometers west-northwest of Birmingham and 14 kilometers east of the border with Wales . Its medieval core lies in a loop of the River Severn . The town is the historic administrative center of Shropshire and since 2009 the administrative center of the newly formed Shropshire Council . The city has around 71,700 inhabitants (as of 2011).

Today's city is a center for culture and commerce. The retail sector has a large customer base that also includes adjacent Powys in Wales. Several business parks and retail parks are on the outskirts. The city is an important junction of highways to Wales and five railway lines.

The earliest human evidence on the loop of the River Severn dates back more than 10,000 years.

It is possible that the Romans already founded a settlement here, a few kilometers from the town of Viroconium (Wroxeter). But the Anglo-Saxons are considered the actual city founders . Shrewsbury is believed to have originated in the 8th century (an exact date is not known). The earliest documentary mention was in the year 901 . At that time Shrewsbury was part of the Kingdom of Mercia . The city had its own mint and was ruled by a corporation for several centuries . 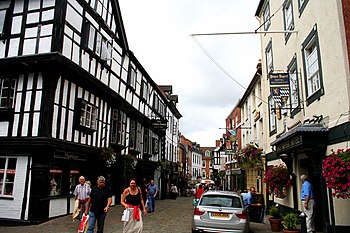 After the Normans conquered England, Shrewsbury and the county of Shropshire became an important line of defense against the Welsh. Roger de Montgomery , a relative of William the Conqueror , was entrusted with control of the county. It was also his job to keep Wilhelm's back free in the fight against the rebellious north. In 1083 Roger de Montgomery founded the Shrewsbury Benedictine Monastery . In 1094, a few weeks before his death, he entered the order. He was buried in the abbey church, where his grave slab can still be seen today.

In 1137 the remains of Saint Winefride were transferred from Wales to Shrewsbury, where they remained until the destruction of the abbey by Henry VIII . Significantly involved in the transfer of the bones was Prior Robert Pennant, who later became abbot. He also wrote a book about this event.

During the War of Succession in England , there was a bitter battle for Shrewsbury Castle in 1138. The besiegers under King Stephen triumphed and occupied the castle. Since then Shrewsbury has been "loyal to the king". The current castle was built much later.

A few kilometers north, in what is now the suburb of Battlefield , the Battle of Shrewsbury took place in 1403 . This battle ended the rebellion of Henry Percy of Northumberland against King Henry IV. , And claimed more than 20,000 dead. During the English Civil War , Shrewsbury was a royalist stronghold and only fell to the troops of Parliament when they were let through one of the city gates by a traitor. This gate, the "St Mary's Water Gate", is now also known as the "Traitor's Gate" (Traitor's Gate).

Shrewsbury is off the main trade routes and grew nowhere near as fast as most other English cities during the Industrial Revolution . Few factories were built here. Between 1830 and 1840 the population even decreased, mainly because of the lack of industry and poor transport connections. At the end of the 19th century, the railroad was the city's main employer. Shrewsbury was spared combat operations during World War II . Today the city still has little industry, but the service sector and tourism play an important role. Shrewsbury is the headquarters of the 5th Division of the British Army .

To this day, even long-time residents argue about how to pronounce the Shrewsbury name correctly. You can pronounce the name both Shruesbury (long u) and Shrowsbury (ou). 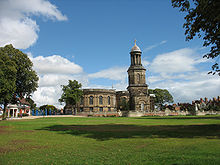 St. Chads Church next to The Quarry City Park

In the 2001 census , there were 67,126 inhabitants; currently the population is estimated at around 70,000. Shrewsbury is the second largest city in the county of Shropshire in terms of population density , smaller than the planned town of Telford and larger than the historic town of Oswestry in northwest Shropshire. Between 2000 and 2002, the town of Shrewsbury to the status of an applied City , but without success. Shrewsbury is the second largest city in the ceremonial county after the autonomous neighboring town of Telford , whose former borough of Shrewsbury & Atcham had 95,850 residents.

Shrewsbury's historic town center is located on a hill that is looped around by the River Severn. It is well preserved and consists of numerous narrow alleys and house passages. 660 buildings are on the list of historical monuments . On the riverside in the middle of the city center is an almost 120 hectare park, whose name Quarry Park refers to a quarry that was located here in the Middle Ages .

The Shrewsbury Castle was shortly after the invasion of the Normans built in 1070 and is strategically located on the steep hill to the town center. The castle received its current appearance in the 13th century.

The Gothic Benedictine abbey , which was built around 1200, is located southeast of the city center . In 1540 the abbey was dissolved by Henry VIII . The monks were evicted and parts of the abbey were sold as a quarry. For the time being, however, the monastery church remained as a parish church. In the 19th century, parts of the church were demolished by Thomas Telford for the construction of a road. In the years that followed, thanks to numerous donations and committed citizens, the church was rebuilt off the road.

Shrewsbury has been the seat of the Roman Catholic diocese of Shrewsbury since 1850 . The neo-Gothic St. Mary's Cathedral was built in 1853-1856. 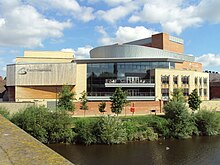 The new theater on the riverside

The Shrewsbury Summer Season has been held every summer since 2004 . Today's festival offers tourists and residents a rich program of art, plays, lectures and concerts. Various events as well as the carnival and the international cartoon and street theater festivals use the streets and squares of the city center. The County Show, the annual folk festival, and major concert events take place on the exhibition grounds or in the city park. The river around the park is used for dragon boat and regatta festivals.

The Shrewsbury Flower Show takes place in Quarry Park in August and is one of the largest horticultural exhibitions in the UK. It lasts two days and has around 100,000 visitors each time. A large fireworks display will take place at the end of the exhibition. Shrewsbury is also known as the "Town of Flowers" for this reason.

A new theater was approved by the city council in 2006 to offer state of the art technology and carry out a major new project. After the new Theater Severn opened in 2009, the old one is being remodeled. A new county, city, and Charles Darwin museum is planned to open in 2012. 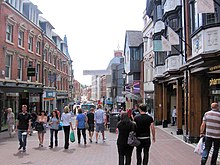 In the Middle Ages, the city was an important axis of the wool trade due to its location on the river. In contrast to the larger cities of England, Shrewsbury never became a center of industry and relied on the development of transport and the service sector as early as the early 20th century. Annual retail sales in 2008 were estimated at £ 541 million, which adds to the city's economic life.

The city has been the seat of the new Unitary Authority ("unitary authority") Shropshire Council since 2009 , which replaced the previous authorities of the county and the district and used their buildings. The public sector is one of the major employers in the city and county these days. In addition, retail , gastronomy and tourism are of economic importance.

Shrewsbury's shopping opportunities are often lauded as the town not only has the traditional high street shops but also extensive and unusual , privately owned specialty shops . There are several main streets and shopping malls with Pride Hill being the main shopping location. This street and the two largest shopping centers offer everything the customer needs.

Due to its historically small business area, the city center has few anchor stores compared to the big cities , although there are two fashion and department stores, Marks & Spencer and House of Fraser . The former Woolworths department store has been replaced by H&M . The range mainly includes the specialty shops on High Street - the traditional name of a British main street - Wyle Cop , Mardol and Dogpole . There are also several small branch stores there. A former hospital was converted into a shopping mall in the 1970s and includes various small shops and gift shops.

Shrewsbury is at the intersection of the major highways A5 ( London - Birmingham - Anglesey ), A49 ( Wigan - Gloucester ) and A53 (to Stoke-on-Trent and Buxton ). In 1992 the Shrewsbury Bypass was opened. It carries road traffic around the outside of the city, with the exception of the northwest suburbs. The A5 links the city eastwards with Telford and the M54 motorway.

The city is served by the companies Transport for Wales / Trafnidiaeth Cymru , West Midlands Railway and Virgin Trains . The railway lines, none of which are electrified , run from Shrewsbury Station to Birmingham New Street (via Wolverhampton ), Manchester Piccadilly (via Crewe ), Chester , Cardiff , South Wales and Aberystwyth (on the Welsh coast).

The majority of the local bus routes as well as regional buses are served by Arriva . Park-and-ride buses connect three car parks on the outskirts with the city center and run every 10 to 15 minutes on weekdays and Saturdays.

The city is also known as the "Gateway to Wales" because of the A5 trunk road and its western railway line.

Shrewsbury is the setting for the Cadfael novels by Ellis Peters . The main character of these historical detective novels is the Benedictine brother Cadfael from the local abbey. In these novels, Ellis Peters dealt with the historical events of the English Civil War from 1135 to 1154 . Some of the novels were filmed for television between 1994 and 1996 with Derek Jacobi in the lead role.

"In Brother Cadfael's Footsteps" is the theme for tourists to explore Shrewsbury on multiple routes marked with a monk's footprint by metal plaques on the floor. Guided tours are also offered.

Shrewsbury is twinned with Zutphen in the Netherlands.