The title of this article is ambiguous. Further meanings are listed under Charles Burney (disambiguation) . 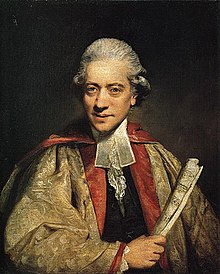 Burney's father was a portrait painter. The young Charles received his schooling first in Shrewsbury and then went to the Public School in Chester . There Edmund Baker, organist at the cathedral and student of John Blow , was his music teacher. Returning to Shrewsbury, 15-year-old Burney continued his music studies for three years with his half-brother James Burney (organist at St. Mary's Church), and then from 1744 to 1746 he was a student of Thomas Arne in London . During this time he was also active as a violin and viola player in Handel's orchestra.

In 1745 Burney contributed music to Thomson's Alfred , which was performed at the Theater Royal Drury Lane , in 1748 his first works appeared in print with the 6 sonatas for 2 violins and continuo . In 1749 he was appointed organist at St. Dionis-Backchurch on Fenchurch Street for an annual salary of £ 30. In the same year he married Esther Sleepe, who died in 1761. In 1769 he married Elisabeth Allen, a widow with three children.

For health reasons, Burney moved to King's Lynn , Norfolk , in 1751 , where he resided as organist for nine years, now earning £ 100 a year. During this time his plan to write a fundamental history of music matured. In 1759 his Ode for St Cecilia's Day (see Cäcilienode ) was performed in Ranelagh Gardens ; In 1760 he moved back to London with his young family in good health. His eldest daughter, Esther (Hetty), who was only eight years old, was admired as a talented harpsichordist. The harpsichord concertos that Burney published soon after his return to London were well received. In 1766 he brought a translation and adaptation of the operetta Le devin du village by Jean-Jacques Rousseau under the title The Cunning Man to the Theater Royal Drury Lane .

The University of Oxford awarded Burney the degree of Doctor of Music on June 23, 1769, with an anthem (18th psalm) Burney was performed (this work was also performed by Carl Philipp Emanuel Bach in Germany in 1773 ). In 1769 Burney published An Essay towards a History of Comets .

Despite his various professional activities, Burney did not lose sight of the plan for a History of Music and left London armed with numerous letters of recommendation in June 1770, traveling from Paris via Geneva , Turin , Milan , Padua , Venice , Bologna , Florence and Rome to Naples . In December 1771 he met Denis Diderot in his apartment on rue Taranne in Paris, and probably also met Anton Bemetzrieder , whose musical textbook, the Leçons de Clavecin, et Principes d'Harmonie from 1771, he admired. His descriptions were published in 1771 as The Present State of Music in France and Italy .

In July 1772 Burney traveled again to the European continent for further research. In 1773 this travelogue was published under the title The Present State of Music in Germany, the Netherlands and United Provinces . Burney's first journey was translated into German by Christoph Daniel Ebeling and printed in Hamburg in 1772; the second journey in translation by Johann Joachim Christoph Bode was also published in Hamburg in 1773. A Dutch translation of the second trip appeared in 1786. The dissertation on the Music of the Ancients from the first volume of Burney's music history was printed in a German translation by Johann Joachim Eschenburg in 1781 in Leipzig. Burney's travelogues in which he a. a. reports of personal encounters with many important musicians such as Wolfgang and Leopold Mozart , Christoph Willibald Gluck or Carl Philipp Emanuel Bach are also of great importance for modern music historiography.

The first volume of his A General History of Music appeared in 1776, followed by the second volume in 1782. The work was completed in 1789 with volumes 3 and 4. Despite critical voices, such as von Forkel in Germany (who criticized Burney's attention to the music performed by traveling musicians and minstrels), the History of Music was largely received with approval, and after John Hawkins is the most important music history in English, even if it is today contains outdated, historical misjudgments.

In 1774, Burney published A Plan for a Music School . In 1779 he wrote a report for the Royal Society on the young William Crotch , who at the time attracted great attention as a musical prodigy. In 1785 he published a report in memory of Georg Friedrich Handel with an excellent biographical description. In 1796 he published Memoirs and Letters of Metastasio .

Towards the end of his life, Burney received £ 1000 for his musical articles written in Rees's Cyclopaedia from 1802 onwards . In 1783 Burney was appointed organist at Chelsea College, and moved there from St. Martin's Street, Leicester Square . He became a member of the Institut Française, and received a state pension of £ 300 from 1806 until his death. He died in Chelsea College and was buried in the local cemetery. In Westminster Abbey a plaque commemorating him.

Burney's famous portrait was painted by Reynolds for Henry Thrale's Library in 1781 . In 1805 a bust by the English sculptor Joseph Nollekens followed . Burney was known to numerous outstanding artists and writers of his time, and at times thought about writing a biography of his friend Samuel Johnson .

Burney's eldest son James was an officer in the Royal Navy and died a rear admiral in 1821; his second son Charles Burney was a scholar and clergyman, and his second daughter Frances (Fanny), a novelist, who later became Madame D'Arblay . Her diaries and letters contain numerous insights into the public and private life of her father as well as his friends and contemporaries. A biography of Burney by Fanny Burney appeared in 1832.

In addition to opera compositions, the following chamber and vocal music: