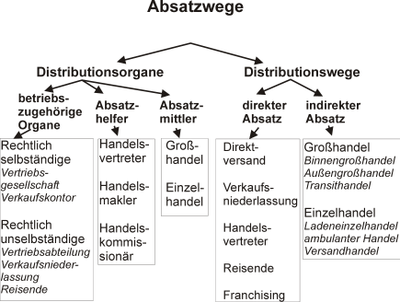 Under retail (in Switzerland , the Netherlands and formerly in Germany: Retail ) are enterprises of trade (sometimes also their trading activity) understood the goods of various manufacturers procure , to a range together and to non-commercial customers , ie consumers or . Ultimate user, sell. In contrast, wholesalers sell to commercial customers, i.e. resellers and so-called bulk buyers ( canteens , canteens and similar). The delimitation criterion is not the quantity of goods sold, but the exclusive or predominant group of customers of the trading company .

The retail trade is the intermediate sales stage between manufacturers, wholesalers and consumers . From the consumer's point of view, it increases the price of goods because it adds its own trading margin to the wholesale price - just like wholesale in relation to the factory price . The retail trade is typically very inventory-intensive , so that high storage risks and capital commitment are associated with it.

Advertising in retail: Addressing specific target groups in front of a butcher shop in Marburg

The retail trade (EH) is extremely diverse, including with regard to

In economic terms, the retail trade is a market mediator between manufacturer and consumer . One speaks of trading as an intermediary . What is particularly important here is its range function , i.e. the pre-selection that it makes from an overall range of goods of one type. This makes it easier for the consumer to keep track of the market . The product range is based primarily on the (presumed) needs of the target group of customers.

Occasionally, the competition between suppliers for the favor of the customer leads to the displacement of non-competitive competitors ( predatory competition ). This can lead to a concentration on a few providers who have a dominant market position ( oligopoly ). In extreme cases, on the supplier side, there is only one supplier left who can thus dictate the prices ( monopoly ). The consequence of such a development is usually a higher price level , which burdens the end consumer, but gives the market-dominating providers higher profits. In the retail sector, for example, branch companies with individual branches can acquire quasi-monopoly positions, which, however, due to competition from other forms of business and supraregional competitors (mail order business, online trading), practically do not allow monopoly pricing, as assumed by the monopoly theory.

The retail sector tries to gain competitive advantages, for example, by lowering the price of goods, by organizing a safe, comfortable, clean and trouble-free point of sale for the customer, by granting credit or by offering additional services and entertainment. Modern retail management also has a wide range of psychotactic and strategic retail marketing tools at its disposal .

For a number of years it has been observed that end consumers, on the one hand, increasingly prefer "aggressively priced" discounters and, on the other hand, those retailers that enable additional benefits through entertainment, experiences and a special ambience, for example urban entertainment centers . This trend is described as polarization of retail or as a “loss of the middle”.

Some retail companies, which were previously assigned to stationary retail based on their business model , are trying to combine the advantages of traditional retail and electronic retailing through a multichannel strategy in order to consolidate their position on the market.

According to Wal-Mart , American agricultural products travel an average of 2,400 kilometers on their way from the field to retail.

These and other tendencies can have problematic effects in terms of urban development , employment policy and spatial planning :

The use of modern IT and the increasing networking in the Internet lead to far-reaching upheavals in business and everyday life. Retail is an industry where this is particularly evident. Today, consumers don't just buy stationary or online, but order cooking boxes, subscription boxes, have intelligent household appliances such as washing machines, refrigerators, water filters or rubbish bins and differentiate between necessary purchases, which can also be automated, and adventure shopping. The digitization of their business opens up new sales opportunities and markets for retailers. Networking has already changed consumer behavior in the long term. Retailers have the opportunity to meet these new demands and wishes of their target groups with innovative offers and solutions. New technologies such as smart data, artificial intelligence , robotics , smarthome , mobile payment options, 3-D printing , virtual reality , drones and many more are playing an increasingly important role and should be incorporated into modern trading processes.

Since the 1960s and increasingly since the 1970s, there have been efforts in Germany in the area of building law and regional planning law to prevent or attenuate the effects that are problematic in terms of urban development and spatial planning. Most federal states have explained the main features of the legal regulations and recommendations in so-called retail decrees.

On the basis of building law and regional planning law, many municipalities and regions endeavor to define in so-called retail concepts according to which aspects which retail operations are to be planned and located at which locations.

The diverse efforts of urban planning and spatial planning control of the retail trade in Germany have not been very successful in many places.

In May 2018, German retailers posted the largest drop in sales in seven years.

The Bitkom eV is the digital association in Germany. Founded in 1999, the association now represents more than 2,600 companies in the digital economy, including a good 1,000 medium-sized companies, over 500 startups and almost all global players.

Purchasing associations or groups are particularly widespread in retail. A purchasing community is a form of cooperation and thus a voluntary association of companies for the purpose of increasing their profitability . By bundling demand, for example in the procurement of merchandise , the individual companies receive improved conditions.

In addition to central purchasing for member companies, other central corporate areas such as marketing, human resources, financing and the legal area are addressed. 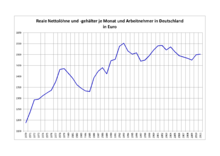 The economic variables “retail sales” and “ real wages ” correlate closely with one another. The table compares the real , inflation-adjusted retail sales in Germany in index points (2005 = 100) since 1989 (excluding trade in motor vehicles) with the real average net wages and salaries per month and employee in Germany since 1989.