Tante-Emma-Laden is a slang term that has been used in Germany and Switzerland since the post-war period for a small retail store that offers groceries and other everyday items. It is significant that the shop is often so small that only one person, often the shop owner herself - the "mom and pop" - works there. Synonymous is also Krämer or Höker , common in Austria Greißler . 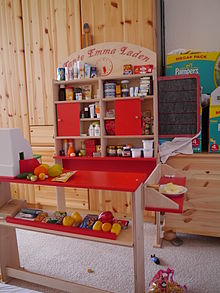 Mainly as a provider of food and grocery (where also the long term still used Kolonialwarenladen was derived), but also other products for daily use ( household goods , textiles , haberdashery , stationery , etc.) they made once common for local goods supply Population. Common elements of personal customer loyalty included purchases "on cover letters ", discount stamps , booklets , free gifts and samples, home deliveries, reservations and special orders on customer request, compilation of gift baskets, cold cuts, etc. Children were always given a little attention. Often the owner's apartment was located directly behind or above the shop, so that a late customer could simply ring the doorbell after the shop had closed and buy something (actually unauthorized). With the legal prohibition of fixed prices from 1974 and the triumphant advance of discounters , the decline of this sales culture was finally sealed.

In rural areas in particular, the mom and pop shops are still used to provide local groceries. Initiatives by (mostly medium-sized) food wholesalers are partially leading to a renaissance of corner shops in some regions. Until 2005, the Austrian REWE subsidiary Billa ran small grocery stores under the name "Emma".

Since the 1980s, the classic mom and pop shops in Germany have been replaced by grocery stores run by immigrants . Nowadays, many immigrants from Turkey run small family shops that are reminiscent of mom and pop shops. With a twinkle in their eye they are called “Uncle Mehmet shops”. In the last few years in particular, these tradespeople have played an important role in providing local supplies to the population in some parts of the city.

To ensure local supplies, village shops are set up in some places . In some communities, cooperative models are gradually being established, for example in Düren and Barmen. There are also attempts by the private sector to revive the mom and pop principle. In October 2011, for example, a corner shop called “Emmas Enkel” opened in Düsseldorf, staging the typical shop in a nostalgic way and at the same time combining it with an online shop and delivery service. In summer 2012, a cooperatively financed "mom and pop shop" was opened in Jagsthausen , which was able to show economic and local political success at least until 2018.

Miniaturized replicas of mom and pop stores are today still popular as children's toys and " shop called". Historical mom and pop shops are exhibited in many open-air or local museums .

In 1976 Udo Jürgens published the song "Tante Emma" (in the corner shop, across the street), which stayed in the charts for almost three months and contrasts personal customer loyalty with the "cold" of discounters. In literature or in films , mom and pop shops are often the setting, for example in the novel Die Blechtrommel by Günter Grass and the film adaptation of the same name .

In the Brockhaus Wahrig it says under the corner shop : “Small retail store; the number of corner shops has continued to decline [after the name Emma, ​​which used to be common; Aunt Emma, ​​the simple average woman with whom you still have a personal relationship as a neighbor, as a contrast to the impersonal self-service shops and supermarkets] ”.

Emma used to be - like Minna - a common term for maids. Heinz Küpper lists the “Aunt Anna Shop”. The word “aunt” is used multiple times, for example for “(older) female person”, and it is common in young people and children. Küpper dates his receipts for mom and pop and mom and pop shops as 1950 ff. And 1955 ff. Also "mom and pop" with the meaning "owner of a small retail store" comes from his evidence from the post-war period.