As a discounter ( pseudo-Anglicism from English discount , 'price reduction', ' discount '), in Austria also discounters , also discount stores or discount trade, are companies in the stationary retail trade that tend to be characterized by a relatively narrow and flat range of goods , simple presentation of goods, often relatively small , but intensively used sales areas and lower sales prices than those of competitors with other types of businessdistinguish. The successful low-price policy of the discounters was mainly based on rigorous cost savings in all operating resources used in the early days .

Discounter center in Dortmund with a Plus , a Schlecker and an Aldi-Nord branch

The term discounter was intended to express that a discount - in particular by circumventing the price fixation on branded goods that was customary in the Federal Republic of Germany until 1974 - is included in the sales price instead of - as was common in the past - only granted to regular customers or via discount stamps . In the course of the “triumphant advance of self-service and discounting”, the successful low-price policy of the discounters, especially in the food retail sector , was based more and more on two specific success factors: on own brands and on the financing advantage that results from over 52 inventory turnover ( inventory turnover ) across the board Assortment results per year. The term " discount " describes the interest discount for bills of exchange submitted before the due date and is therefore incorrect.

Among the energy supply companies , the name energy discounter has established itself for comparatively inexpensive providers, as there are so-called mobile radio discounter . 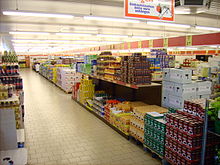 Simple presentation of goods in an Aldi store

In contrast to traditional retailing, discounters limit themselves to fast- moving items and considerably fewer alternative products within a product group. This reduces the costs of warehousing and product range maintenance. In addition, there are no losses in gross profit due to articles that are difficult to sell.

A distinction is made between a normal discounter and a hard discounter . The latter type of shop is characterized by particularly severe restrictions on the range of goods (less than 1,500 products in the range) and sales area (max. 1,000 m²). In the past, discount stores, especially the hard discounters, largely foregone manufacturer brands in favor of their own private labels . In order to open up new groups of buyers, however, the hard discounters are also adding more and more manufacturer brands (“branded items”) to their range. You are targeting price-sensitive but “ brand-conscious ” customers. The same can be seen in the design of the sales areas, where for a long time a purely pragmatic presentation of goods in cardboard boxes and on Euro pallets dominated in the hard discounter sector, now there is also a more elaborate design of the sales rooms.

In the wake of the rapid discount development in the food retail sector, which also allowed both the range and the sales area to be expanded there, the discount idea was also taken up in other sectors (e.g. furniture discount, photo discount, shoe discount ), whereby their delimitation from the independent type of operation of the specialist store is determined by the personal advice provided here.

Like other stationary retailers, most food discounters now also use the Internet to present and provide information about articles. In particular, electrical goods, small furniture, children's clothing and toys ( non-food items) can be sold very well in the online shops . Few also offer groceries for sale online. 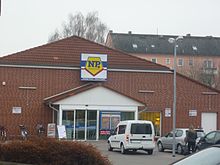 Discounters operating in Germany are Aldi (divided into Aldi Süd and Aldi Nord), KiK (to Tengelmann ), Lidl (to the Schwarz Group ), Netto Marken-Discount (to Edeka ), Netto Supermarket (to the Salling Group ), NKD , Norma , NP-Markt (to Edeka), Penny (to Rewe Group ), Takko and TEDi (to Tengelmann) and KODi .

The manifestations of relationship, company and employee trade that revived in the Federal Republic of Germany at the end of the 1950s are to be seen as harbingers of discount trade . This time, such shadow forms of the (food) retail trade did not emerge from a shortage of goods , but rather to undermine the rigid price fixing for almost all branded goods at the time. Existences that appeared to be “price breakers” and operated such (sometimes illegal) businesses often settled their small businesses in backyards and garages. Their importance was initially minor. However, the first wave of discounts was “a symptom of a rising awareness of prices”.

The first sustained successes with the discount principle were achieved by wholesalers such as Hugo Mann (Wertkauf), Gerhard Ackermans ( Allkauf ) or Erivan Haub ( Plus ), especially Terfloth & Snoek, which in 1957 in Bochum with its Ratio wholesale market based on the new business principle of the pick-up wholesale market (self-service, cash payment, self-collection) helped achieve a breakthrough.

The year 1962 was a milestone for the rapid discount development in German retail that soon followed. That year, the brothers Karl and Theo Albrecht converted the first branch of the inherited Essen-based grocery store company according to the strict rules of the discount principle. This concept of their first Aldi store - only about 300 items in the range, modest shop fittings, sale from the pallet or from boxes , permanently low prices - should soon be followed by many more; also from competitors. In November 1962, under the technical supervision of the Rewe-Genossenschaft, a purchasing cooperative was founded for the small "discount stores" which were viewed with suspicion by industry and economic policy, the Für Sie Handelsgenossenschaft eG  - "a connection that was unprecedented in Germany until then: the connection of the tried and tested cooperative idea with the youthful, almost impetuous idea of ​​the discount trade. ”Attempts with a discount department store WDW in 1966 were less successful, but the way for new discount types was paved, like the large-scale ones, on a business level active “hypermarkets”, today's hypermarkets.