A department store is a large, usually multi-story retail store with a large sales area , in which goods of all kinds are offered for sale. 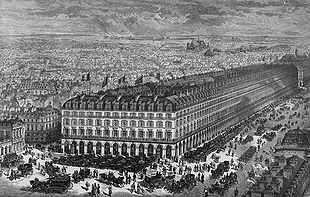 Les Grands Magasins du Louvre , one of the models for the novel Ladies' Paradise (1877)

The classic inner-city department stores developed in the metropolises of the industrializing countries from the 19th century. France and the USA were particularly exemplary in this regard . More than almost any other form of operation of the retail industry, it is the department stores managed by people with consumer goods to supply from all cultures and to emphasize the cultural function of commerce.

Precursors of the department stores were the covered shopping arcades of the early 19th century, in which hundreds of oriental model of retailers jointly exhibited their products, for example, in 1825 the Grand bazar ( German  "Grand Bazaar" ) in Paris , with over 300 individual shops. Similar to the Bazar de l'industrie in 1827 , a building complex already centered around a multi-storey hall. This relationship between the market hall and the community warehouse continues to this day .

central atrium in the Althoff department store in Leipzig, 1914

Large shops organized into departments existed in the Anglo-Saxon countries as early as the first third of the 19th century, albeit in a rather unadorned form. Around the middle of the 19th century, however, starting from Paris, the centrally managed, modern, inner-city wholesale department store, characterized by an impressive, openly presented abundance of goods, fixed prices , free entry, generous exchange rights , intensive advertising and thus large sales, spread relatively small profit premium . This type of distribution form was described in 1884 by Émile Zola's novel Au bonheur des dames , ( German  The Ladies' Paradise ) as an example. Le Bon Marché , founded in 1852 by Aristide Boucicaut , provided the model here, but also its competitors, the Grands Magasins du Louvre , founded in 1855 by Alfred Chauchard , the department store À la Belle Jardinière (1856), the Printemps or Printemps founded in 1865 by Jules Jaluzot La Samaritaine , which Ernest Cognacq and Marie-Louise Jaÿ also founded in 1865 . After 1894, the Galeries Lafayette developed from a small laundry shop . Meanwhile, Harrods opened in London in 1834 .

In Germany, large department stores were founded a little later. The founders of modern department stores often came from the textile trade , for example Boucicaut, Marie-Louise Jaÿ, August Herzmansky , Max Emden and Alfred Gerngross . The department store was the first of those modern wholesale forms of retail sales in Germany that oppressed the role of the small merchant with their overpowering competition. There was therefore early on - often morally tinged - criticism of the department store system, the demand for own department store taxes and attempts to inhibit the development of department stores. In Central Europe, where many of the department store founders were of Jewish origin, there was also a clear element of anti-Semitism around 1900 , which was also brought out in the anti-capitalist rhetoric of National Socialism . In its party program, the NSDAP demanded, among other things, the immediate communalization of the large department stores and their leasing to small business owners at cheap prices. The Kampfbund for the commercial middle class under Theodor Adrian von Renteln called for the closure of all department stores, uniform price stores, consumer cooperatives and chain stores. After the seizure of power of the NSDAP occurred while but then to individual actions, such as the department store storm in Braunschweig and systematic " Aryanization " of the modernization process in the retail sector has been characterized but not stopped. After 1945 and especially from the 1960s onwards, the traditional department stores were also among his losers. With the advance of self-service and suburban shopping centers , they lost their location and price advantages and in many countries fell into a massive crisis - into the "downfall in Sea of ​​goods ”, which her biographer Klaus Strohmeyer conjured up early on.

Up until the 1980s there were five large department store groups in Germany: Karstadt, Kaufhof, Hertie , Horten , Quelle . Besides operated Neckermann and purchase ring 's major department stores. In the 1970s / 80s, the large corporations tried to expand their business with hypermarkets (including Otto Versand ), but quickly failed. In contrast, chains of cheap department stores or department stores without a full range have a longer tradition. Well-known names were: Bilka (Hertie), Kepa (Karstadt), Kaufhalle (Kaufhof), DeFaKa (Horten) and Woolworth .

The self -service department store ( SB-Warenhaus for short ) is to be distinguished from the department store , which also has an area of ​​at least 3000 m², but focuses on the food sector (e.g. Kaufland , Marktkauf and Real ). The hypermarkets offer a wide and deep range in the food sector and are characterized by a permanent low price or special offer policy. Their locations are mostly car customer-oriented.

Well-known department store chains in Germany include Karstadt and Galeria Kaufhof . In 1879, the Jewish merchant Leonhard Tietz opened his first smaller textile retail business in Stralsund , and then, following the economic logic, moved to what is now Wuppertal -Elberfeld, which at that time as an independent town of Elberfeld, together with its twin town Barmen, formed the first large industrial agglomeration in continental Europe and headquartered most of the large textile companies from which he obtained his goods. He moved the company headquarters to Elberfeld and founded the first classic French department store in Germany in 1885 on Herzogstraße . He took up the department store idea from the French, who had invented this multi-department system in one house. A branch in Cologne followed in 1891 and in 1905 Tietz founded the first stock corporation of a department store. Also in 1905, the two department stores Oberpollinger on Neuhauser Strasse and Tietz on Bahnhofplatz opened in Munich , followed by Roman Mayr (now Galeria Kaufhof) on Marienplatz.

The Berlin Kaufhaus des Westens ( KaDeWe ), which opened in 1907, is very well-known and , with its 60,000 m² sales area, has been a symbol of the material prosperity of the western world for decades . Like the Alsterhaus, which opened in Hamburg in 1912, it belonged to the Hertie Group (today Karstadt). In 1912 Germany's second largest department store, Karstadt MÖ , opened in Mönckebergstrasse in Hamburg , which today, together with the sports store, has a sales area of ​​43,700 m².

Other large department stores are Karstadt München Bahnhofplatz , which previously belonged to Hertie, with almost 40,000 m² of retail space, Galeria Kaufhof on Hohe Strasse in Cologne (36,000 m² of retail space), Galeria Kaufhof on Berlin's Alexanderplatz (36,000 m²), and Munich's Oberpollinger department store (33,000 m²) m²), Karstadt in Frankfurt / Main (approx. 34,000 m²) and in the Bremer Obernstraße (33,600 m²) as well as the Breuninger main building in Stuttgart (35,000 m² sales area), which, however, places a clear focus on clothing and is therefore more likely to be bought than Department store is. Dresden was the scene of the third opening of a large department store in 1912. The Residenz department store, which burned down in 1945 and was demolished by 1953, opened its doors there on Prager Straße . Since 1995 a Karstadt department store with 30,000 m² sales area has stood in its place .

Internationally known department stores, some with smaller branches in other cities, are u. a. Printemps and Galeries Lafayette in Paris , Harrods , Liberty’s and Selfridges in London , El Corte Inglés in Madrid and all major cities in Spain, Macy’s , Saks Fifth Avenue and Bloomingdale’s in New York , Neiman Marcus in Dallas and other cities in the USA, La Rinascente in Milan , Rome and other Italian cities, Takashimaya and Mitsukoshi in Tokyo , the GUM department store in Moscow and the Gostiny Dwor in Saint Petersburg . 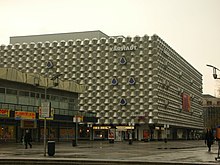 The facade of the former Centrum Warenhaus Dresden ( Prager Strasse)

After the war , especially in the 1950s, Germany took on a pioneering role in department store architecture, as the city ​​centers were destroyed. The city planners were looking for ways to revitalize the inner cities, with department stores in central locations acting as points of attraction to strengthen or relocate existing shopping areas. Although in most cases new buildings were built, some old parts of the building, some of which had been damaged by the war, were integrated into the new buildings and covered with a uniform facade. The architecture and, above all, the windowless facade were increasingly incorporated into the company's corporate design. The first examples are the new buildings by Marcel Breuer for the Dutch chain De Bijenkorf and the use of the hydrangea tile by Egon Eiermann . Kaufhof used white facade panels. The Centrum Warenhaus in the GDR had all of its buildings designed by well-known metal designers in the country.

Despite the aspirations of the “ car-friendly city ”, the biggest problem was the lack and the creation of parking facilities for customers. Many of the early parking garages were therefore created as an architectural unit in connection with department stores. The range of goods offered by the department stores also includes gastronomic offers, such as restaurants and fast-food restaurants , which are often intended to attract visitors to the house with low prices.

The ornamentally gridded windowless facades have been opened and loosened up more and more since the 1980s. The department stores were also combined with shopping centers .