The Real Group Holding GmbH , headquartered in Dusseldorf (proper spelling: real , by 2017 real, - ) operates a retail chain in Germany with hundreds of hypermarkets . Around 75 percent of sales are generated from the sale of food . Real also offers household goods, electrical appliances, toys, books, media, textiles and shoes, sporting goods and stationery. In addition to branded items, several retail brands are offered: TiP , real Quality , Wunderbärchen and real Bio . In 2000 Real was one of the founders of the Payback customer loyalty program .

Real was a subsidiary of the Metro group. In February 2020, the sale was announced to a group of investors that announced significant restructuring. Real has been owned by the Russian financial investor SCP since June 25, 2020. 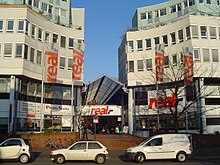 A real market in Cologne-Sülz

The Future Store in Tönisvorst on the Lower Rhine

The real GmbH , formerly Real SB Warenhaus GmbH , established on 1 September 2015 is one of Dusseldorf based in Dusseldorf Real Group Holding GmbH and operates 272 stores (as of 2020), all of which are in Germany.

Starting in 2003, some Extra stores were renamed Real and 119 Extra stores were sold to the Rewe Group . In 2004 there were still 436 Extra stores with 12,600 employees who generated net sales of 2.8 billion euros. In 2005 the number of locations of the two chains in Germany decreased from 708 to 552 stores. Another 40 stores were located abroad. In March 2006, the first Romanian store opened in Timișoara , followed by the first store in Ukraine on October 16, 2009. In 2006, Real took over the German department stores from Walmart , who withdrew from Germany, and the stores of the French department store chain Géant in Poland.

Real was created in 1992 from the merger of the divi , basar , Continent , esbella and real- kauf chains . Massa (see Karl-Heinz Kipp ), massa-Mobil , Meister , BLV , Huma and Suma followed later . Each of these companies was regionally successful for decades. In 1998, 94 hypermarkets from Allkauf and 20 hypermarkets from the southern German Kriegbaum Group were added. In May 1999, five Extra hypermarkets switched to Real.

In 2000, the Metro Group tried to make its domestic subsidiary more profitable again with the “Strategy 2006” cost-cutting program. To this end, personnel costs should be reduced by a high double-digit million amount. In 2003, the group began to amalgamate key tasks in the central administration of the previously independent companies real, - SB-Warenhaus GmbH and extra Consumer Markets GmbH . The legal merger of Extra and Real was completed in mid-2004. In connection with a scandal about rotten minced meat and the moderate success of the expensive advertising campaign “Get it easy”, the company's management was replaced in 2005. 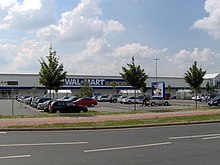 Walmart in Pattensen near Hanover

In July 2006 it became known that the Metro would take over the 85 German Walmart branches, the larger branches being run under the name Real and the smaller ones under the name Extra. With the closure of the headquarters of Walmart Germany in Wuppertal, around 600 jobs were affected in the third quarter of 2007. In addition, 14 Walmart branches were given up because Real stores already existed in the immediate vicinity. The locations in Aachen , Bergkamen , Delmenhorst , Gelsenkirchen , Günthersdorf , Hagen , Hanover-Wülfel , Nordenham , Pattensen , Ritterhude-Platjenwerbe , Salzgitter-Bad and Wilhelmshaven were affected . The Düsseldorf and Sigmaringen branches were closed in June 2006. The Düsseldorf branch was demolished in 2007 and Germany's largest Edeka supermarket was built on the site by 2009.

At the end of October 2007, a new branch opened in Lübeck, which was the first German department store to be open from Monday to Saturday until midnight. This market has been criticized for paying wages below the retail tariff. In November 2007, around 3,000 employees from 80 Real branches took part in strikes that the service union Verdi had called in the North Rhine-Westphalian retail sector. The union demanded 4.5 percent more salary and a minimum wage of 1,500 euros for full-time employees. There is also a dispute about the cancellation of late and night surcharges demanded by employers.

In January 2008 it was announced that the Rewe Group would acquire the consumer chain Extra on July 1, 2008 from Metro AG. The name Extra should already disappear in the second half of 2008 with the reflagging of the markets to Rewe. The franchise brands Comet and Bolle, under which 61 of the 306 stores ran, were initially continued. The franchise headquarters went to the Rewe Group. With the purchase, Rewe wanted to strengthen its market position in retail and take over the 9,700 employees. The Federal Cartel Office approved the planned purchase without any conditions.

By the beginning of 2010, the Metro Group wanted to part with 27 other locations, including the stores in Berlin, Rostock (on February 28, 2010) and Bremen. In January 2011, the Metro Group announced that it would close the Real Logistics Service Center (LSZ) in Kamen with around 120 employees and pool accounting in three "Shared Service Centers" worldwide with locations in Alzey in Germany as well as in Poland and India .

In 2013, the French retail chain Auchan took over the Real stores in Central and Eastern Europe. Auchan took over the operational business and the real estate in Poland , Romania , Russia and Ukraine for 1.1 billion euros. A total of 91 supermarkets and 13 shopping centers changed hands. In 2011, Real generated sales of almost 2.6 billion euros (excluding VAT) in the four countries mentioned. 20,000 Real employees worked in the countries mentioned. The German and Turkish supermarkets were not affected by the takeover.

In June 2014, the Metro Group signed an agreement with Hacı Duran Beğendik to sell the Real business in Turkey. Real focused on the German business. The parties have agreed not to disclose the purchase price. The sale included the twelve hypermarkets and the company headquarters. Real Turkey generated sales of 256 million euros in the 2012/13 financial year and employed around 1,800 people there. August 2016, the Turkish Real markets were under state administration. The Real market in Antalya was closed in October 2016.

In June 2015, Real terminated the collective agreement for its employees. Later, the company announced the closure of eight stores in 2016, including for example, the branch in Gesundbrunnen Center in the Berlin district of Mitte . On June 2, 2016, Real and Verdi agreed on a future collective agreement with a term until the end of 2019. In December 2016, one of the two branches in Munich was also closed.

At the beginning of 2016, Real took over the Hitmeister.de shopping portal, which was founded in 2007. This domain was later given up and online trading has been under the domain real.de since then. This shopping portal is a trading platform similar to Amazon , on which a wide variety of retailers offer their goods.

In the course of the demerger of the Metro Group, Real's activities were transferred to Metro Wholesale & Food Specialist AG in 2016 . The latter has been an independent retail group since July 12, 2017.

After eight failed rounds of negotiations for a new collective agreement with ver.di , Real announced that it would rename METRO Services GmbH to real GmbH and then split off its business in order to no longer be tied to ver.di. Real stated that the reason was to create “competitive pay structures”.

On September 13, 2018, Metro announced in a mandatory announcement that it wanted to sell Real. In May 2019, Metro announced exclusive negotiations for the sale of Real as a whole by the summer to a consortium led by the Redos Group. At the beginning of July 2019, the company confirmed that it had received an offer from real estate investor X + Bricks together with investor SCP Group. X + Bricks was founded in 2018 by the former CEO of the Corestate Capital Group , Sascha Wilhelm, with a focus on grocery retail real estate ; the SCP Group (Sistema Capital Partners) is a subsidiary of the Russian financial group Sistema ; The two companies had joined forces for the offer and also secured support from Kaufland .

In December 2019, Metro announced that the negotiations with Redos had ended and would henceforth be conducted exclusively with the consortium of X + Bricks and SCP Group. In contrast to Redos, the consortium intends to initially take over Real as a whole without Metro's minority stake, only later to sell parts to market participants and to continue some stores under the previous name of Real. The purchase agreement was concluded in February 2020.

In March 2020, Real announced the closure of the first seven stores. At the beginning of April it was announced that Edeka and Kaufland are taking over a total of 141 department stores. Kaufland plans to incorporate 88 stores and Edeka 53 stores. The first stores are expected to change hands in the fourth quarter of 2020. The entire process could take 18 months. The financial details of the deal have remained under wraps. On June 26, 2020, the takeover of the online shop, real.de, by the Schwarz Group became known. Online trading is to continue under Kaufland. On June 29, 2020, the closure of eight further branches was announced.

The public prosecutor's office in Oldenburg investigated in March 2005 because of violations of the food law and the minced meat ordinance . In two branches, in Laatzen and in Hanover , employees had been caught by a former employee with a hidden camera as they were repackaging and labeling minced meat that was over the shelf life in order to resell it in the market. The investigation was then expanded to four branches. Investigations were based on the suspicion that the company management could have centrally controlled the repackaging of meat. After a thorough examination, this suspicion could not be corroborated, so that individual acts of the employees on site are assumed.

In addition to the conventional cash registers, Real has opened self-service checkouts in some branches , which can save jobs. Customers scan their goods themselves at the self-service checkouts, pack them up and pay in cash or cashless. An employee follows the processes at the checkouts and can, for example, authorize the sale of alcoholic beverages or other products, the sale of which is subject to legal restrictions.

From November 2, 2004, the radio frequency identification technology (RFID) was gradually introduced in the markets and is to be expanded. RFID markings on the goods enable complete control of the flow of goods through contactless identification, control and tracking along the entire process chain. The systems are designed to make ordering, storage and transport significantly easier. In the long term, part-time jobs in the low-wage segment are expected to disappear. The criticism of the RFID technology concerns the data protection aspect, through the traceability of the goods even after the sale, as well as - through carried cards - also the customer himself.