The title of this article is ambiguous. Further meanings are listed under Hückelhoven (disambiguation) .

Hückelhoven (formerly Hückelhoven-Ratheim ) is a town in the Heinsberg district in North Rhine-Westphalia , near the border with the Netherlands .

Hückelhoven owes its development from a village to a town to the coal mining industry; The Sophia-Jacoba colliery was opened in 1914 . In 1997 this mine (the last one in the Aachen area ) was closed.

Hückelhoven is mainly located in the valley of the Rur River and in the Baaler-Wassenberger Riedellandschaft . The Brachelen district is located on the Aldenhovener loess plate .

Coal seams of the Brüggen-Erkelenzer Horstes lie underground. The city belongs to the Aachen district . Sand and gravel , deposited by the Rur, are dredged in the groundwater area, resulting in large quarry ponds. The lowest point of Hückelhoven is around 40 m above sea level on the Rur near Ratheim; the highest point is 100 m above sea level on the edge of the Rurgraben between Ratheim and Kleingladbach. However, two spoil heaps, which were created during the mining era, protrude far beyond that with 120 m (Millicher heap) and 140 m above sea level (Ratheimer heap).

The neighboring communities are listed in clockwise order, starting in the north: City of Erkelenz , City of Linnich , City of Geilenkirchen , City of Heinsberg and City of Wassenberg . Linnich belongs to the Düren district , the other cities are all in the Heinsberg district.

The place name Hückelhoven with its place name ending in -hoven speaks for a foundation in the Carolingian to late Carolingian times (8th / 9th centuries). Modest grave finds from the northern edge of the city from the 6th century, however, show that settlement began as early as the early Middle Ages.

In 1221 a Sibertus de Hukelhoven is mentioned in a document from the Dalheim monastery. 26 years later (1247) a knight Reinard von Hückelhoven, Reynardo milite de Hukilhoven, appears in a document that had the Hückelhoven house built. In 1350 the house Hückelhoven ( Heukelhoven ) appears in a fiefdom directory of the Wassenberg lordship. A Ludwig Mulstroe is enfeoffed with the Hückelhoven farm around 1470. At the end of the 16th century, this courtyard was structurally redesigned and a two-story brick building was created, "the castle".

In the Middle Ages and early modern times, the place belonged to the Doveren court in the Wassenberg office of the Duchy of Jülich . In 1798 the French administration raised Hückelhoven to Mairie (mayor's office), and in 1799 the neighboring towns of Hückelhoven and Doveren were merged to form Mairie Doveren. 17 years later (1816) this division was retained under Prussian rule, Hückelhoven now belonged to the Prussian mayor of Doveren.

Wall relief on the town hall

In 1935 the new municipality of Hückelhoven was formed from the places Hückelhoven, Hilfarth, Ratheim, Millich, Schaufenberg and part of Kleingladbach. In 1950 it was named Hückelhoven-Ratheim. It was not until 1969 that the then municipality of Hückelhoven-Ratheim was raised to the status of town. On January 1, 1972, the municipalities of Baal, Brachelen, Doveren, Rurich and the village of Altmyhl were incorporated. The legal basis for the incorporation was the law on the reorganization of the communities and districts of the reorganization area Aachen of December 14, 1971, in short Aachen law .

At the end of October 1944, the Gestapo set up a “ labor education camp ” in Hückelhoven , an “emergency prison”. Several people, including forced laborers, were shot dead.

The city is a former mining town , where the most modern coal mine in Europe, the Sophia-Jacoba union , shaped the cityscape and lifestyle for around 80 years. The colliery was closed on March 27, 1997 and Hückelhoven has experienced rapid and sometimes dramatic change since then. Due to the closure of the colliery, the percentage of unemployed is well above the national average, but due to numerous aid measures it is still relatively low compared to the Ruhr area. A first trend-setting goal to improve the attractiveness of the city center was achieved by private investors through the appealing conversion of the “Alte Post” on Parkhofstrasse into a lively business and service center. In autumn 2004 the “Hückelhoven Center” was opened in Hückelhoven, which has since drawn many people to the city on the Rur. New shops, offices and medical practices were built on Wildauer Platz and were completed in April 2010.

There is a Catholic church in most of the villages .

In the 16th century a small community was formed that was close to the Anabaptist movement. This later became a reformed parish that built a church in Hückelhoven in 1688. The current church building dates from 1890/91. The Protestant parish of Hückelhoven also maintains churches in Hilfarth and Schaufenberg. A second evangelical congregation is located in Baal.

Due to the influx of mine workers, new religious communities formed in the city area in the 20th century. Today there are congregations of the Baptists , the Free Apostolic Pentecostal Church , the New Apostolic Church and the Jehovah's Witnesses .

In the 1970s, Turkish guest workers founded a Muslim community that maintains a mosque in both Hückelhoven and Schaufenberg .

As part of the law for the reorganization of the communities and districts of the reorganization area Aachen , dated December 14, 1971, also called Aachen law for short , the communities Baal, Brachelen, Doveren, Rurich and the locality Altmyhl were incorporated on January 1, 1972. The community was named Stadt Hückelhoven. The area of ​​the municipality grew from 27.48 km² to 60.40 km² and the population from 24691 to 34072 inhabitants.

The population growth was caused by the colliery, until around 1960 miners from other parts of Germany moved here, for example from the Ruhr area and Fulda . After 1960, the colliery campaigned abroad, especially in Turkey, for workers and the first guest workers came to Hückelhoven. 46 nations were employed at the mine.

Nowadays, Hückelhoven is an attractive place to live due to the good transport links to the conurbations of the Rhine and Ruhr, but also in connection with relatively low property prices. The city of Hückelhoven and the district of Heinsberg are among the few cities or districts in North Rhine-Westphalia that continue to have a growing population.

Since the local elections on May 25, 2014 , the 44 seats of the city council have been distributed among the individual groups as follows:

The councils of the FDP and Free Voters have come together to form a parliamentary group.

The city was granted the right to use a coat of arms with a certificate from the District President dated October 25, 1972.

Meaning: The stars stand for the four former communities Alt-Hückelhoven, Ratheim , Hilfarth and Kleingladbach . Stars were chosen because a six-pointed silver star is shown in the coat of arms of Mr. Ollmissen von Haus Hückelhoven. Hammer and mallet represent the coal mining industry in the city. The crossbar comes from the coat of arms of the von Hückelhoven dynasty.

Hückelhoven maintains partnerships with the English Hartlepool (since 1973), with the French Breteuil-sur-Iton (since 1987) and a friendship with the Brandenburg city of Wildau (since 1991). 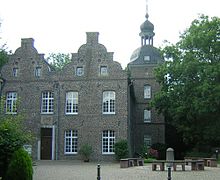 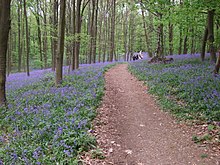 The "forest of blue flowers"

Diving and sailing are possible on the Adolfo lake, swimming in the indoor swimming pool Hückelhoven and the bathing lake Kapbusch .

The city is integrated into the cycle path network of North Rhine-Westphalia . The RurUfer-Radweg , which connects the highest elevation of the High Fens with the confluence of the Rur into the Meuse , and the NiederRheinroute , which includes a network of cycle paths across the entire Lower Rhine area from the Netherlands to Düsseldorf, run through the city.

In 1911 the Jülich – Dalheim line (Dalheim – Wassenberg – Ratheim – Hückelhoven – Baal line) was opened. In today's urban area Rurich, Baal, Doveren, Hückelhoven and Ratheim had a train station. 1968 the passenger traffic from Baal to Jülich was stopped, later also for the area Baal-Rurich-Linnich the goods traffic. After the tracks were removed, there is now a cycle and hiking path on the former track. The Rur Valley Railway is considering extending the reopened Jülich – Linnich line to Baal, which would amount to reopening the old line.

Passenger traffic on the Dalheim – Baal section was discontinued in 1980. The colliery had its own connection to the rail network. Today this route is used by the briquette factory. The Aachener Verkehrsverbund originally envisaged a reactivation of the route (Wassenberg) - Ratheim - Baal for passenger traffic in its 2013 target concept . However, these plans are countered by the intention of the city of Hückelhoven to partially build over the route to build a bypass, which would make a later reactivation more expensive.

Hückelhoven is also connected to the Aachen – Erkelenz – Mönchengladbach – Düsseldorf railway line at the Brachelen stop ( category 6 station ) and Baal station ( category 5 station ) . The latter is used by around 2000 passengers per day and was renamed "Hückelhoven-Baal" in 2002 due to its proximity to Hückelhoven. The station is therefore often referred to by local politicians as "Hückelhovener Bahnhof", which is not very popular with Baals. The station is in great need of renovation and is to be rebuilt by the city over the next few years (including reactivation of the elevator). The train station has 2 bus stops and a P + R area.

Rail connections from Hückelhoven station to Baal (as of December 2019):

Rail connection at Brachelen stop (as of December 2019):

There are bus connections to the individual districts and neighboring towns.

There is also the Rurufer cycle path , which connects the Eifel with the Dutch border.

Due to Hückelhoven's good location, it is close to many larger cities that can be reached quickly thanks to these good connection options:

Since the 1970s, the various districts have been victims of so-called urban sprawl for various reasons : Important infrastructure, such as the Jülich – Dalheim railway line and various cinemas , was lost. In addition, the business world of the traditional centers became less important, as consumers increasingly used Hückelhoven (center) as a shopping city. This development was so extreme that today (2009) there is not even a grocery store in the village center of Ratheim or in most of the neighboring villages. Therefore, after the big projects for the shopping world in the inner city of Hückelhoven, the individual village centers are again the focus of the city. The “Ratheim Center” was opened in Ratheim with 2 grocery stores and various retail stores. A similar center was also built in Hilfarth (2014). Hückelhoven has meanwhile become one of the district's shopping cities, as an OBI and a scooter are being opened on the old colliery, another specialist market center is being built on the site of the mining vocational school and a decathlon and a small arena are being planned.

Some remnants, for example a chimney and the briquette factory, as well as many empty coal trucks and an open-air gantry crane were removed from 2008 to 2009 to make room for the expansion of the Hückelhoven Center.

Cities and municipalities in the district of Heinsberg