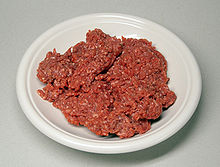 Minced meat , even minced , minced (österr.), Gewiegtes , Mett or hash , is more or less finely chopped coarsely entsehntes muscle meat , that the only adding more than 1% salt may contain. Today it is no longer chopped or weighed with a knife , but made using a meat grinder . Since the muscle fibers are severely chopped up, it cooks much faster than whole pieces of meat and can also be eaten raw. Raw minced meat is perishable very quickly due to the increased surface area and partially destroyed cell membranes .

Minced meat is mainly made from raw pork , beef and veal , mutton and lamb , game and poultry or mixed cooked leftover meat or sausage leftovers (cuts or sausage ends).

Examples of minced meat dishes are meatballs , Königsberger Klopse and meat loaf ; Often used as a filling e.g. B. in cabbage rolls and stuffed peppers. Numerous types of sausage are made from minced meat, for example the Thuringian Rostbratwurst .

EU minced meat is minced meat that is produced in companies with a special EU approval under special hygienic requirements. It is usually packed in a protective atmosphere . This gas mixture consists of oxygen and carbon dioxide . Due to the proportion of oxygen, the red color of the meat is retained longer, the gray coloring is slowed down, and the proportion of carbon dioxide in the pack inhibits the growth of microorganisms. The minced meat can be kept for a few days longer. The use-by date for EU mince can be determined by storage tests by the manufacturer itself, it refers to a storage temperature of not more than 2  ° C . This temperature is normally not reached in normal household refrigerators with their storage temperature of 4–7 ° C. Special cooling or freezing compartments are required for this.

The handling of minced meat is regulated in the Federal Republic of Germany in the Animal Food Hygiene Regulation (Tier-LMHV) of August 8, 2007. This ordinance for the implementation of provisions of Community food hygiene law contains and replaces the provisions of the former minced meat ordinance . Fresh minced meat may then only be sold on the day of production.

Escherichia coli , salmonella and listeria are among the bacteria that grow relatively easily in minced meat and can cause disease in humans . In order to hinder the reproduction of bacteria and thus also to increase the shelf life, attempts are being made to add lactic acid bacteria to industrial production, as is the case with yoghurt and cheese . The effectiveness of methods developed in the USA in which ammonia is added to minced meat to kill bacteria is controversial.

The Stiftung Warentest has mixed minced meat (half beef, half pork) in 2015 investigated and the results in the issue 2/2015 of test (Journal) published. Half of the products tested contained germs such as Escherichia coli (also known as E. coli bacteria) and salmonella . In 8 out of 21 cases, the testers also came across antibiotic- resistant germs.