Bergkamen is a middle district town in the Ruhr area , North Rhine-Westphalia , Germany . Administratively part of the town to the district of Unna in Arnsberg and the Regional Association of Westphalia-Lippe and the Ruhr Regional Association . In terms of regional planning, Bergkamen is a medium-sized center in the outskirts of the upper center of Dortmund . The new municipality of Bergkamen, created on January 1, 1966 through the merger of five smaller municipalities ( law on the merger of the municipalities of Bergkamen, Heil, Oberaden, Rünthe and Weddinghofen, district of Unna ) - Overberge was added two years later - was earlier as the largest Well-known mining city in Europe. Today Bergkamen is in the midst of economic structural change and is known for its variety of sports and leisure activities and its special cultural offerings.

Bergkamen is located in west central Germany in Westphalia on the eastern edge of the industrial Ruhr area in the immediate vicinity of the cities of Hamm and Dortmund . The Hellweg with the adjoining low mountain range of the Sauerland runs south of the city , while the Münsterland borders Bergkamen to the north . In the east lies the fertile Soest Börde .

The highest point in the urban area is 148.5  m above sea level. NN the "Adener Höhe" on the artificially raised heap of large wood , a landmark in the Ruhr area .

In the immediate vicinity are: (direction, city size, district membership)

The table is arranged according to the number of inhabitants in the various districts of Bergkamen:

The history of the area around the city of Bergkamen goes back to the Romans . In the late summer of 11 BC Chr. Was part of the planned expansion of the Roman Empire from the Rhine to the Elbe by Roman legions under the command of the commander Drusus , a stepson of Emperor Augustus , in their advance along the lip on a hill in today's Berg Kamen-Oberaden the Roman camp Oberaden , a legionary camp for two legions and auxiliary troops. In the year 8 BC After the subjugation of the Germanic tribes of the Sugambrer and the Brukterer , the camp was given up again as planned.

Since the discovery of the Roman camp in 1905 by Pastor Otto Prein , parts of the complex have been explored in several excavation campaigns. The 56-hectare warehouse is one of the most important prehistoric monuments in Westphalia. It is the largest Roman military camp north of the Alps and the oldest known camp in Westphalia. Some finds and reconstructions are in the Bergkamen City Museum.

From the Saxon - Franconian times a still clearly recognizable double wall ring system in the northeast of the city area, the so-called Bumannsburg , comes under protection as a ground monument.

To the south of Autobahn 2 in the Ostfeld corridor, there were three early medieval graves with additions. It was a south-north-oriented women's grave and a west-east-oriented men's grave. The man had been given a lance , a shield and a bundle of arrows, along with a belt set. A comparable set is otherwise known from Xanten and the 7th century (type Civezzano, which is otherwise only known from Bremen-Mahndorf in northern Germany ). His head was found to be pointing westward. A third grave, probably of a very small person or a child, was hardly preserved in traces, but could be dated to the 7th century. Further above the graves there was only a pit with fire rubble from the middle of the 11th century.

Immediately to the east of Bergkamen's city limits, in the area of ​​the city of Hamm, is the Reck house , a noble residence from the 15th century.

History of the 19th and 20th centuries

Up until the end of the 19th century there were only small villages and individual farms in the area of ​​today's town of Bergkamen. Worth mentioning is the Gut Haus Velmede , which has been the seat of part of the von Bodelschwingh family since 1636 , from whom two Prussian ministers and pastor Friedrich von Bodelschwingh the Elder , the founder of the health facilities in Bethel near Bielefeld, came from in the 19th century .

At the end of the 19th century the Ruhr mining industry reached the local area. In 1890 the first shaft for what would later become the Zeche Monopol shaft Grimberg 1/2 was sunk. This started the strong population increase in the communities of today's urban area due to the need for workers in the mining industry . The population of the old municipality of Bergkamen increased ninefold between 1890 and 1912.

When the Reich government in Berlin was to be overthrown by a putsch on March 13, 1920 ( Kapp Putsch ), the workers in the Ruhr area went on a general strike and fought armed against the putschists ( Ruhr uprising ). Among other things, in the Battle of Pelkum there were high losses of the Red Ruhr Army. The Bergkamen victims of the fighting near Pelkum as well as members of the Red Ruhr Army who were later shot dead by the Freicorps - a total of six fighters - were buried in today's central cemetery. The sculpture of a woman above her graves symbolizes freedom, for the defense of which the six Bergkamen workers died.

In 1946, Germany's worst mining disaster occurred at the Monopol colliery, Schacht Grimberg 3/4 at a depth of 939 meters. 405 miners were killed.

According to the 2011 census , 19,928 (40.7%) of Bergkamen were Protestant, 13,078 (26.7%) were Roman Catholic and 16,005 (32.7%) were non-denominational or members of other religious communities. When the five Catholic parishes merged in 2011 to form the Bergkamen Pastoral Association, they had around 13,000 members; there are currently around 12,000 Bergkamen Catholics. There are churches of various denominations in the village; The catholic parish church St. Elisabeth , which is located in the center of Bergkamen, is worth seeing .

Catholic parish of the Holy Spirit

The pastoral association Bergkamen was created in 2011 from a merger of the two former pastoral associations Bergkamen-Rünthe and the pastoral association Weddinghofen-Oberaden. On January 1, 2020, the Bergkamen Pastoral Association was renamed the Heilig Geist parish. The other two names available to choose from were the two Saints Saint George and Saint Abraham. The next step that the Catholics would like to take is the merger of the three pastoral associations Bergkamen, Kamen and Bönen into one pastoral space. The parish offices of the parish churches in Oberaden, Weddinghofen and Rünthe have been closed since April 2020. The parish office at the St. Elisabeth Church serves as the central parish office, which is therefore also the main church of the Catholic parish of the Holy Spirit. The Catholic parish holds two masses on Saturdays at 5:00 p.m. (Herz Jesu) and at 6:30 p.m. (Weddinghofen). On Sundays the parish offers services at 10:00 a.m. (Oberaden) and at 11:30 a.m. (center). In addition, church services are offered in the individual retirement homes in Bergkamen. The Catholic parish of the Holy Spirit is currently occupied by three priests, a parish clerk and two deacons. For some time now, the community has had an improved website and is also on Facebook and Twitter. On the YouTube platform, the Heilig Geist congregation broadcasts services for the congregation members and also announces important information there that is of importance for the congregation members.

The Evangelical Church Community is also represented in Bergkamen and currently has 10,000 members. The respective churches are located in the districts of Mitte, Overberge and In Weddinghofen.

It is divided into three parishes:

Election to the city council

The local elections in North Rhine-Westphalia on May 25, 2014 resulted in the following results for the 44 seats of the Bergkamen City Council:

The BergAUF Bergkamen personal electoral alliance is assigned by the protection of the constitution as being closely related to the MLPD .

The mayoral election on May 25, 2014 brought the following result:

Directly elected members of the Landtag and Bundestag

Bergkamen has partnerships with the following cities:

Bergkamen
square of the twin cities at the town hall

The district of Unna maintains a long-term partnership with

In this context, the Bergkamen Adult Education Center has been running appropriate language trips for many years.

The coat of arms of the city of Bergkamen shows six hexagons, alternating between red and silver, on a gold background. The number 6 indicates that the city of Bergkamen was created through the merger of six municipalities (today's districts). The arrangement of the hexagons should symbolize the chemical structural formula for benzene (C 6 H 6 ) =

and thus indicate the industrial basis of the city at that time ( hard coal , coking plants , coal chemistry ).

The used colors gold, red and silver are reminiscent of the former territorial affiliation of today's Bergkamen city area to the county of Mark .

Bergkamen's economy was shaped by mining ( hard coal ) until a few decades ago . However, the mine closings have caused unemployment to skyrocket. There are currently more than 110,000 m² of commercial or mixed-area areas available in the city for the settlement of new commercial enterprises. Over 340,000 m² will be available in the medium to long term.

The town of Bergkamen has the lowest average primary income per inhabitant in the Unna district. In a national comparison, it was ranked 388 among the 396 municipalities of North Rhine-Westphalia in terms of average disposable income in 2016. Thus Bergkamen is one of the lowest income communities in the state.

Work by Bayer Pharmaceuticals and Bergkamen power plant in the background 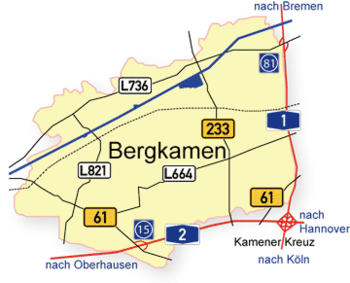 The city of Bergkamen is located on the Kamener Kreuz and is connected to the German trunk road network via two motorways and two federal highways :

The course of the federal (B) and state roads (L) through the Bergkamen city area:

After Herten, Bergkamen is the second largest German city without rail passenger transport. The nearest passenger stations are in the neighboring cities of Kamen , Lünen and Werne . The closest railway hubs are Hamm and Dortmund .

As a result, there are still 8 school bus routes with temporary service:

In Bergkamen there are numerous transfer options between the various bus lines, including the following stops

In Bergkamen there are a few stops that belong to several price zones: (clockwise)

Many people in Bergkamen use the train station in Kamen to reach other destinations by train.

With the following lines of the VKU you can easily get to Kamen train station: S81 R13 R81 D80

The VKU is a member of the Verkehrsgemeinschaft Ruhr-Lippe (VRL). The Westphalian tariff applies . For trips from the municipalities of Lünen, Bergkamen, Kamen, Unna, Holzwickede and Schwerte to the VRR area and vice versa, the tariffs of the Verkehrsverbund Rhein-Ruhr (VRR) apply. Various line network plans can be found on the VKU website.

A large part of the transport services of the VKU, especially in the school bus transport , is provided by subcontractors . The subcontractor Vehling Reisen is based in Bergkamen and also drives for VKU.

The sports boat harbor can be reached with the two express bus lines S20 and S81 at the Marina stop and with the two regional lines R81 and R82 at the Wichernstraße stop.

Almost all types of schools are represented in Bergkamen. Bergkamen also has a youth art school, a music school and an adult education center . The city ​​library only moved into the building on the city market a few years ago.

Bergkamen
earth wall of the Bumannsburg

The Bergkamen buildings listed below are listed:

The city ​​has also made a name for itself in German indoor handball . The men's team of HC TuRa Bergkamen played from 1983 to 1985 in the highest German division.

Bergkamen
during the 2004 light market

Bergkamen owns a large number of works of light art, light sculptures and illuminations.
With the following works it is represented in the culture project Hellweg - a light path .

See: List of works of art in public space in Bergkamen

Bergkamen 2001 View from the south (A2 motorway) onto the districts of Weddinghofen and Mitte (City, Colony Schönhausen and Nordberg). In the background the “Haus Aden” mine in Oberaden, the “Großes Holz” mine dump, the coal-fired power plant in Heil and the headframe of the “Neu Monopol” mine

Cities and communities in the Unna district