The Westphalian city Oer-Erkenschwick [ oːɐ̯- ] is on the northern edge of the Ruhr region in the northwest of the state of North Rhine-Westphalia and is a middle district town of the district of Recklinghausen in the administrative district of Münster .

Oer-Erkenschwick is located northeast of the district town of Recklinghausen and on the southern edge of the Haard , which itself belongs to the Hohe Mark-Westmünsterland Nature Park .

Oer-Erkenschwick is the only municipality in the Recklinghausen district to have no share in the district boundary. 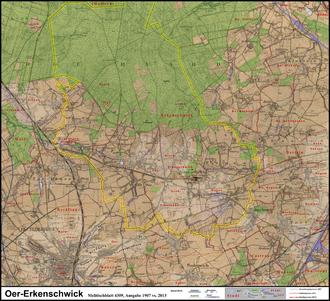 The city is divided into the districts of Honermann-Siedlung in the far west, Oer in the west, Klein-Erkenschwick in the north of the center, Groß-Erkenschwick in the south of the center, Rapen in the east and the large, but hardly populated district of Haard in the north-northwest, the is in the forest hill country of the Haard . The two parts of Erkenschwick together take up less space than the two immediately adjacent outer districts of Oer and Rapen, but individually have more inhabitants than Oer and Rapen. The Honermann-Siedlung district, apart from the eponymous settlement, is mainly used for agriculture, which also applies to the west and south of Oers.

In the Middle Ages, Oer was the seat of a knight family, the Lords of Oer . A moth was unearthed there . The Oberhof Oer with numerous lower courtyards came into the possession of the Archdiocese of Cologne . Since the 12th century Oer was a manorial rule of the cathedral chapter.

In addition to the village of Oer, the parish Oer consisted of the farmers' communities Alt-Oer , Siepen , Sinsen (today mostly part of Marl ) and Erkenschwick (probably only temporarily). At times even in the north, on the Lippe , Hüppelswick ( Sickingmühle ), Herne , Hamm, Bossendorf , Flaesheim and Leven were also included. The populated western part of Sinsen was spun off on April 1, 1926 to the then rapidly growing city of Marl .

While Alt-Oer is just outside the main settlement area of ​​the city, the village of Oer flows eastwards into Klein-Erkenschwick, the border is the Buschstrasse. Further south, the border with Groß-Erkenschwick runs immediately west of the fire station and then along the settlement boundary , then gradually hike to Esseler Straße, which is the eastern border until shortly before the Schultenkrug intersection with Dortmunder Straße (Recklinghausen) or Horneburger Straße .

Groß-Erkenschwick flows eastward into what is now the main settlement area of ​​Rapens, the border is the street An der Aue ; south of Horneburger Strasse the border moves a little to the east and includes the Westfalenring.

Rapen, with the main town of Steinrapen to the east of Klein-Erkenschwick, used to belong to the office and parish of Datteln . With the industrialization, however, the south of the district with the sausage factory Barfuss GmbH , today part of Westfleisch , gradually merged with Groß-Erkenschwick. The Westerbach , later called Dattelner Mühlenbach , has its source in Rapen, not far to the east of the city park . The Steinrapener Bach also flows into it, immediately east of the city limits.

After the province of Westphalia was created in 1815 and the Prussian rural community order for the province of Westphalia from 1841 had been established as an administrative level, the municipality of Oer belonged to the Recklinghausen district from 1844 to 1926; Erkenschwick as a peasantry to the rural community of Recklinghausen. On April 1, 1926, the community Oer-Erkenschwick was formed from parts of the communities Datteln, Oer and Recklinghausen-Land. On March 2, 1953, it received city ​​rights . This makes it one of the youngest cities in the Ruhr area.

The district of Rapen was first mentioned in writing around 1140 in a Werden land register . Oer, which was by far the largest district and the only parish until the beginning of coal mining, is attested in a document from 1144.

The large population growth at the beginning of the 20th century resulted from massive immigration through coal mining. After the local Ewald colliery was closed in 1997, the city's economic focus in 2005 was meat processing. The city became known across the region for the Stimbergpark leisure and adventure pool , for which a new, privatized sports and fun pool called Maritimo was opened in 2004.

The city became known far beyond the Recklinghausen district after the Second World War through one of the leading football clubs in West Germany until the mid-1950s, SpVgg Erkenschwick .

The local election campaign in Oer-Erkenschwick attracted attention in 1999 when it became known that the mayoral candidate and top candidate of the FDP for the city council, Dirk Chittka, had also belonged to the NPD before his membership in the CDU and CSU . The FDP then advised against voting for the FDP in local elections. So he was denied entry into the city council.

There was also a special political event in 2004: Karl-Heinz Rusche, then SPD member of the state parliament, ran for mayoral election against the candidate nominated by the SPD because he had been expelled from the council due to an internal dispute. In the runoff election, the former CDU member of the state parliament Hans-Joachim Quantity (politician) prevailed against Alfred Schlechter (SPD) and was elected mayor of the city of Oer-Erkenschwick. He was the first mayor in Oer-Erkenschwick who is not a member of the SPD.

Oer-Erkenschwick is one of the municipalities that had taken out cash loans in Swiss francs . The city lost a lot of money in the unsuccessful speculation on the development of the Swiss franc exchange rate and the development of the interest rate level in Switzerland. It had to create the “provision for potential losses” of € 34,753,031 as “risk provision for derivative transactions”. In the end, it was even a bit more expensive: the city concluded a settlement for 35.2 million euros with the first resolution agency (EAA) as the legal successor to WestLB . While other municipalities held back with information on their derivatives transactions , the city of Oer-Erkenschwick relied on transparency and published the figures on the amount of foreign currency loans and provisions .

The list only includes parties and voter communities that have received at least 1.95% of the votes in a local election.

In the 2014 local elections, the turnout in Oer-Erkenschwick was 42.8%, the lowest in the Recklinghausen district. (For comparison: the voter turnout nationwide was 50.0%.) 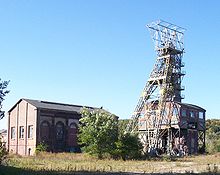 Headframe of the Ewald colliery continued

From 1899 to 1997, hard coal mining and coking was an important branch of the economy . Parts of the former mining facilities of the Ewald colliery can still be seen in the city.

Even years after the decline of the coal and steel industry, which determined the economic development of the city, the city still suffers from high unemployment as a result of this relationship of dependency. In addition to the high-turnover meat and sausage factory Gustoland (formerly Barfuss, today a subsidiary of Westfleisch ), the trade is predominant today. Industry is no longer the defining factor. Rather, the majority of the citizens of Oer-Erkenschwick work outside the city. Oer-Erkenschwick can therefore rightly call itself a residential and leisure city.

There is no railway connection. Until 1957 the Vestische tram connected Oer-Erkenschwick with Datteln, until 1960 with Recklinghausen.

Oer-Erkenschwick does not have its own hospital. The closest hospitals are in Recklinghausen and Datteln.

In addition to four primary schools, the city houses a secondary school (Paul-Gerhardt-Schule), a secondary school (Christoph-Stöver-Realschule), the Willy-Brandt-Gymnasium and a special needs school (formerly Friedrich-Fröbel-Schule, since 2018 part of the Martin- Luther King School in Castrop-Rauxel ). There is a community college for adult education. 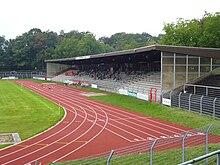 The football club SpVgg Erkenschwick belonged to the top division for almost a decade after the Second World War. Its venue is the Stimberg Stadium . Since the 2017/18 season, SpVgg Erkenschwick has been playing in the Westfalenliga 2 .

by year of birth

Cities in the Recklinghausen district