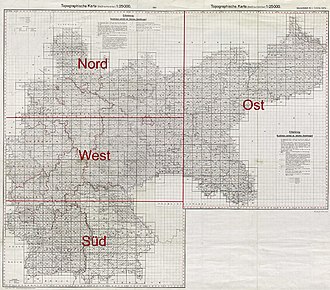 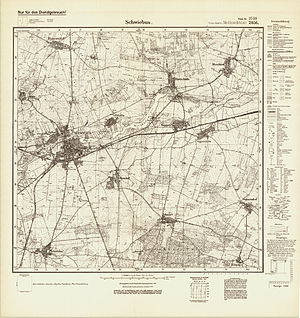 Measuring table sheet , formerly measuring table sheet , is an outdated name in Germany for the topographic map on a scale of 1: 25,000 (today's name: TK 25 ). Here, 4 cm on the map corresponds to 1 km in nature ("four-centimeter map"), which makes this map type particularly popular with hikers - also because of the associated precision.

An original table sheet is a table sheet from the Prussian first recording between 1830 and 1865.

The name is explained by the classic recording process (see: land surveying ) of topographic maps in the area , which was carried out using a measuring table and tilt rule .

TK 25, which is still in use today, was created in the early years of the German Empire , initially in Prussia , Mecklenburg, Oldenburg , the Hanseatic cities and the smaller central German states as part of the Prussian land registration from 1876 to the beginning of the 20th century, followed by Saxony the land survey from 1898 to 1924, Hesse by reworking the elevation levels map of Hessen 1: 25.000 , Baden through revision of the topographic map of Baden 1: 25.000 , Württemberg by generalizing from the height field map 1: 2500 and Bayern by generalizing from the height field map 1: 5000 on Basis of the previously created position control point field .

In the GDR from 1956 to 1969 a new topographic land survey was carried out on a scale of 1: 10,000, the result of which was a topographic map 1: 10,000 . A completely new TK 25 was derived from this by generalization. After the reunification of Germany, the GDR's TK 25 was fitted back into the old TK 25 system from the time of the German Empire.

The maps were originally in black and white in the Prussian processing area. In Saxony, Hesse, Baden, Württemberg and Bavaria, however, the maps appeared in three colors with a black floor plan, brown contour lines and blue waters. The standard today is a four-color edition with additional green forest areas, in the Bavarian Alps also with sculptural terrain shading.

The map sheets are structured as degree division maps, i.e. the maps (the sheet section ) are delimited by whole-numbered meridians and circles of latitude . Each map sheet is 10 minutes wide and 6 minutes high; thus the area in central Germany depicted on a sheet is about 10 by 10 kilometers. For example, the lower left corner point of sheet “6926 Stimpfach” corresponds exactly to 49 ° 0 'north and 10 ° 0' east and the upper right corner point 49 ° 6 'north and 10 ° 10' east. The Bessel ellipsoid was used as the reference ellipsoid for the maps . Therefore, to use the coordinates for modern GPS applications, for example, they must first be transformed into the “ WGS 84 ” coordinate system.

In addition to roads, paths and terrain markings, the maps also contain contour lines (isohypses) and are therefore only designed for the solid surface of the earth, information on water depths and tides are completely missing.

Print resolution of a topographic map

The detail resolution of a 1: 25,000 map is around 12 m, which corresponds to a point spacing on the map of 0.5 mm. At the bottom right of the map section (right picture) the small black bars each symbolize a length of 10 m. The resolution is sufficient to resolve the width of streets.

To ensure easy handling of the measuring table sheets, each map sheet is also given a flat, rectangular coordinate grid at intervals of four centimeters (corresponds to one kilometer), so that only one pair of values ​​from the so-called upper and lower values ​​is required for any given location. This is where the term “four-centimeter card”, which was used earlier, comes from.

This simple map display reaches its limits because firstly the earth's surface is not flat and secondly the meridians (also in Germany) do not run parallel. This leads to overlapping zones in which location information can optionally be given according to the left or right reference meridian.

Originally, the measuring table sheets were numbered consecutively line by line from west to east in the north.

The individual sheets have been designated with four-digit numbers since 1937, whereby the first two digits represent the line of a north-south sequence, the last two digits the column of a west-east sequence; the name of the largest or (historically) most important place in the depicted area can also be used to designate the sheet (example: "4425 Göttingen" is the sheet in the 44th row from the north and the 25th column from the west, with Göttingen as the largest Place; or "5506 Aremberg": 55th row from the north and 6th column from the west, Aremberg was the most important place until 1794). The starting point for the numbering is 56 ° North and 5 ° 50 'East according to the territorial status of the German Empire at that time . The northernmost point was on the Baltic Sea near Nimmersatt in Memelland (East Prussia) and can be found on sheet 0192. 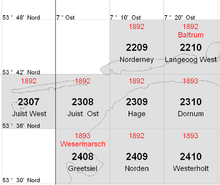 The example shows a section in northwest Germany in East Frisia. The top red number indicates the year of the first issue of the respective map sheet. Below that is the original name of the map sheet (also in red), if it differs from today's name. Next, the current number of the card sheet is given, underneath is the current name of the card sheet.

The historical names of the leaves differ in some cases from today's names, for example today's leaves were called "6323 Tauberbischofsheim-West", "6324 Tauberbischofsheim-Ost" and "6423 Ahorn", formerly "6323 Tauberbischofsheim", "6324 Grünsfeld" and " 6423 Gissigheim ". This can have various reasons: An important place may have expanded into the area of ​​another sheet (e.g. Tauberbischofsheim from sheet No. 6323 to sheet No. 6324) or a new important place was chosen, among other things after in the area of ​​one Blattes in the course of a territorial reform a new municipality was created, on the basis of which the corresponding sheet was renamed in the following (e.g. the municipality of Ahorn through the territorial reform in Baden-Württemberg in sheet no. 6423).

Today the measuring table method has largely been replaced by aerial photogrammetry ; the designation "measuring table sheet" for the TK 25 is anachronistic and is only rarely used.