A map series consists of topographical or thematic maps that are structured and designed according to uniform principles. Map series are created when a map of an area is to be produced which, because of its scale, has to be divided into several sheets. Nonetheless, the individual sheets of a map can also be used independently, as they usually contain complete map information and legends. If a country has several maps of different scales that are coordinated with one another, a series of scales results .

In everyday use, individual maps and atlases are occasionally referred to as “maps”. This is not correct in the technical jargon of cartography , since the term is exclusively reserved for the appearance of a map in several sheets described here. The size of a map series can range from at least two to several tens of thousands of sheets.

Outdated maps of the 19th century are often called topographic atlas , as these small-format sheets were also bound to atlases. An example of such a map series is the Topographical Atlas of the Kingdom of Hanover and the Duchy of Braunschweig .

A map series is not to be confused with a map collection . 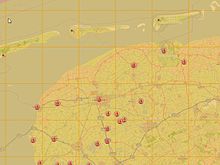 The characteristics of a single sheet of cards in a series of cards apply equally to all other sheets of cards in the series. All sheets of a map series show the same map network design , scale and a uniform content and cartographic design. A set of maps is cut into individual sheets according to a specific system and these are numbered and named according to common principles.

In theory, almost any map network can be used. In practice, variants of the Mercator projection are most widespread today . The UTM coordinate system is often used.

All sheets of a map series have the same structure. They all have the same title of the map, have the same copyright notices, use the same map legend and, with the exception of any marginal pages, are usually printed on paper of the same format. Among other things, the sheet title and sheet number, which locate and identify the specific sheet in the map series, are individual.

The sheets are cut either at right angles according to the map grid or along the meridians and circles of latitude . In the first case, the leaves are all the same size. The second case involves so-called degree division maps, the extent of which decreases in the east-west direction towards the north. Regardless of the type of sheet section chosen, with official topographical maps four map sheets of the larger scale each form a map sheet of the next smaller scale. Irregular sheet sections are used to display special extracts, such as river maps.

In order to determine whether a card is part of a series of cards or not, it is often sufficient to search for a card sheet number. This numbering is usually printed prominently and allows the connection sheets to be identified directly or indirectly with the help of a sheet overview .

The following numbering systems are mainly in use:

Consecutive according to the frequency of publication: The pages are numbered consecutively according to the date of publication. This means that it is not possible to determine the neighboring sheets without a current sheet overview. It is also not possible to state the number of the connection sheet on the edge of the card, as its year of publication (and thus its place in the numbering system) may not yet be known. This system is therefore only suitable for small map series or those with an irregular page cut (as is the case with tourist maps in the private cartographic trade) and is rarely used in modern official map series. Example: Geological Atlas of Switzerland 1: 25,000.

Continuously in rows or columns: The numbering starts at the top left with the westernmost sheet, then rises on the same row towards the right (to the east), from there to the next lower (southern) row, etc. In some countries this system is used not used in rows, but in columns. The disadvantage of both variants is that two of the four connection sheets cannot be directly deduced from the numbering. In order to meet this requirement, the numbers of the connection sheets are given on the edge of the card. Example: Belgique 1: 50,000.

According to zones and columns: This numbering runs line by line from left (west) to right (east). In contrast to the consecutive numbering system, the following lower (southern) line is numbered higher by a certain grade rule (e.g. 20, 100). All sheets of paper standing vertically on top of each other therefore have identical numbers at the end. Such hand numbers often have four digits and, if the grade rule is known, it is easy to find a neighboring hand. Example: National map of Switzerland 1: 25,000.

By latitude and longitude: The leaves are sorted by integer digits from the geographical length and width specifications are formed (the reverse order is not common). With this system, the geographical position of the map sheets can be located directly. In contrast to the previous system, the leaves adjoining each south have lower numbers and the last digit is always the same for the leaves lying next to each other. These numbers are also four-digit, at least in Central Europe. Example: General map of Central Europe 1: 300,000.

According to sub-sections of the International World Map : The sheet numbers of the International World Map 1: 1,000,000 are supplemented by an addition in the next larger scale (e.g. capital letters). The sheet numbers of every other scale also have differentiating additions (e.g. Roman numerals, lowercase letters, etc.). These numbers can become very complex, but also allow “the connoisseur” to at least roughly localize the map sheet on the globe. Example: Soviet General Staff Map 1: 200,000.

The name of a sheet, regardless of the sheet cutting system chosen, is almost always based on the largest town depicted. Since the important French Carte de Cassini 1: 86.400 from the 18th century, almost all sheets of map series around the world are not only numbered, but also individually given a map sheet name. Today there are practically only sheets of very remote areas with a lack of toponyms (e.g. in northern Canada) without their own map sheet names .

It is technically very difficult and in use it would be very impractical to print , for example, the national map of Switzerland 1: 25,000 on a single sheet; the card would be around 9 m high and 14 m wide. Therefore, maps are issued and stored in loose-leaf form. In extreme cases, a map series can contain tens of thousands of sheets. Probably the largest map series ever created is the topographic map 1: 25,000 of the Soviet Union with around 300,000 sheets, completed in 1987.

Occasionally, the buyer also binds smaller maps to an atlas without having the otherwise typical characteristics of an atlas.

Especially as wall decorations, sheets of a map series are glued together with their neighboring sheets. For example, the national map of Switzerland 1: 100,000, which consists of 22 sheets, hangs as a wall decoration in the Federal Palace (Bern) and in the Swiss National Library .

Every state above a certain area has several topographical maps of coordinated scales (scale series). The German basic map (DGK5) and the topographic maps 1: 25,000 (TK25) to 1: 1,000,000 (TK1000) of Germany are representative. In Germany, the federal states and the respective state surveying office are responsible for the production and updating of map series up to and including 1: 100,000 . The small-scale maps are processed by the Federal Agency for Cartography and Geodesy .

Many non-European countries limit themselves to 1: 50,000 as the largest scale out of consideration for the often large national territory (and therefore for financial reasons). A well-known exception is the map series of the USA in 1: 24,000.

Map series that were created through the cooperation of several countries, in particular the International World Map 1: 1,000,000 (IWK) and the World Map 1: 2,500,000 (Karta Mira) , achieved a high level of recognition worldwide . The IWK has been developed since 1913. Although numerous sheets are available, the IWK was never completed. The Karta Mira was created from 1963. It is complete but has not been updated since the 1980s. Both map series also served as the basis for thematic mapping.

The first maps, as yet unpublished, are probably the First Electoral Saxon Land Survey by Matthias Oeder and Balthasar Zimmermann (recorded between 1586 and 1633) and the Swedish Land Survey of Western Pomerania (recorded between 1692 and 1709). The first published and thus style-defining map series is likely to be the Carte de Cassini , which appeared from 1756 and was only finished at the beginning of the 19th century.

The 19th century, especially in the German-speaking area, was the great time of the map series known at that time as the Topographical Atlas . Most of the German states introduced their own mappings, which were not brought into line with each other until late under the leadership of Prussia. The Prussian new recording between 1877 and 1915 was fundamental. The resulting topographical map sheets on a scale of 1: 25,000 were referred to as measuring table sheets due to the recording process. From around 1950 the short description TK25 , based on the scale, was increasingly used. Many of the German federal states now offer their historical map series as reproductions, and some digital editions are also available on CD-ROM or online.

Historical maps are often used by historians, landscape architects, local historians etc. for comparative studies. In contrast to individual maps, map series have the advantage of being available over a larger area in a uniform manner of representation and of having documented map network designs and recording methods.