A map collection is the place where maps are stored , usually in a library , archive , museum , map publishers or authorities. In some cases, however, map collections are combined with graphic sheets, manuscripts and rare prints in a common department; in this case “map collection” is to be understood as the entirety of the cartographic collection. 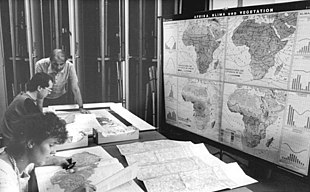 Ferraris map of Brussels between 1771 and 1778, from the map collection of the Royal Library of Belgium

Maps are already mentioned in medieval library inventories. Maps have been collected since the 15th century, be it at royal courts or naval academies in preparation for voyages of discovery, be it with scholars of the Renaissance . New techniques such as copperplate engraving reduced production costs and helped the cards to spread further. Private map collections have often formed the basis for public map collections since the 17th century. For example, the court library in Munich received the Fugger collection and the British Museum that of King George II.

In this context, the geographical societies are also important, which received great influence on the establishment and the collection policy of public map collections or even created collections themselves. Vincenzo Coronelli founded the "Accademia Cosmographica degli Argonauti" in 1680, which existed until 1718. The “Cosmographic Society” was founded in Nuremberg in 1740, while an association of the same name was brought into being in Vienna in 1790. The Société de Géographie de Paris , founded in 1821, was the first modern geographic society. In the 19th century in particular, many map collections were newly established or cartographic materials already existing in libraries were brought together under the responsibility of specialized librarians.

A collection of globes can be viewed as a special case of a map collection .

Newly published maps are recorded in national bibliographies like books . The title, author (s), imprint and ISBN are named. In addition, there are map-specific data such as scale , map projection , geographic coordinates and map format. Most of the scientific map collections nowadays have at least the most important parts of the collection in electronic catalogs and can be consulted online.

Older collections or private collections are often described in bibliophile catalogs. All or at least representative pieces are shown in it. On the one hand, this serves to prove the inventory in the event of theft, on the other hand, the use of Rara can be significantly restricted, since in many cases the illustration and scientific description of the cards is sufficient and the original card is thus spared.

Holdings in archives are often not indexed on a per- sheet basis, but only identified using the finding aids in connection with the files. The archival staff, who are mostly not trained in cartographic matters, are reluctant to describe the type of document that is considered unwieldy and, in a certain way, "foreign", so that, for example, the calculation and mapping of the map scale is mostly omitted. These circumstances make it more difficult to search for maps in archives, but allow persistent researchers to make some “discoveries”.

Challenges for the future

As with books in libraries, map collections are also placing increasing emphasis on providing evidence of digital documents. These include maps and atlases on CD-ROM and DVD and, in some cases, the provision of geodata . Such new forms of publication pose major problems for map collections, as not “only” texts and some integrated images should be stored, but very large amounts of data up to several gigabytes , which might even require expert knowledge to operate the geographic information systems . The long-term storage of cartographic data is also unsolved, which is particularly important for archives.

The digitization of analog map stocks also offers the opportunity to link the library catalogs directly with the images (or at least the so-called thumbnails ). Digitally prepared sheet overviews to provide evidence of the sheet sections of map series also enable more targeted research from one's own workstation.

The largest map collections in Germany include those of the Berlin State Library , the Bavarian State Library in Munich and the Göttingen State and University Library . The collection of the Justus Perthes publishing house in Gotha, which is owned by the Free State of Thuringia, is currently not open to the public .

The undisputed largest map collection in the country is the one in the Austrian National Library in Vienna, to which the world's only public globe museum is affiliated.

The world's largest map collection is in the Library of Congress in Washington, DC with around 4.8 million maps. Other very frequently used and cited collections are in the British Library in London and the Bibliothèque nationale de France in Paris. The authoritative directory World Directory of map collections (2000) names 714 map collections in 121 countries, with map collections in South America, Africa and South Asia being few and far between in Europe and North America and not very endowed.