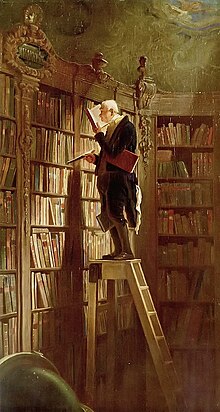 As Bibliophilie (from ancient Greek βιβλίον Biblion "book" and φιλία "Friendship, Love", so "love of books") refers generally to the collection of beautiful, rare or historically valuable books mostly by individuals to build a private library for specific collection criteria. The collector's interest in bibliophiles supports his endeavors to present his collection in one or more suitable rooms and special furniture. The first book on bibliophilia was written in the first half of the 14th century by the bibliophile Richard de Bury , Bishop of Durham , entitled Philobiblon . The first relevant scientific journal Bulletin du Bibliophile has been published in France since 1834. The St.  Wiborada Rekluse of St. Gallen is considered the patron saint of libraries and book lovers , whose name was also borne by a yearbook for book lovers published by Hans Rost from 1933 to 1940 .

In terms such as bibliophile edition or bibliophile book , however, the meaning of collecting takes a back seat to a bibliophile term that aims at the specimen highlighted by special features. However, such bibliophile editions are brought out by the publishers specifically for collectors who appreciate the special character and are willing to pay the higher price for it.

The preference of collectors can still refer to the features of the books. Often high prices are paid for

Signs of use and damage of all kinds (water damage, mouse damage, wormholes, breakage of the book block or the joints, rubbing, bumps and missing parts of the cover, creasing, tears, tears, tears, possibly with loss of text, dog-ears , ink damage , yellowing, tanning, Mold stains , tobacco smoke , mouse urine or cellar smell, soiling, ink and finger stains ) or incompleteness, in particular missing title page or frontispiece , even missing blank pages, missing volumes in multi-volume works, as well as painting or entries or amateur restoration measures by unknown previous owners. Depending on the quality of the selected material, inserts from previous owners, in particular additionally glued or embedded illustrations (truffled copies), can reduce or increase the value.

In addition to the reading and collecting book lover, who is known as the receiving bibliophile, there is also the bibliophile, who drives his love of books so far that he creates books himself and thus becomes a producing bibliophile. The productive bibliophilia, as the performing arts, has its origins in people's attempts to reproduce their reality. Once to preserve them in memory, another time to convey them to others. There are two reasons for this, the second being predominantly social. In order to do justice to this social value, there are also events, such as the Mainz mini press fair in the Gutenberg city ​​of Mainz , at which bibliophiles come together to exchange ideas and present their latest books and prints. In the middle between the two forms are bibliophiles who upgrade their valuable acquisitions by having a bookbinder equip them with an elaborately hand-made binding or by having damaged old bindings professionally restored .

With bibliophiles of all kinds, social aspects can play a major role, for example in exchange with other collectors or by making one's own collection accessible to scholars. This also includes lending books for exhibitions, whereby some bibliophiles attach importance to being named as the owner, while others strictly refuse to do so and want to remain anonymous. A special aspect is the desire to preserve the collection beyond one's own life (and if necessary to make it accessible to a wider public), for example by transferring it to a public library or archive. Collectors with appropriate financial means occasionally set up their own foundation to preserve, maintain and further expand the collection. Bibliophiles have been emphasizing this social aspect since the Renaissance in bookplates with foreign currency such as sibi et amicis (for themselves and friends). Book acquisitions are generally made through second-hand bookshops , autograph dealers and auction houses , all of which also offer specialist advice and with whom bibliophile collectors are often in close, sometimes personal, contact for many years. Other possibilities Antiquarian markets or fairs, book sharing and the steadily increasing in importance Internet trade , on the other hand, the social component largely lacks the one hand, allows you to search for specific books, pads and equipment features in a global deal. Readings by the author or events such as award ceremonies and book fairs offer the opportunity to speak to the author and have copies signed. 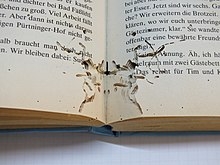 Traces of a "book worm"

Colloquially , bibliophiles are also called bookworms , partly because they sometimes hold the books so close to their face that it looks like they are eating them, just as some rodents eat the inside of books and leave traces in the process. This metaphor was first used in literature in 1747 by Gotthold Ephraim Lessing in his comedy The Young Scholar (3rd act, 1st appearance).

Some bibliophiles increase their passion to a dubious point, for example when they get into financial difficulties because they invest too much money in the purchase of books or when they neglect social contacts in favor of their passion for collecting. Such problematic behavior is known as bibliomania .