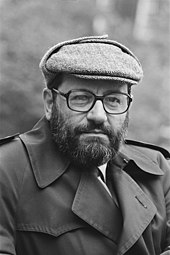 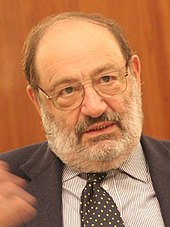 Umberto Eco (born January 5, 1932 in Alessandria , Piedmont ; † February 19, 2016 in Milan , Lombardy ) was an Italian writer , columnist , philosopher , media scholar and one of the most famous semioticists of the second half of the 20th century. He became world famous through his novels, especially The Name of the Rose (originally published in 1980).

Eco spent his childhood and youth as the son of a middle-class family - his father Giulio Eco was an accountant - in the southern Piedmontese provincial capital Alessandria and its surroundings, which had a strong influence on him. About the city and the landscape, the character and the basic mood of the people living there as well as everyday life in the thirties and early forties under the regime of Italian fascism , Eco commented directly or indirectly in several places. B. undisguised autobiographical in the text "The Miracle of San Baudolino" (at the end of the volume How to travel with a salmon ) and in various " Matchstick letters ", but also literarily dressed in the novels Das Foucaultsche Pendel (where, among other things, the time of the Partisan War 1944–1945 with concrete situations from the life of young Eco is told), The Island of the previous day and Baudolino (whose protagonists both come from the Alessandria area, one in the Baroque 17th century and the other in the medieval 12th century , where, among other things, he witnessed the founding of the city in 1168) and particularly in detail in his fifth novel, The Mysterious Flame of Queen Loana , in which Eco's childhood and adolescence are described. The 12 to 13-year-old Eco's experiences in a small mountain village in southern Piedmont, where his family sought protection from the bombings in 1943–1945 and where he witnessed fights between partisans and fascists in the last year of the war, were obviously formative .

In 1948 Eco began - contrary to his father's wishes, who urged him to pursue a career as a lawyer - to study philosophy and literary history at the University of Turin , which he completed in 1954 under Luigi Pareyson with a dissertation on aesthetics under Thomas Aquinas . Then he went to the then still very young Italian television ( RAI ) in Milan, where he tried to set up a cultural program. In 1956 his first book was published, an expanded version of his dissertation under the title Il problema estetico in San Tommaso ("The aesthetic problem with St. Thomas"). Three years later, Eco left television and became a non-fiction editor at the Milanese publisher Bompiani, for which he remained until 1975 (and in which almost all of his books have since appeared). At the same time he was active in the environment of Gruppo 63 , one of the literary movement of the Neoavanguardia group. With the 1962 published book Opera Aperta (German The Open Work , 1973), he was suddenly a brilliant cultural theorist known in 1963 his academic career as a lecturer in aesthetics and visual communication at the Politecnico in Milan began to them via an intermediate station at the University in Florence eventually to finish at the University of Bologna (the oldest university in Europe). His book Introduction to Semiotics , published in 1968 (German 1973), is still considered an international standard work to this day.

Eco received numerous honors and awards, both social and academic, including (until 2014) from 39 universities worldwide the honorary doctorate  - in Germany from the FU Berlin 1998 - and the membership of the order Pour le Mérite for sciences and arts (1999) as well as the Large Cross of Merit with Star of the Order of Merit of the Federal Republic of Germany (2009).

With his first novel The Name of the Rose , published in 1980 (German: 1982), Eco caused a worldwide stir as a novelist, which was completely surprising at the time. His novel Das Foucaultsche Pendel , published in 1988, and the four following novels (1994, 2000, 2004 and 2010, see below) have also been translated into all world languages. The name Umberto Eco is therefore known to a broader audience primarily through these literary works, in which, despite all the joy of colored storytelling and exciting plots, he makes extensive use of quotations and assembly techniques, which has led to their characterization as the postmodern novels par excellence. He himself was rather skeptical about the concept of postmodernism and preferred to speak of intertextuality , i.e. H. of the inner interweaving and interweaving of all literary texts. This idea is expressed very vividly at a central point in The Name of the Rose , where the narrator Adson says:

“Until now I had always thought that the books only talked about the human or divine things that are outside the books. Now it suddenly occurred to me that the books often speak of other books, yes, that it is sometimes as if they were talking to one another. And in the light of this new insight, the library seemed even more sinister. Was it the place of a long and secular whisper, an inaudible dialogue between parchment and parchment? So something living, a space full of forces that cannot be tamed by any human spirit, a treasure house full of secrets that have sprung from countless brains and live on after the death of their creators? Or let this persist in you? "

Eco named Jorge Luis Borges and James Joyce as the two modern writers "whom I have loved most and who have influenced me the most". 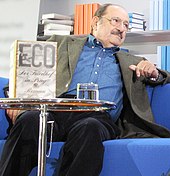 Eco at the Frankfurt Book Fair 2011

As a citizen and political author, Eco was also an active and vehement opponent of Silvio Berlusconi . In numerous newspaper and magazine articles he sharply criticized its policy. Shortly before the election in April 2006, which Berlusconi then narrowly lost, Eco published his collected political writings again in book form under the title Im Krebsgangvors: Heiße Kriege und medialer Populismus (German: Spring 2007).

Since 1985 he has written regularly - first weekly, from 1998 biweekly - a column in the weekly magazine L'Espresso under the title La Bustina di Minerva (German: " Match letters "). He was the co-founder and editor of the Internet magazine Golem l'Indispensabile . In 2002, together with friends and like-minded people (including the architect Gae Aulenti and the writer and Germanist Claudio Magris ), he founded the group Libertà e Giustizia , which - based on the resistance movement Giustizia e Libertà against Mussolini fascism - acts as an intellectual opposition to the Silvio Berlusconi understands politics.

In 2005 Umberto Eco was voted the second most important intellectual in the world in the English magazine Prospect after Noam Chomsky and before Richard Dawkins . In April 2010 the first biography (life and work) appeared about him.

After Eco had already devoted himself extensively to the subject of conspiracy theories in the novel The Foucault Pendulum , this is also the central theme in the novel The Cemetery in Prague , published in 2010 . Eco creates a professional forger with his fictional first-person narrator Simon Simonini, whom he introduces as the main author of the Protocols of the Elders of Zion .

From 1962 until his death, Eco was married to the native German Renate Ramge , an expert in museum and art didactics born in Frankfurt am Main . They had a son and a daughter.

Umberto Eco died in the late evening of February 19, 2016 at the age of 84 in his Milan apartment of complications from cancer.

“If you don't read, you'll only have one life by the age of 70: your own. Anyone who reads will have lived 5000 years: he was there when Cain killed Abel, when Renzo married Lucia , when Leopardi admired infinity. Because reading is an immortality to the rear. "

All illustrated by Eugenio Carmi

Cultural and other works