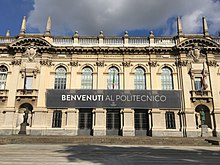 Facade of the main building of the Polytechnic

It was founded in 1863 by scholars and influential industrial families in Milan as the “Istituto Tecnico Superiore”. The founding rector was the mathematician Francesco Brioschi ; other well-known professors Luigi Cremona and Giulio Natta , Nobel Prize Winners for Chemistry 1963.

The Politecnico, which was given its current name in 1937, is considered one of the leading European universities of engineering , architecture and design .

The university consists of 17 departments and a network of nine "schools" in seven campuses, spread over the regions of Lombardia and Emilia-Romagna :

Currently around 43,000 students are being looked after by around 1,400 professors and lecturers. The rector is Ferruccio Resta .

The MIP Politecnico di Milano Business School is a consortium made up of the Politecnico University and numerous industrial and institutional partners. MIP offers 13 training programs, 8 of which are masters programs.

The following degrees are offered at the 6 engineering schools and 3 architecture schools:

To promote particularly talented students, the Milan Polytechnic together with the Turin Polytechnic founded the Alta Scuola Politecnica in 2004, based in Milan and Turin.