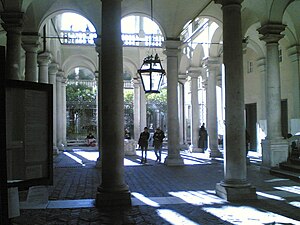 Giovanni Battista Moroni - The orator Giovan Pietro Maffeis (1533–1603), professor of rhetoric at the University of Genoa

The University of Genoa ( Italian : Università degli Studi di Genova ; Latin : Genuense Athenaeum ) is a state university in the northern Italian port city of Genoa with a total of around 37,000 students and around 1,600 academic employees. The University of Genoa was founded by papal bull by Pope Sixtus IV in 1471 and today has faculties both in Genoa and along the Ligurian coast in Imperia , Savona and La Spezia .

In the evaluation of Italian universities, the University of Genoa came fifth at the national level (out of a total of 65 public universities). The Italian counterpart to the German Excellence Initiative provides a financial bonus of around 4.5 million euros for the university.

As early as the 13th century, there were academies in Genoa that offered degrees in law, theology, medicine and art. The Academy of Theology was officially recognized in 1471 by means of a bull by the then Pope Sixtus IV. A few years later, in 1481, the Council of Elders published the Statute of the Medical Academy.

In 1569 the Senate of the Republic of Genoa transferred the administration of the individual academies to the local Jesuit order . This was currently located near the old San Girolamo Del Rosso church and was in the process of expanding its lands, from which the academies now affiliated benefited. The current main building of the university was built under the direction of the architect Bartolomeo Bianco , and began operating in 1640.

After the Jesuit ban in 1773, a separate committee dealt with the reorganization of the universities. The various courses were divided into higher education ( canon law , philosophy, civil law , theology, logic and metaphysics and physics) and elementary education ( rhetoric , reading and writing).

During the French occupation under Napoleon Bonaparte , higher education was further subdivided into technical schools. Dedicated faculties for law, medicine, physics and mathematical sciences, commerce, languages ​​and literature as well as chemistry were created. The university itself was attached to the Imperial University of Paris . It only became independent again in 1812.

The first technical institutes were opened in 1870: the Royal Naval School and the Royal Commercial School , which were incorporated into the University of Genoa in 1936 as the Faculty of Engineering and the Faculty of Economics.

The college expanded rapidly in the late 20th century. New regional campuses were created . In 1996, some of the institutes moved to a restored army barracks in Savona. The campus there includes the specialist department for engineering and economics and expanded with laboratories for simulation, logistics and industrial engineering.

In January 2001 an “Institutional Review of the University of Genoa” was published by the European Rectors' Conference (CRE). This justifies the promotion of external professorships and an international student body.

The university is divided into 11 faculties.