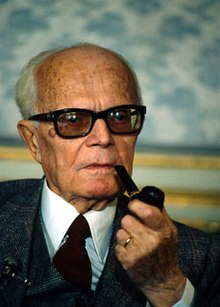 Alessandro "Sandro" Pertini (born September 25, 1896 in Stella , Province of Savona ; † February 24, 1990 in Rome ) was an Italian politician , from July 8, 1978 to June 23, 1985 the seventh Italian president and probably together with Carlo Azeglio Ciampi the most popular president in post-war Italian history.

As the son of the wealthy Piedmontese landowner Alberto, Sandro began his education at a Salesian boarding school in Varazze and then attended the Chiabrera high school in Savona .

His philosophy teacher was Adelchi Baratono , a socialist reformer and employee of Filippo Turati's newspaper Critica Sociale , who introduced Pertini to the circles of the Ligurian labor movement . Pertini studied social sciences and law and passed his exams at the University of Genoa .

In 1915 Pertini was drafted, took part in the First World War on the Isonzo Front as a lieutenant and received several awards for courage and bravery. In 1918 he joined the Partito Socialista Italiano (PSI). He moved to his brother in Florence , where he studied political science at the Institut Cesare Alfieri and received his diploma in 1924 with a writing entitled La Cooperazione (Cooperation).

During his studies he came into contact with democratic interventionists such as Gaetano Salvemini , the brothers Rosselli and Ernesto Rossi . Together with them, he was beaten several times by fascist commandos, but never lost his political ideals. He first joined the opposition movement Italia libera ("Free Italy").

After the assassination attempt on Giacomo Matteotti in Rome , he became increasingly involved in the fight against fascism. In 1925 he was arrested as the author of a brochure entitled “Sotto il barbaro dominio fascista” (“Under the barbaric fascist rule”), in which the monarchy and the royal Italian senate were distrusted because, for example, the senate opposed a General Emilio De Bonos was charged with participating in Matteotti's assassination. In 1926 he was sentenced to five years of deportation as part of the "special laws against anti-fascism" , but was able to hide in Carlo Rosselli's Milan apartment , where he met Filippo Turati , the real head of Italian socialism. Pertini organized his escape to Corsica, accompanied him there and stayed in France until 1929. He worked there as a taxi driver, unskilled worker, house painter, bricklayer and extras . After returning to Italy with a forged Swiss passport, he tried to set up an underground socialist organization, but was betrayed, arrested in Pisa in 1929 and sentenced to ten years and nine months in prison. Pertini remained unbroken and acknowledged the verdict with the cry " Long live socialism " and " Down with fascism ", which earned him temporary imprisonment in the "Regina Coeli" prison and a life sentence in the Santo Stefano prison . Several serious illnesses resulted in his temporary release in December 1930 to a home for the chronically ill in Turi . There he met Antonio Gramsci, another legendary figure of Italian socialism , with whom he befriended and whose diaries he was finally able to save. In April 1932, because of his health, he was transferred to a sanatorium for prisoners in Pianosa . When his mother was told about his health for a pardon, he made it clear that he did not want pardons. In 1935 he was exiled to Ponza , in 1939 in Tremiti and later on the island of Ventotene in the Tyrrhenian Sea , where he remained until 1943. One month after Mussolini's arrest, Pertini was freed and immediately threw himself into the fight against the new Mussolini regime and the German occupiers. He was one of the founders of the resurrected PSU and took over the organization of the military resistance there.

After he and Giuseppe Saragat were arrested by the SS in Rome and brutally interrogated without betraying anyone, he was sentenced to death. He was released in a raid by Resistance and became a representative of the PSU on the Central Military Committee of the Committee for National Liberation. As a leading member of the PSU, Pertini went north to organize the resistance of the Resistancea together with the CLNAI . In July 1944 he took part in the liberation of Rome, then turned again to the north , coming from France via Mont Blanc to northern Italy, where in April 1945 he organized the uprising in Milan together with Luigi Longo and Leo Valiani . Pertini's youngest brother Eugenio died in Flossenbürg concentration camp in April 1945 . According to one source, he died on April 25, two days after the camp was liberated, presumably of complications from typhoid fever; according to other sources, he was shot dead on April 20 when he collapsed while being set up on a death march .

After the liberation of Italy on April 25, 1945, Pertini was briefly party secretary of the PSU. In June 1946 he was in the Constituent Assembly voted that the Constitution of the Italian Republic worked out. Pertini was a senator from 1948 to 1953 and was a member of the Chamber of Deputies from 1953 . From July 5, 1968 to June 4, 1976 he was President of the Chamber of Deputies .

During the post-war period he was in the party presidium of the PSU and PSI . From 1950 to 1952, Pertini was editor-in-chief of the socialist newspaper Avanti! In spite of his fundamental readiness for political cooperation with the PCI , Pertini was always concerned about the independence of his party, which he wanted to see as the guardian of democracy and freedom of the working class . Like the majority of the Italian left, Pertini saw the Soviet Union as a protective power against fascism and National Socialism and advocated détente during the Cold War .

After the Hungarian uprising was put down by Soviet troops in November 1956, Pertini clearly sided with Hungary, invoking the right of peoples to self-determination , the sovereignty of states and democratic legality . He opposed any kind of colonialism - both in the open French variant in Indochina and in the disguised variant of Italy in Somalia . He condemned corruption both in the Italian state and in his party and took an independent position in it, which earned him a high reputation across party lines. At the same time he advocated the unity of his party through the diversity of the various wings. He was one of the staunch advocates of a nuclear weapon ban in Italy.

From 1963 Pertini was Deputy President, in 1968 he became President of the Camera dei Deputati (Chamber of Deputies, one of the two chambers of the Italian Parliament) and was elected President of the Italian Republic, Italy's highest state office, in 1978 after 16 ballots at the age of 81. As president, he successfully endeavored to restore the Italians' confidence in the Italian state and its institutions. During the Brigate Rosse's period of terrorism , he was a staunch defender of the rule of law institutions and openly addressed the alleged connection between the Red Brigades and the USSR. He took office shortly after the murder of the Democrazia Cristiana party leader , Aldo Moro , by the Red Brigades and was able to prevent the “parties of the constitutional arc” (DC, PCI , PLI , PRI , PSDI and PSI ) from breaking up in the so-called parliamentary not prevent programmatic majority. On several occasions Pertini refused to take the route of new elections, which was so popular in post-war Italy for tactical reasons, and thus forced the Italian parties to seek compromises.

Pertini took a firm stand against the Mafia , which brutally murdered a number of prosecutors and judges during his tenure. He condemned apartheid in South Africa , the military dictatorships in South America and the intervention of the USSR in Afghanistan . His death left a deep void in many Italians because he was loved throughout the population for his righteousness, integrity, and for his way of speaking up moral and political questions.

Pertini refused to run for a second term and was automatically promoted to life senator after the end of his presidency.

In December 1988, Sandro Pertini was the first person to receive the newly created Otto Hahn Peace Medal in Gold from the German Society for the United Nations (DGVN) in Berlin, "for outstanding services to peace and international understanding, in particular for his political morality and practiced humanity" , awarded.

He was listed in the 1983 Guinness Book of Records as the oldest incumbent president in the world. His reaction to the third Italian goal at the final of the 1982 World Cup between Italy and Germany, when he stretched his finger in the direction of the German delegation or the Spanish king, which gave the impression that he wanted to say: “ Nobody can do us now, remains unforgettable still defeat . "

Pertini was married to Carla Voltolina, whom he had met in 1945 while working with the Resistancea partisans .

In 1983 Toto Cutugno set a monument to Sandro Pertini in the song “L'italiano”. Here he mentions “un partigiano come presidente”. Luca Barbarossa mentions his “victory dance” at the final of the 1982 World Cup in Spain in his song “Le cose da salvare”.

President of the Republic of Italy

President of the Chamber of Deputies of the Republic of Italy