The title of this article is ambiguous. Further meanings are listed under Partisan (disambiguation) .

A partisan ( Italian partigiano "partisan") is an armed fighter who does not belong to the regular armed forces of a state .

Partisans conduct combat operations in an area in which another regular force (army or police of their own or a foreign state or civil administration) officially asserts the claim to power. Partisans mostly fight only within their own national territory, but not always regionally, as was the case in the Spanish War of Independence from 1808 to 1812 with the emergence of the guerrillas , in the Russian campaign in 1812 , in the Spanish Civil War , in the German-Soviet War , with the Titopartisans or with Mao Zedong showed. Partisans exist both in civil wars and internal conflicts and as part of a resistance movement against conquerors, occupiers or colonialists . Already in 1785 Johann von Ewald published his treatise on the little war in Kassel , which was based on his experiences with the insurgents in the North American colonies.

Partisans are generally armed only with light weapons. Their fighting methods include sabotage , espionage , attacks on smaller military units of the enemy and combating collaborators . They mostly operate from the cover of a civilian population , tie up regular troops and are difficult to get hold of, especially due to their often precise knowledge of the location and the possibility of being immersed in the population.

From a military point of view, the terms partisan and guerrilla are often used synonymously. The resistance fighters in the European countries occupied by the Axis powers during World War II are usually referred to as partisans, while the liberation fighters of anti-colonial movements are usually called guerrillas.

International law does not have a legal status of its own for the partisan . According to the Hague Land Warfare Regulations , four minimum criteria applied in order to establish the status as a combatant and thus, on the one hand, to be entitled to acts of war and, on the other hand, to enjoy the status of a prisoner of war in the event of capture :

In the two additional protocols of June 8, 1977 to the Geneva Conventions of 1949, these requirements were changed so that the open carrying of weapons alone during military deployment and attack is sufficient to qualify as a combatant.

People who do not meet the criteria mentioned but still take part in combat operations still enjoy the protection laid down in Protocol I, Art. 75, for example against willful homicide, torture or the like. However, they are responsible for the crimes they have committed according to the laws applicable at the time of the offense. It is necessary to catch the person in the act: a partisan who has violated the above criteria but only falls into the hands of the enemy after a successful act does not lose his status ( risky warfare ).

The Hague Land Warfare Regulations (LKO) of 1907, based on the Franc-tireurs (French militants in the Franco-German War of 1870/71 ), sought a compromise: as a condition for the improvised warrior with an improvised uniform to be recognized as a combatant in the sense of international law the LKO requires responsible superiors, a widely visible badge and open carrying of weapons.

The LKO of 1907 was continued after the Second World War through the four Geneva Conventions (August 12) of 1949. Also some facets of the partisan have now been put on an equal footing with the regular fighters and have their rights. If one of the two parties acts against this prohibition of attack as defined in martial law, the right to self-defense takes its place according to the usual view. If soldiers are attacked by non-combatants, they are allowed to strike back with the weapons available to them - possibly to the detriment of civilians who are not involved ( collateral damage ).

In some states, such as the Netherlands or Belgium , there is the view that in the event of a war of aggression , since this is contrary to international law, there is an obligation to resist illegal occupation . Accordingly, members of the resistance movement should be treated as combatants if they meet the relevant criteria. The shooting of members of the Belgian Armée Secrète or the Dutch Inland Sea Strijdkrachten was therefore rated as murder, as was that of members of the Forces françaises de l'intérieur who fought on the side of the Allies during the liberation of France (Bauer case; Rauter case ).

In the defense doctrine of the Red Army , partisan struggle was firmly planned until the mid-1930s. In the Yugoslav army, guerrilla warfare became the main strategy after 1945 , and the French Resistance also saw the fight against collaborators as their task. In Italy ( Resistancea ) and in Greece ( Andartis , ELAS , DSE ) partisans also played a decisive role in the resistance against the German occupation and in the Greek civil war .

Feldgendarmerie in a Soviet partisan area 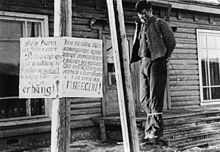 Units of the SS , the Wehrmacht and the Ordnungspolizei carried out numerous massacres of the civilian population while fighting actual or supposed partisans. The partisan war in the Soviet Union cost around half a million lives and is one of the Wehrmacht's greatest crimes . The basis for the action against the Soviet partisans was created by the Barbarossa martial law decree, which was issued by OKW on May 14, 1941 and signed by Field Marshal Wilhelm Keitel . It stipulated irregulars "to the destruction of the aggressor down carry on all other attacks by enemy civilians [...] on the spot with extreme measures" "by the troops in battle or on the run relentlessly to do", too. Before the court martial was issued, German regulations and laws against irregulars provided for court martial. This decree now made it possible to wage a war of annihilation contrary to international law under the pretext of fighting partisans ( formerly known as gang fighting ) . He replaced the conventional military justice against the civilian population with “immediate self-help” in the form of vigilante justice for the troops. At the same time, this decree promised the German soldiers impunity for crimes that were committed in the context of the attack on the Soviet Union. However, because of their ties to the Soviet Union, the partisans themselves advocated a similar approach, which should not be ignored in the historical context (see Stalinist Purge ).

That the fight against partisans was seen as a welcome pretext for the policy of extermination as early as 1941 is shown by the following statement by Hitler from a secret meeting with leading Nazi figures:

“The Russians have now given an order for partisan war behind our front. This partisan war also has its advantage: it gives us the opportunity to exterminate whatever is against us. " 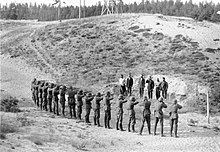 German soldiers shoot men known as partisans in the Soviet Union in September 1941 (admission by a propaganda company ).

Against this background, Jews in particular were subsequently murdered as "partisans". On July 8, 1941, Heinrich Himmler stated in a meeting with SS and police officers in Białystok that “basically every Jew should be regarded as a partisan”.

From 1942, the resistance of the Soviet partisan army behind the German lines increasingly became a serious threat to the Wehrmacht, as it had not been considered in the planning before the war and was long underestimated. The fight between the Wehrmacht and partisans was fought from 1942 on both sides with relentless severity and criminal acts against the enemy and the civilian population. The Wehrmacht often exceeded the already relatively wide scope of legal partisan combat in an excessive and thus criminal manner. Not only actual partisans, but also alleged “partisan helpers” and “partisan suspects” were killed indiscriminately, often without any investigation or evidence.

The fight against partisans increasingly affected people, localities and population groups unrelated to partisan activity. The Jewish population was generally equated with “the partisan” or classified as its helpers and murdered. It should also be noted that despite Stalin's call for partisan struggle of July 3, 1941, the same did not gain momentum for a long time and the Red Army soldiers in the rear of the army were mostly unorganized soldiers who often only hid out of fear of the Germans. With regard to the "fight against" these people, Hannes Heer even speaks of a "partisan fight without partisans" for the period 1941 to 1942. Overall, the number of people who were murdered while fighting the German partisans is estimated at 345,000. A little more than 10 percent of them are supposed to have actually been partisans. 142,000 people, including 14,000 Jews, were killed in 55 major actions alone.

The High Command of the Wehrmacht was on May 6, 1944, the leaflet 69/2 band fighting out the u. a. by the operations departments of the General Staffs of the Army and the Air Force, the Departments of Foreign Armies East and Foreign Armies West , the Abwehr and, presumably, the Waffen SS . Due to the changed war situation, this manual was hardly used anymore, but played an important role in the discourse on strategy and tactics in guerrilla warfare in the early days of the Cold War . It was in 1956 in the move out of the British officers C. Aubrey Dixon and Otto Heilbrunn in their work Partisans. Strategy and tactics of guerrilla warfare published as an appendix. In 2016, the former chief historian of the United States Marine Corps , Charles D. Melson, edited the leaflet in full in English translation under the title Fighting the guerilla bands .

At the time of the offense, retaliatory actions were viewed as permitted under customary law, taking into account international martial law, even with a “reprisal rate” of ten to one.

According to the refined opinion of the Federal Court of Justice , the shooting of a large number of defenseless persons who are not directly involved in the events to be punished with a “retaliatory action” without any kind of condemnation is to be classified as so inhumane that it can only be assessed as unlawful. The appeal to an excuse order emergency under Section 47 of the Military Criminal Code (MStGB) is out of the question in the case of an obviously criminal order if the accused positively recognized the obviously criminal character of the order given to him. A conviction for murder, however, also presupposes the establishment of the subjective prerequisites for a characteristic of murder such as cruelty or low motives.