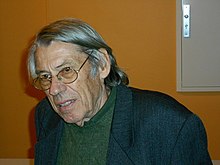 He became known in particular as one of the content formative scientific designer of the Wehrmacht exhibition (original title: ". Annihilation war crimes of the Wehrmacht 1941-1944"), which as a traveling exhibition from the mid-1990s for the first time the war crimes of the regular German forces during the Second World War also documented for the general public. Heer thus made a significant contribution - against resistance from especially right-wing extremist and historical revisionist circles - to spreading the refutation of the myth of the supposedly " clean Wehrmacht " , which has already been proven in the historical field , in the consciousness of the German population.

For this achievement, Hannes Heer was awarded the Carl von Ossietzky Medal in 1997 on behalf of the organization team of the exhibition .

Since the 1960s, Heer has been involved in the student movement and in the political left . In January 1965 he was elected to the student parliament and the AStA in Bonn . A year later he was one of the re-founders of the local Socialist German Student Union (SDS). Because of his work in the SDS, he was not admitted to school as a trainee lawyer in 1968. In 1969 he was a member of the SDS-dominated board of the Association of German Student Unions (VDS) for one term and was close to communist organizations.

Work in science, theater and film

His professional career includes positions in academic institutions, in the cultural sector and in the media. 1975–79 he was a lecturer and research assistant at the University of Bremen . He worked as a radio author and from 1980 to 1985 as a dramaturge and director at the Deutsches Schauspielhaus in Hamburg and at the Cologne city theaters . In 1980/81 he staged the play “When I was nine years old, the war came” in Hamburg, which thematizes the experiences of children during the National Socialist era . In 1995, with the “Minsk Trial”, he staged another piece about the war and how it was dealt with in the post-war period.

From 1985 to 1992 he made documentaries for ARD and ZDF . During this time, more than 20 documentaries were made, including directorial work about Joseph Beuys , the mayor of Aachen, Franz Oppenhoff, who was murdered in 1945 by a werewolf squad, and “Mein 68”, a personal examination of the 68 movement and one's own family history.

Head of the "Wehrmacht Exhibition"

During a planned film project about the SS task forces in Belarus , Heer came into contact with Jan Philipp Reemtsma , the founder of the Hamburg Institute for Social Research (HIS). From 1993 to 2000 Heer was a research associate at HIS. There he was responsible for the first Wehrmacht exhibition , which made him known to a wider public. The project with the title “ War of Extermination . Crimes of the Wehrmacht 1941 to 1944 ”could be seen in 34 cities from 1995 to 1999 and attracted around 900,000 visitors. It dealt with the "legend of the clean Wehrmacht " , which has been popular since the post-war period, and showed the active participation of military personnel in the Holocaust , in crimes against the civilian population and the murder of prisoners of war. The exhibition, which was controversially discussed at the time, caused a sensation in public and was fiercely opposed , especially by right-wing extremists , but also by bourgeois-conservative circles.

But professional criticism was also voiced: Historians found some errors in the assignment of photographs, which is why the HIS had the exhibition examined by a historians' commission. The commission clearly confirmed its basic theses, certified that the team had serious source work and refuted the allegation of falsifications. But she also criticized a careless handling of photographic sources, which the Wehrmacht exhibition had in common with historical studies and current archive practice, as well as a generalized presentation. She therefore recommended a revision. Hannes Heer was no longer involved in this because he and Jan Philipp Reemtsma could not agree on a concept for the new version.

Since leaving HIS, Heer has worked as a freelance writer, editor, director and exhibition organizer.

His main topics are the politics of remembrance and the construction of history, in particular dealing with the Nazi era . In the works “Vom Verschorben der Täter” (2004) and “ Hitler war's” (2005) he examined the tendency to present the history of National Socialism as a story of “acts without perpetrators”.

In 2004/05, together with Petra Bopp and Peter Schmidt, he realized the exhibition “Four times life. Jewish fate in Blankenese ”. The project presented four citizens of Blankenese who had escaped deportation through suicide .

A current focus of his work is research into anti-Semitism in music. Starting in 2006, Hannes Heer investigated the expulsion and persecution of artistic and technical personnel in the Third Reich for racial and political reasons as part of the exhibition project “ Silent Voices ” using the opera houses in Hamburg , Berlin , Stuttgart , Darmstadt and Dresden . He also reconstructed the history of the defamation and marginalization of Jewish artists at the Bayreuth Festival from 1876 ​​to 1945 and recalled the fate of 51 persecuted people after 1933. Twelve of them were murdered. The exhibition has been on view on the Green Hill in Bayreuth since 2012 .

In 1997 Hannes Heer received the Carl von Ossietzky Medal for the team in the exhibition “War of Extermination. Crimes of the Wehrmacht 1941 to 1944 ”.