The University of Bremen (short Uni Bremen ) is the founding year 1971, a recent state universities in Germany and with about 19,200 students and about 2,300 scientists, the largest university in the country Bremen .

From 2012 to 2017, the university was one of the eleven German universities to receive awards in the third round of the Excellence Initiative in the highly endowed “Future Concept” funding line.

The campus of the University of Bremen from above

The glass hall of the University of Bremen, along with the Bremen drop tower, is a landmark of the campus and is used, among other things, for student gatherings.

The tradition can be traced back to the Bremen Latin School, which was renamed the Gymnasium Academicum in 1584 . In 1610 it was converted to the Illustre grammar school , a university with the four classical faculties of theology, law, medicine and philosophy. This college existed until 1810 and was dissolved by Napoleon I. Instead, under the Napoleonic rule, a Franco-Bremen university was considered. After the end of the Second World War , the establishment of an International University in Bremen was discussed in 1948 .

The general planning for the construction of the university has been carried out since 1966 by the University Building Authority Bremen (UBA) under the direction of Otto Freese . The overall planning, urban planning ideas were achieved through a national competition. In the marshland area, around 5 meters of marshland had to be replaced with sand; the university lake and the "university wilderness" were created. Since from 1969 the federal government under Willy Brandt (SPD) with Science Minister Hans Leussink (non-party) promoted the expansion of five universities, including Bremen, to a special degree and under time constraints, the first buildings - humanities (GW 1) and natural sciences (NW 1) - can even be built outside the later center of the university. This was followed by the first buildings in the central area with the University Library Bremen (UB), the central area (ZB), the cafeteria, GW 2, NW 2, the central multi-purpose high-rise (MZH) and then the sports buildings in the east.

Studies at today's university began in the winter semester 1971/72 in the GW 1 building complex. The founding phase in the 1960s was very controversial and led, among other things, to the termination of the Bremen coalition between the SPD and FDP . It was also accompanied by a building land scandal. The foundation stone was laid on November 11, 1968 by students and schoolchildren jokingly under the name "Marx- & Moritz-Universität" - the latter after the name of the then Senator for Education Moritz Thape . In 1971/1973 the Bremen University of Education was integrated. A university was planned with the classic subjects of law, medicine and natural sciences, but with interdisciplinary learning, the so-called project study . The traditional term faculty has been replaced by the term department. The teacher training and law courses were designed in one phase, i. This means that graduates after the first state examination did not go to work, but stayed at the university and were prepared for the second state examination through appropriate practical parts. The single-phase courses did not prevail in the long run, as some of the Bremen graduates had difficulties applying in other federal states. The medical department was not established.

Entrance to the cafeteria, which opened in 2000

The following important information is missing from this article or section:
Years 1973-1997
Help Wikipedia by researching and pasting it .

In June 1997 the cafeteria was completely destroyed by fire. Two children had played with fire accelerators left behind by craftsmen on the roof and started a fire in the process. The rebuilding of the cafeteria cost 36 million D-Marks and it opened in March 2000.

Third parity was introduced in the self-administration of the university, equal rights for the status groups of teachers , students and so-called service providers . The lawsuit of some professors eventually ended third parity.

Some components of the so-called Bremen model have been preserved to this day. The teaching is oriented towards research-based learning, interdisciplinarity, practical orientation and responsibility towards society. This model continues to exist in computer science in particular , in which a significant part of the main course is completed in a student project ( project study ).

The original Bremen model as well as tendencies in the appointment of some university lecturers brought the University of Bremen the reputation of a red cadre forge . Many university professors introduced the theory of historical materialism developed by Karl Marx , and some of them were active in Marxist groups. This included the external presentations (demonstrations) in downtown Bremen on the committee days on Wednesday mornings (nominally no events) . Physicist Jens Scheer was one of the best-known professors from the early days of the company .

Overall, the University of Bremen has three institutions of excellence that have been or will be funded by the excellence initiative of the federal and state governments.

In the first round of the Excellence Initiative, the Graduate School Global Change in the Marine Realm received funding approval.

In the course of the second round of the Excellence Initiative, the applications from the Graduate School Bremen International Graduate School of Social Sciences , a project in cooperation with Jacobs University , and the Excellence Cluster Marum - The Ocean in the Earth System were also successful. This was announced by the German Research Foundation and the Science Council on October 19, 2007 in Bonn.

In the third and so far last round, BIGSSS and Marum defended their status. The marine science graduate school had not started again as this program is now part of the Marum. In addition, the University of Bremen with its ambitious and agile future concept also asserted itself in the third, highest funding line, and is one of the eleven German universities that have been awarded this status.

The university is divided into twelve departments (faculties):

The range of courses is supplemented by virtual lectures, so-called e-learning modules . Interdisciplinary content is conveyed in learning videos and then tested.

The university administration has an equal opportunities department. The university successfully participated in the federal program for women professors in both rounds . 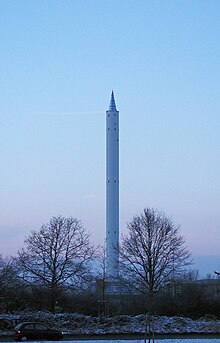 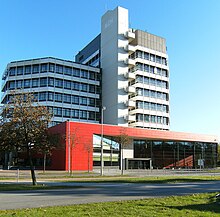 Central multi-purpose high-rise (MZH) at the University of Bremen

With the profiling of interdisciplinary scientific focal points , the University of Bremen has three ongoing DFG- funded Collaborative Research Centers (SFB) and is involved in two other SFBs.

The Oceans in the Earth System - MARUM, the Cluster of Excellence, developed in 2007 from the DFG Research Center Ocean Margins , founded in 2001 .

In May 2017, the university has four Collaborative Research Centers (SFB):

The University of Bremen is also involved in the following special research areas:

Many institutes and research facilities are located in the campus area that either belong to the university or are in close cooperation with it. The larger institutions include:

The State and University Library Bremen (SuUB) is the scientific library of the state and the University of Bremen. As a state library and university library, it provides scientific and regionally related literature to users and institutions from the state of Bremen and the Lower Weser region.

In addition to the main building on campus, there are nine other decentralized locations:

In 2016, the total budget was around 326 million euros. Around 110 million euros of this came from third-party funds .

The state government's austerity measures and the growing number of students have worsened the university's financial situation. One consequence of the financial problems was the discussion on the introduction of tuition fees since the end of 2002. An administration fee of € 50 per semester was introduced in 2004. A university master plan was discussed by Bremen politicians. In this context, the sports and disability education courses were closed. The decision on this was made on February 16, 2008 in the responsible committee of the Bremen citizenship. In 2007 there were still around 800 sports students. As a result, for example, student teachers studying sport would migrate to the universities of Vechta and Oldenburg .

Location of the university and the guest house on the Teerhof , which lies on the Weser

The university is a campus university, and almost all facilities are centrally located at the university and the neighboring Bremen Technology Park.

Together with the technology park, the campus forms a district on the outskirts of Bremen and is conveniently located on the A27 motorway with its own exit. The university can also be easily reached by bus (lines 21, 22, 28, 31, 630, 670) or tram. There are three tram line 6 stops on campus .

On the Weser peninsula Teerhof there is a guest house of the university, another one on Lise-Meitner-Straße in the immediate vicinity of the campus.

The university management consists of the rector, vice-rectors and chancellor.

Rectors of the University:

Chancellor of the University:

At the University of Bremen there has been a resolution by the Academic Senate since 1991 that rejects military and armaments research ( civil clause ).

The university is part of the Association of North German Universities and the U Bremen Research Alliance.

In the second round of the Excellence Initiative (from 2012), universities and colleges honored with their future concepts

V
Universities in the Free Hanseatic City of Bremen