Logo of the VBN

The Verkehrsverbund Bremen / Niedersachsen GmbH (VBN) is a transport association founded in 1996 by companies involved in local public transport in the greater Bremen area and north-west Lower Saxony .

The network area includes the cities of Bremen, Bremerhaven , Delmenhorst and Oldenburg , the neighboring districts of Ammerland , Diepholz , Oldenburg , Osterholz , Verden and Wesermarsch as well as fourteen municipalities in the districts of Cuxhaven , Nienburg and Rotenburg . It thus corresponds in large parts to the Northwest Metropolitan Region , with which it is not, however, completely congruent. For example, areas of the Rotenburg (Wümme) district, which in its entirety belongs to the Hamburg metropolitan region, are also part of the VBN network.

The legal predecessor was the Bremen / Lower Saxony transport association , which in 1989 issued its first tickets recognized by all transport companies involved .

In order to distribute the functions of buyer and provider of local transport services to different organizations, the Zweckverband Verkehrsverbund Bremen / Niedersachsen (ZVBN for short) was founded in September 1996 . The task of the Zweckverband as an organ of the regional authorities is to plan and order the road-bound local public transport in the area of ​​the association.

The VBN itself was formed a month later as an amalgamation of the providers of transport services in the network area. At this point in time, a network tariff was introduced which enables the use of all public road and rail transport with uniform tickets .

The range of tickets includes a range of tickets for cash sales and season tickets available in advance. Bar tickets are u. a. issued individually and as four cards. There is a youth leisure ticket especially for young people under the age of 21 , which costs € 20.70 per month (as of February 1, 2020) and allows them to use all means of transport throughout the VBN.

To determine the fare, the network area is divided into tariff zones, which can be seen in the tariff area map. For each zone crossed during a journey, including the exit zone, payment of a further price level is due.

There are eight price levels with the designations A to H, whereby A allows travel within one tariff zone, G travel through seven zones and H that of the entire network area. Special price levels apply to the urban areas of Bremen, Bremerhaven, Delmenhorst, Nordenham, Oldenburg and Verden as well as the communities or parts of the community that are directly adjacent to the city of Bremen.

The ROW tariff applies to the Rotenburg district outside the VBN .

The systematically designated lines facilitate planning of offers and customer information. The VBN divided the network area into timetable areas, each of which was assigned a digit from 0 to 9, with which the numbers of the transport lines begin. This results in three-digit line numbers, with leading zeros in the Bremen timetable area.

In the area of local rail passenger transport , the lines are marked as follows: The lines of the Regio-S-Bahn with RS, Regionalexpresse and similar fast trains with RE and regional trains and similar trains with RB. 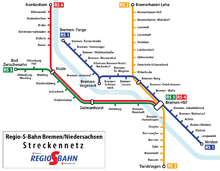 Route network of the Regio-S-Bahn 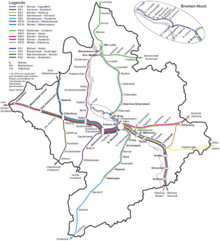 Lines in the VBN area

The following timetables appear annually in the VBN:

There is also a route network map for each district.

In the VBN, over 30 municipal and private transport companies for public rail and road transport are closely networked.