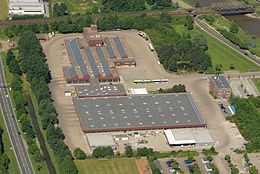 The transport company operates public transport on 19 bus routes , including 15 city ​​buses , two express buses and two night lines. The tram was discontinued in 1982. The main transfer point is the main train station ; The buses of many city bus and regional bus lines stop here.

By Heinrich Alfes applied for concession to the Bremerhaven Pferdebahn 50 years was carried out in 1879 for Bremerhaven by the Senate of Bremen and the Prussian territory parts Lehe and Geestemünde by the Land Directorate in Hanover.

In 1881 the Bremerhaven tram was founded by the Bremen entrepreneur Alfes .

From the horse tram to the tram

On June 26, 1881, the first horse-drawn tram line was opened. The stopless, single-track horse-drawn tram with passing points was stopped by waving. Soon there were over 170 horses. From 1891 the train went in the direction of Wulsdorf via Georgstraße to the Schweizerhalle (horse-drawn train depot). In 1892 1,303,478 people used the horse-drawn tram. In 1896 a line to Speckenbüttel was put into operation. The routes were gradually expanded to double- track.

From 1898 to 1908, the horse-drawn tram was converted into an electric tram operation , initially as an accumulator train . From 1898/1899 the line Karlsburg - Kaiserstraße - Rothersand - Lloydhalle ran. On this route - in the northwestern part - the excursion restaurant "Seelust" was built at the end of the 19th century; the tram and a Bremen brewery were involved. In 1908 there were five color-coded lines:

1982: Tram train in front of the main station

In 1908 184 people were employed. There were 88 railcars and sidecars as well as 22 tower and material cars. In 1911 the small train station of the Niederweserbahn on Weserstraße was included .

Motor buses have also been in use since 1925. In 1927 the length of the tram was 23.9 km. Tram line 2 was extended from Langen station to Park Friedrichsruh. In 1935 the first electrical points were introduced. The Fischereihafen ferry was in operation for the transport company from 1931 to 1933 and the Kaiserhafen ferry from 1953 to 1964.

In the post-war period from 1947 to 1958, in addition to trams and buses, trolleybuses were also used on line I Hauptbahnhof - Schiffdorf and from 1949 on line II Hauptbahnhof - Lehe - Stresemannstrasse . Until 1960, the VGB bus routes were marked with letters from A to U (with gaps).

From autumn 1960 there were still tram lines 2 : city limits Langen - Lehe - Ernst-Reuter-Platz - main station and 3 : Lehe station - Rotersand - main station. Before 1960, line 4 ran from Weserlust to the fishing port and line 3 ran through Wulsdorf to the tram station. Bus routes took over these and other areas.

In 1961 the bus depot in Langen city limits was put into operation and in 1980 the then central bus depot next to the fire station on the street Zur Hexenbrücke. Articulated buses have been in use since 1965, and since 1966 in one-man operation (without a conductor).

With the beginning of the summer timetable in 1966, on June 1st, the Bremerhaven AG (VGB) transport company introduced the strip card and its self-service via ticket validator .

The Leherheide district, at that time only the "Alt-Leherheide" with individual buildings, received a bus connection in the early 1950s. A denser residential development, comparable to green courtyards, was noticeable until 1960.

The first new residential area with dense development after the Second World War was in Grünhöfe. It was decided to connect this Geestemünder district with buses from 1957.

In the mid-1970s, full advertising also found its way into the VGB bus sector. The MAN articulated bus of the type 890 UGM 16A , car 105 was the first with so-called pop advertising in Bremerhaven. The advertised discount chain no longer exists today.

At that time there was a forerunner to today's ML / NL night lines. Among other things, this VGB night line operated on Christmas Eve from around 5:30 p.m.

In 1982 tram line 2 was converted to bus operation, since then only buses have been used in the entire network. The tram cars ( Hansa - short articulated cars ) were partly taken over by the Bremen tram , which used the same type. Some cars were given to the Timișoara tram in Romania in 1995/1998 . The Association for the Preservation of Historical Values ​​of Bremerhaven (Heinschenwalde location) owns three cars and one train is in the Hanover Tram Museum .

In 1989, 47 articulated buses and 36 standard buses served the network of 13 lines with a line length of 166.5 km. 342 people were employed. From 1990 the operation was switched to low-floor buses, starting with two solo vehicles.

The 90-minute tariff was introduced in 1992: the single ticket at 2.70 DM for adults and 1.40 DM for children became a season ticket , valid for 90 minutes with any change of vehicle, including a return journey. The 90-minute tariff will continue to apply today (2019).

In 1992 there were first signs of a computer-aided operations control system (RBL), which was specified in 1993. The first section of today's continuous bus lane from the main train station to the Wilhelm Raabe School went into operation. Matrix displays were used on the new line buses to display lines, destinations and routes.

In 1997 the City-liner (line CL) was extended to Langen. The Moon-liner (line ML) first operated on the 1997/98 timetable. Sellstedt and Bramel were served by bus line 7 and the overland line 15 to Bramel and Köhlen was discontinued. In order to better develop the Schierholz area, line 8 (now 508) could be extended through the entire Lotjeweg.

In 1998 the Weser Sprinter (community line 440) was set up; first of all, the bus took the Weser ferry from Bremerhaven to Blexen, in order to continue towards Brake and Oldenburg.

Since 2001, the VGB line buses have had the names of port cities that have been glued into the first door.

Numbers about the operation and the passengers

In 2011, BremerhavenBus supplied an area in and around Bremerhaven of 470.11 km² with 324,000 inhabitants through 18 lines with a line length of 310.48 km and 255 stops. The operating performance was 60.77 million passenger-kilometers in regular service, with 13.67 million passengers being transported in 2011. The vehicle fleet amounted to 13 buses and 57 articulated buses. VGB employed 202 people.

Most lines run Monday to Friday from 6 a.m. to 7 p.m. and Saturday from 9 a.m. to 10 p.m. every 30 minutes, outside these times every 40 minutes, and after 8 p.m. every hour. During the 40-minute intervals, the buses on lines 507 and 509 only run on partial sections, on line 508 a scheduled taxi is used. At 60-minute intervals, line 503 is limited to the route between Surheide and Flötenkiel.
On weekdays buses run from 5 a.m. to around 0.30 a.m., on weekends non-stop. The main lines 502 and 504/505/506 operate every 10 minutes, in addition to traffic times every 30 minutes on Sundays and holidays every 20 minutes, every 15 minutes on Saturdays. The express bus line S only runs Monday through Friday between 6:30 am and 6:30 pm. The section to the Langen school center is only served by a CallLinienTaxi on weekends. The night bus line ML operates every hour on Saturdays from 1 a.m. to 5 a.m. and on Sundays every hour from 1 a.m. to 7 a.m., as the other lines only run from 8 a.m. on Sundays. The night offer is supplemented by the NL line with two journeys at 1 and 3 a.m. Langen , or at 2 and 4 a.m. from Wulsdorf .
During the cruise season, the ColumbusCruiseCenter is served four times a day by shuttle bus from the main station.
The offer is reinforced by e-cars . There are also trips on line number 509 between Langen and Imsum.

As of February 21, 2020, BremerhavenBus owned 86 buses, 72 of which were articulated buses and 14 solo buses. Two double-decker buses are also available for city tours as HafenBus or for rented special trips.

The fleet consists of the following types: