The district of Wesermarsch is located in northwest Lower Saxony and comprises the area west of the Weser between Bremen and the mouth of the Weser. Its county seat is Brake , while the largest city is Nordenham .

The predominant landscape type is the marsh , two thirds of which is below the mean flood water level and is protected from flooding by dykes that separate the entire district from the water of the Weser, the North Sea and the Jadebusen. In the west the march connects to the Geest . The "Geest-Abbruch" is located on the B 211 in Loyermoor, bridging a height difference of a good 30 meters.

There are also various moors distributed over the district . B. the so-called floating moor on the Jadebusen in the district Sehestedt of the municipality Jade , as an outstanding natural monument of the unique kind. In the southwest are the Rockenmoor and the Grasmoor , in the middle of the district the Frieschenmoor and in the west at Jade the Kreuzmoor . The whole district is criss-crossed by extensive drainage channels and ditches.

The Hunte flows from Oldenburg coming to the district and flows Elsfleth into the Weser . At the mouth there is the Huntes barrier , which was built to protect against flooding .

The Oldenburg Wesermarsch consists of the Frisian populated areas of the Stadland and Butjadingens in the north and the Oldenburg Stedingen in the south. With its marshland, the Wesermarsch was and is particularly well suited for cattle and horse breeding. In the past, this made the Wesermarsch one of the wealthiest areas in the whole of the Oldenburger Land. Accordingly, the rich march farmers have provided their houses of worship with altarpieces, pulpits, baptismal fonts and organs in keeping with their rank.

Since around 6000 BC The course of the North Sea coastline is determined by the alternation of phases of flooding ( transgression ) and phases of subsidence ( regression ) of the sea level. While the marshland was hardly habitable during the flood phases, it could be settled and cultivated in the rest phases. In such a lowering phase z. B. the settlement at the Hahnenknooper mill around 900 BC. Created. The water of the Weser and its left tributaries was able to spread widely in the not yet diked marsh. Only in a slow transgression phase that started again in the following centuries was the river marsh more frequently flooded by salt water, which deteriorated the soil and drinking water quality, so that the settlements north of the Hunte had to be abandoned.

Since the 2nd century the inhabitants of the Wesermarsch started to protect themselves against the floods of the sea and the Weser by means of Wurten , later also by dikes . The shape of the Wesermarsch landscape was radically changed by the inrushes of the sea in the high and late Middle Ages: Butjadingen temporarily became an island, in the south of which the Heete connected the Jade Bay that was forming with the Weser. A second connection also made the Stadland an island; it ran from the east of the Jadebusen over the Ahne and the Lockfleth to the Weser south of Brake. A third island in the Weser Delta was west of Ahne or Lockfleth; in the west it was bounded by the Frisian Balge, an arm of the sea that occupied today's bed of the jade , in the south by the Liene, a river that connected the jade with the Weser and flowed north of Elsfleth into the Weser (at high tide) or emanated from her at low tide.

From the 16th century, a continuous band of dikes was built along the Weser, the Inner Jade and the Jade Bay. The last gap was closed in 1725 at the floating moor on the Jade Bay. The inlets between Jade and Weser were cut off from the influx of water from the North Sea and the Weser. Some of the waters silted up by themselves, some were dismantled into small drainage canals, and some were filled in. In this way, north of the Hunte and south of Langwarden, a contiguous area of ​​land between Jade or Jadebusen and Weser was created.

Roman sources already speak of Chauken , who populated the coastal area between the Weser and Ems. Tecelia is known as the Chauken trading center in the Wesermarsch near the mouth of the Huntes. From 250 AD many Chauken left their Wurten in the Wesermarsch as a reaction to a rise in sea level. The areas that became free were settled by Frisians from 400 onwards.

To the west of the mouth of the Weser, the Gau Rüstringen emerged , the eastern part of which today forms the north of the Wesermarsch. Since the 10th century, the residents of Rüstringen have secured the fertile marshland with earth walls in front of the sea. The churches in Rüstringen, built in the 11th century, testify to the considerable prosperity and the preserved freedom of the Frisians. In the Middle Ages, huge storm surges caused profound changes in the course of the coast. The attempt of the Counts of Oldenburg to get the northern Wesermarsch under their control initially failed. Only an allied Braunschweig-Oldenburg army succeeded in defeating the Wesermarsch-Frisians in 1514 in the battle of the Hartwarder Landwehr near Rodenkirchen .

Little is known about the history of Stedingen in the early Middle Ages. In 783, Bishop Willehad was given the task of Christianizing the coastal areas west of the Weser. In 1062 the Archbishop of Bremen, Adalbert, had the "uninhabited area" between "Aldenabrock" (Oldenburg) and Bremen transferred as possession. After 1062 Stedingen was gradually (re) populated. Initially, the Saxons founded settlements from neighboring Geest areas along the Weser above the Hune estuary and the Ollen . From 1106 Dutch were brought to Stedingen. The colonizers received privileges that were comparable to those in the northern settlement areas of the Frisians. At the beginning of the 13th century, there were conflicts with the Archbishop of Bremen, which led to the Stinging War. In the battle of Altenesch in 1234 the Stedinger lost their freedom.

Together with the Oldenburg family, the entire Wesermarsch belonged to Denmark from 1667 to 1773 . From 1774 the Wesermarsch was under the rule of the Duchy of Oldenburg . The administrative reform of 1814 eliminated the counts' bailiwicks as well as the cantons from the French occupation (1811/1813).

Since 1879, the area of ​​today's district was divided into the three Oldenburg offices of Brake , Butjadingen and Elsfleth . In 1933 these three offices, the Altenesch municipality from the Delmenhorst office and the Jade and Schweiburg municipalities from the Varel office were merged to form the new Wesermarsch office . At the same time, many of the old communities were merged into new large communities, including Altenesch and Berne to form the community of Stedingen .

The regional reform in Lower Saxony created the current layout of the Wesermarsch district on March 1, 1974:

As a result of the election result opposite, the district council is composed as follows:

Since October 1, 2013, the former mayor of Ovelgönne, Thomas Brückmann, has been district administrator. In the direct election on September 22, 2013, he received 54.10 percent of the votes cast. The turnout was 66.73 percent. His predecessor Michael Höbrink (SPD) did not stand for re-election.

The coat of arms of the district was approved as a national emblem on February 2, 1953. It shows two red bars on the left of the coat of arms in gold (former Duchy of Oldenburg ) and on the top right in silver a green medieval cog with green pennants and billowing sails on three masts and below it in green a silver Friesian warrior with a round shield and spear. A statue of the warrior ( Hartwarder Friese ) stands in the Rodenkirchen district of Hartwarden. The motto is " Lewer dod as Sklav " ("Better dead than slave").

The Wesermarsch district was in debt with 396.7 million euros at the end of 2012. This corresponds to the third highest per capita debt of all districts in Germany. 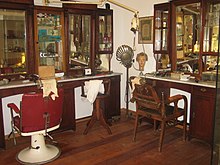 Old hairdressing salon from Berne in the Ovelgönne handicraft museum 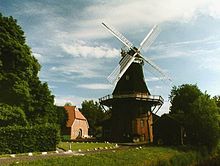 In the historical building ensemble from the Second World War, the bombing war is discussed, especially the effects in the Lower Weser region. One of the largest private military history collections is also on display.

In the large hall of the Friedeburg town hall in Nordenham, various guest theaters show performances, including a. from the Oldenburg State Theater .

Inauguration of the Weser Tunnel

The main traffic routes in the district are

Although the district used to belong to the Grand Duchy of Oldenburg, it was the Prussian State Railroad that brought the first railway into the district in 1867 near Jaderberg with its Oldenburg – Wilhelmshaven line.

The Oldenburg State Railway followed in 1873 with the main line Hude – Brake, which was extended to Nordenham in 1875 and as a branch line to Blexen in 1905.

The cross connections to the main line Oldenburg – Wilhelmshaven, which were opened between Brake and Oldenburg ( rubber railway) in 1896 and between Rodenkirchen and Varel in 1913 , branched off from here.

Finally , in 1922, the Deutsche Reichsbahn added the Delmenhorst – Lemwerder branch line to the network, which served freight traffic until 1998.

Until mid-December 2010, Deutsche Bahn AG only regularly operated the 46 km long Hude – Berne – Elsfleth – Brake – Nordenham line with six stations. The line has been integrated into the network of the regional S-Bahn Bremen / Lower Saxony operated by Nordwestbahn since mid-December 2010 . Museum trains operated by Delmenhorst-Harpstedter Eisenbahn GmbH (DHE) operated at irregular intervals on the route between Lemwerder and Delmenhorst until the end of 2009 .

The district is located on the waterways of the Weser that are deep to sea. There are port facilities in Nordenham-Blexen, Nordenham, Brake, Elsfleth and Lemwerder. The port facilities are connected to the rail network.

Lift bridge over the Hunte at Huntebrück

With the Weser tunnel near Stadland- Kleinensiel there is a permanent connection to the right bank of the Weser and the A 27 .

In the area of ​​the district there are the following ferry connections over the Weser:

In the Wesermarsch district, the Hunte can only be crossed by motor vehicle at Huntebrück. There is a lift bridge there .

Until the territorial reform of 1974, the places of the then municipality Landwürden on the eastern side of the Weser belonged to the district, as well as Germany's largest river island , the Harriersand , which served as an interim storage facility for US resettlers (via Bremerhaven ). The territorial reform separated the centuries-old joint affiliation of this island and the municipality of land dignity to the former Grand Duchy of Oldenburg and later the administrative district of Oldenburg .

On July 1, 1956, the district was assigned the distinguishing mark BRA (Brake) when the vehicle registration number that is still valid today was introduced . It is still issued today.