The habitats to be protected in this national park include the mudflats , sandbanks , salt marshes , beaches , dunes and estuaries into the North Sea . Particular attention should be paid to the fauna and flora typical of the Wadden Sea .

The North Sea coast is unusually flat. The sea floor only drops a few centimeters per kilometer. Twice a day the tide carries sand , clay and silt into the Wadden Sea area. Dunes mark the coast , which the wind builds up from the fine grains of sand from the exposed mudflats.

The Wadden Sea is the second most productive ecosystem after the tropical rainforest - only this surpasses the Wadden Sea in terms of living biomass. The life forms found in the Wadden Sea include diatoms , snails , worms , mussels and shrimp . A typical inhabitant of the sand mudflat is the lugworm , which lives in a U-shaped tube under the mudflat surface.

Up to 4000 animal and plant species specialize in the unusually nutrient-rich habitat of the Wadden Sea. For example, shelduck live on the mud flats, hundreds of thousands of which can be found on the surface of the mudflats. The north-western European shelduck population of around 180,000 birds also spends its moulting season in the Wadden Sea between July and September. Around 200,000 eider ducks also spend their moulting season here; around 1000 pairs of eider ducks use the tidal flats of the North Sea as a breeding area. Most of them breed on the island of Amrum .

At the same time, the Wadden Sea is a resting area for breeding birds from Nordic countries, which eat the fat reserves that they need for successful breeding. There are around 10–12 million waders , geese , ducks and seagulls in the entire Wadden Sea .

Seals can be seen on the sandbanks in the Wadden Sea and salt marshes, sandy beaches and dunes border the Wadden Sea. On the salt meadows, the avocets and terns serve as breeding grounds, blooms in summer, the beach thistle and the beach lilac . The most typical plant of the dunes is the common beach grass , which fixes the dunes with its extensive roots . 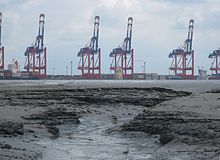 Watt between Langlütjen II and the Bremerhaven container terminal

History of the national park

Since the Ramsar Convention of 1971, today's national park areas and the Dollart have been protected as wetlands of international importance .

In 1979, Hans-Joachim Augst and Holger Wesemüller submitted an expert report that developed a zoning model based on the differences in importance of different areas of the Wadden Sea that are worthy of protection . The Lower Saxony regional planning program of 1982 then specified the development of a nature park “East Frisian Islands and Coast” as a regional planning goal. This idea was picked up from 1983, and planning for a comprehensive national park began. At the beginning of 1984 the cabinet resolution basically approving a national park and on January 1, 1986 the National Park Ordinance came into force.

According to the UNESCO "man and biosphere" program, the entire national park was recognized as a biosphere reserve in 1992 , see the Lower Saxony Wadden Sea Biosphere Reserve .

Initially, the national park was protected by an ordinance since it came into force in 1986, which was replaced by a state law in 1999. On July 11, 2001, the law on the “Lower Saxony Wadden Sea” National Park (NWattNPG) was newly announced: Numerous areas for tourism were removed from the scope of the national park or downgraded in the zoning. For this purpose, a pure marine area off the islands of Borkum and Baltrum and the former nature reserve in the eastern part of the Dollart were included in the national park. This increased the protected area from 240,000 hectares to almost 280,000 hectares.

In January 2002, the East Frisian nature conservation group Wattenrat Ost-Friesland lodged a complaint with the EU Commission in Brussels against the removal or downgrading of more than 80 partial areas for tourism, mainly on the East Frisian Islands . The Commission incorporated the complaint into an ongoing infringement procedure against Germany (complaint number 2002/4099, Ref .: ENV A2 / MD / avdm D (2005) 6096). After more than four years, in a letter dated October 25, 2006, the EU Commission informed the Wattenrat-Ostfriesland that the complaint procedure had been closed “because the Federal Republic of Germany has now designated enough areas as FFH proposal areas” (Ref .: ENV A.2 / MD / pd D 2006 21119).

This national park is listed by the IUCN in "Category II, National Parks". It should be noted, however, that the World Database on Protected Areas (WDPA) is based on the reports from the individual countries and there is currently no independent review of the assigned categories, which can lead to errors in the listing. It is also important to know that the categories from I to VI reflect the objectives of the protected area management, but are not an indicator of quality, or success or failure. However, the "European Environment Agency" (EAP) lists the Lower Saxony Wadden Sea National Park in "Category V, Protected Landscape", i.e. roughly a landscape protection area (written information from the UNEP World Conservation Monitoring Center (UNEP-WCMC) in Cambridge on 23 October 2008).

In 2008, the Wadden Sea in Lower Saxony and Schleswig-Holstein was proposed to UNESCO for nomination as a UNESCO World Heritage Site . President of the German UNESCO Commission has been Walter Hirche (FDP) since 2003 , who was Minister of Economics in Lower Saxony from 2003 to 2009.

In the run-up to the nomination of the Wadden Sea as a UNESCO World Heritage Site, a senior officer of the Switzerland-based International Union for Conservation of Nature (IUCN) and representatives of the tourism industry in and around the Wadden Sea took part in an expert visit . From newspaper reports published at the same time and later, however, it emerged that the UNESCO nomination should primarily serve as an “internationally effective marketing instrument for the tourism industry” and that it did not involve any additional restrictions through nature conservation measures.

“We have to make the UNESCO World Heritage Site known at home and abroad and point out its importance as a unique ecosystem with a particularly high level of biodiversity, says Friesland's District Administrator Sven Ambrosy . So far, despite its age, the Lower Saxony Wadden Sea National Park still has a comparatively low level of awareness. [...] A region can only market itself if it is proud of itself and loves it. "

“According to the IHK , this international award also offers great opportunities for tourism. “The region can and must grow with the pound”, explained the IHK boss. Should the Wadden Sea actually be awarded this title, the entire North Sea coast would receive a new trademark. Kolck emphasized that recognition as a world natural heritage would not change the current legal situation. "

On February 19, 2010, the law on the “Lower Saxony Wadden Sea” National Park was changed again and adapted to the Federal Nature Conservation Act . As a result of the amendment, the national park was enlarged by approx. 670 km², mainly in the area of ​​Cuxhaven and the Elbe-Weser estuary. The total area grew to almost 3500 km². 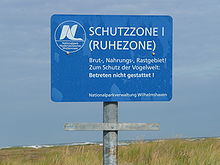 In the past, nature conservation associations and groups have critically monitored the development of the national park in five-year balances. At that time the associations worked together in the "AG National Park" under the leadership of the WWF.

On the occasion of the 25th anniversary of the “Lower Saxony Wadden Sea” national park in 2011, NABU criticized the fact that parts of the area were not effectively protected despite being designated a national park and world natural heritage site, and called for clearer protection of all three Wadden Sea national parks. Despite formal protection, 19 out of 33 bird species have become rarer in the past 25 years, including oystercatchers and shelduck . There is no professional ranger system to look after the protected areas in the national park. Also problematic are a north German concept for the grid connection of offshore wind farms, littered beaches and the planned river deepening of the larger rivers Ems , Weser and Elbe .

In the national park there is no restriction on fishing even in the strictest protection zones. The Pacific oyster, released by fishermen, is spreading in the park. To catch one kilo of North Sea crabs , seven kilos of bycatch in the form of small fish, starfish and other marine animals are brought on board the cutter . This bycatch is dumped dead or injured back into the sea and only serves as food for seagulls . Despite the ban, fireworks are started every year without sanctions . On the islands in the park, stray house cats kill many birds, including rare species such as the black godwit and the Kentish plover . Wind turbines were built close to the border with the national park. As on all sea coasts in Central Europe, large amounts of plastic waste are washed up on the shore and the eutrophication caused by the nutrient load of the North Sea also affects the park. Ducks and geese are still allowed to be killed during migratory bird hunting. In the national park, 21 kite spots have been designated for kite surfers, which leads to the disturbance of the resting birds. In the salt marshes there are ditches 10 meters wide for drainage, which led to a massive decline in the typical salt marsh plants and the earlier bird and insect diversity there.

The national park is divided into three zones with different protection status.

Due to the occurrence of numerous rare and endangered species, the Lower Saxony Wadden Sea National Park is subject to area protection.

The FFH area National Park Lower Saxony Wadden Sea with the area number 2306-301 has an area of ​​276,956.22 ha and is described as a coastal area of ​​the North Sea with salt marshes, mud flats, sandbanks, shallow bays and dune islands. Geest cliff overlaid with drifting sand with coastal heaths, grasslands and dune forests. Parts of the Ems and Weser estuaries with brackish tidal flats. The recreation zone of the national park (approx. 2000 ha) is not part of the area report.

The habitat types are protected :

The bird sanctuary of Lower Saxony Wadden Sea and the adjacent coastal sea with the area number 2210-401 has an area of ​​354,882 ha and is described as a coastal area of ​​the North Sea with salt marshes, mud flats, sand banks, shallow sea bays and dune islands as well as parts of the Ems estuary with brackish tidal flats and part of Dollart. Water areas of 10-12 m depth of the 12 nautical mile zone adjoining the open sea. For bird protection, it is a wetland of international importance, an outstanding breeding and resting area in Lower Saxony for over 30 species in Appendix I of the EU Birds Directive and numerous other water and wading bird species.

Islands in the national park

Large parts of the islands belong to the protection zones I + II, the uninhabited islands ( Lütje Hörn , Memmert , Minsener Oog and Mellum ) may not be entered all year round without a permit (protection zone I).

Only the actual settlement and infrastructure areas on the inhabited islands are completely excluded from national park protection. In the context of protection zone III, there are also certain island areas that are primarily used for recreation (e.g. designated bathing beach sections).