Bult-Schlenken complex in a regenerating rain bog in northwest Germany.

Bult in a regenerating rain moor in northwest Germany. 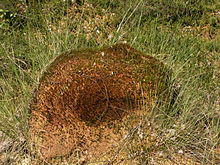 Raised peaks made of peat and peat moss (sphagnes) or brown moss ( Amblystegiaceae ) - so-called bultes - together with wet, sometimes water-filled depressions - so-called Schlenken - form a characteristic micro-relief . The different zones have different plant formations in the smallest of spaces, depending on the bog water level and the nutrient conditions as well as the different location requirements of the plant species.

Bult-Schlenken complexes occur in rain and intermediate moors. Their occurrence largely coincides with the natural distribution of these ecosystems (see figure on the right).

In rain bogs, the bulte are those locations that are driest. Depending on the development and condition of the bog, decaying bults exist in both intact and drained raised bogs. In periods of low precipitation in midsummer, the rainwater-fed gullies can dry out and reduce the growth of peat moss in this area. Slower growing peat mosses can catch up again. The Bult-Schlenken complexes are more pronounced in more continental regions. In oceanic rain moor areas, the relief is mostly only shallow undulations.

The step complexes are very much endangered by the smallest interventions in the water balance. They are particularly sensitive to impact and damage. Footpaths are usually still visible after years.