Peat moss in the canned bog 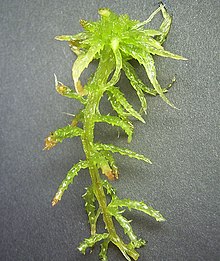 Gametophyte of a Sphagnum moss

The peat moss ( Sphagnum ), also known as white moss , is a genus of moss and belongs to the deciduous moss in the broader sense. Most live in nutrient-poor, acidic habitats. Due to the destruction of the peat moss habitats, mainly moors and wet heaths, the mosses are endangered and in some cases are in drastic decline.

The peat mosses differ from the other deciduous mosses in several ways. Your pre-germ does not consist of a network of cell threads, but is thallous . The gametophyte is an unbranched stem that is covered with lateral branches and forms an "end bud" at the tip. The plants die at the base and continue to grow at the top. The leaves have no ribs. The leaves with mostly screwy leaf position in 2/5- divergence consist of chlorophyll- containing , living chlorocytes and empty, dead hyalocytes . The side branches are formed in clusters on every fourth stem and stand in two to seven. Rhizoids are absent. The sporogon is sessile, but it sits on a stem-like extension of the gametophyte ( pseudopodium ). The capsule does not have a peristome and opens with an audible bang when the pressure is reduced by ripping off the lid. In the capsule, the archespor overlays the columella . The antheridia are round in shape and open without a cap.

From the haploid Meio spore first forms a filamentous protonema (pre-seed). To do this, peat mosses need a mycorrhizal fungus that provides the necessary nutrients (especially nitrogen). The protonema then grows into a flat thallus and forms thread-like roots ( rhizoids ) on the underside . Only then does the typical sex cell-forming moss plant (gametophyte) grow on this tissue thallus.

The gametophyte consists of a stem and has a palm-like crown (or rosette), beneath which the downwardly curved side branches are arranged in several whorls . The stem bark consists of dead, perforated cells, which soak up water through capillary effects . The leaflets consist of a network of elongated cells (chlorocytes) containing chloroplasts , between which there are also perforated water storage cells (hyalocytes). This structure allows peat mosses to absorb enormous amounts of water. Sphagnum mosses can also die at the base, so that a once branched plant can become several individual plants.

The sporophyte lifted up from a pseudopodium.

The antheridia (male sex cell containers) sit in the leaf axils of particularly colored and shaped branches of the rosette and have long stalks. The female archegonia , however, sit at the tip of the side branches.

The sporophyte that develops after fertilization consists only of a thickened foot, a short stalk and the capsule. As with the other mosses, it is nutritionally dependent on the gametophyte. The sporophyte is lifted by a pseudopodium, which is formed by the gametophyte. The spore mother tissue ( archespor ) is not formed from the outer layer of the inner spore capsule cells ( endothecium ), as in other deciduous mosses , but from the inner cells of the outer layer ( amphithecium ).

Peat mosses are alternately moist plants that are of decisive importance for the formation of intermediate and raised bogs . They are excellently adapted to the extreme conditions of these locations. The peat moss has the following competitive advantages:

Peat mosses reduce their metabolic processes to a minimum in dry periods . If it then comes to precipitation , these plants are able to store more than 30 times their dry mass in water in their large storage cells (hyaline cells) . The cells of the plant behave like swelling bodies. 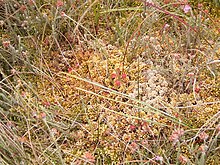 The peat moss is largely responsible for the extreme living conditions in the raised bogs. Since it has no roots, it feeds on rainwater and the nutrients it contains, which it stores. As a result, the peat moss removes it from the environment and the acid content in the bog increases. Due to the exclusion of air in the bogs, organic substances are not or only partially decomposed and today provide information about the past - including the bog corpses , whose skin has often been preserved leather-like by the tannic acid of the peat moss and whose hair and teeth are therefore often so well preserved because there are no destructors that decompose these parts. Without the acidic environment of the moor, for which the peat moss is largely responsible, the dead would have long been decomposed by destructors.

Peat moss as an insulating material in a log house

Peat moss is used in nurseries and in potting soil to improve the water retention of the soil ; it is also used as packaging material and as fuel.

Nowadays, peat moss is also used as an absorbent pad in “eco diapers”. The latter is one reason for the destruction of large raised bog areas in Chile , for example .

The targeted cultivation of peat moss ( sphagnum farming or peat farming ) as a substitute for peat in garden soil is still in the experimental stage . This process is intended to reduce peat extraction in bogs when it is ready for the market.

Peat moss was, and sometimes still is, an important building material in log house construction . Moist peat moss is placed in a sufficiently dense layer as an insulating material between the individual trunks and remains in the form once it has dried, even after drying. In addition, it has an antibiotic effect, is permeable and water-storing - both have a positive effect on the durability of the wooden construction.

Due to their anatomical and physiological properties, such as a missing cuticle and the direct absorption of substances from the air, peat mosses are used for active biomonitoring . One monitoring method is the sphagnum bag technique, by means of which peat mosses that were collected in areas with low levels of pollution are exposed over a period of three months in nylon nets in the area to be monitored and then analyzed.

The habitat of peat mosses are nutrient-poor , more or less acidic wetlands on and in bodies of water, especially in raised , transitional and fens , in swamps , forests and on shady rock formations. Peat moss is largely absent in lowland rainforests , deserts and steppe areas .

Apart from Antarctica, the peat moss can be found on all continents worldwide, mainly in boreal regions, but also in cool, wet mountain regions and habitats influenced by the oceans. In the tropics , they predominantly populate mountainous regions. The largest proportions of the distribution are in the northern hemisphere with the clear focus in the large moor areas of the cold to warm temperate climates of northern Europe , Asia and North America . The northernmost distribution goes far beyond the Arctic Circle with the settlement of Greenland , Alaska , the Taimyr Peninsula, Svalbard and northern Scandinavia . The extensive distribution to the south extends up to 40 ° north latitude , in the arid regions of Central Asia it is somewhat higher with 50 to 60 ° north latitude.

Another closed Asian sub-area extends from Kamchatka via Japan , Manchuria , the southern Chinese mountains, Vietnam , the Philippines , the Indonesian islands of Sumatra and Java beyond the equator further south. Species of this genus are also found in the mountain forests of Australia and New Zealand .

In Europe, the main focus of the distribution is in the Atlantic and sub-Atlantic regions of Western Europe, except in the aforementioned Northern Europe . The occurrences continue to the south into the Mediterranean area .

Worldwide, depending on the source, 150 to around 300 species are very controversial and are divided into nine sections. There are around 40 species in Europe and around 35 different species in Germany . 34 species are counted in Austria.

The following species can be found in Germany:

The peat mosses are endangered by the destruction of the habitats. This is reflected in the Red List of Endangered Species of the International Union for Conservation of Nature IUCN and the individual nation states and their countries. The IUCN rates Sphagnum novo-caledoniae as endangered (“vulnerable”).

Switzerland has put 27 species in its national red list of mosses at different levels of risk. Most of them are listed as “Least Concern”, 8 species as potentially endangered (“Near Threatened”) and 5 species as “Vulnerable”.

In the Bern Convention , the convention on the conservation of European wild plants and animals and their natural habitats from 1979, the species Sphagnum pylaisii is designated in Appendix 1 as a species to be protected.

All species of peat moss enjoy certain protective mechanisms with the Fauna-Flora-Habitat Directive No. 92/43 / EEC in the updated version of January 1, 2007. They are listed in Appendix V and can therefore be subject to withdrawal and usage restrictions. Furthermore, their habitat is placed under protection through the inclusion of the “Sour Moors with Sphagnum” in Appendix I, which means that special protected areas must be designated for these habitats. Living raised bogs and active surface bogs are even identified as habitat types to be treated with priority.

In the Federal Republic of Germany, on the basis of the Federal Nature Conservation Act (BNatSchG), all peat moss species are also placed under protection via Annex 1 of the Federal Species Protection Ordinance (BArtSchV) and subsequently designated as specially protected species.

Switzerland protects the moors as habitats for peat mosses in the federal law on nature and homeland protection and accompanying ordinances and promotes the renaturation of moors and moorland. They can be found as Appendix 2 of the relevant ordinance on the list of protected plants. Furthermore, on the basis of the Rothenthurm initiative, the moors were included in the Federal Constitution with Art. 78 Paragraph 5 and are listed here under protection in the inventory of habitat types worthy of protection.

In the United States of America , various states list a total of 15 species of peat moss as threatened and endangered plants.