The Taimyr peninsula ( Russian Таймырский полуостров Taimyrski poluostrow ) is about 400,000 sq km peninsula between Kara and Laptev Sea ( Arctic Ocean ) in the north of the Krasnoyarsk region (former Autonomous District Taimyr ) and from Siberia and Russia ( Asia ), and is the northernmost continental mainland part of the Earth . 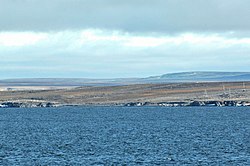 The Taimyr Peninsula is located north of the Taimyr Depression , the central part of the North Siberian lowlands . In the north it separates the western Kara Sea from the eastern Laptev Sea, which belong to the Arctic Arctic Ocean. Its western boundary is the small estuary (mouth of the funnel) of the Pjassina , but at most the Yenisei gulf as an elongated estuary of the Yenisei , its southeastern part is the Chatanga gulf as a large estuary of the Chatanga .

The peninsula separates the catchment areas of the western rivers Yenisei and Ob , which each have about 400 and 800 km long estuary funnels on the Kara Sea, especially from that of the eastern Lena , which forms the great Lena delta far beyond the Chatanga Gulf as an estuary delta into the Laptev Sea. The contrary mouth shapes of these rivers reveal some things about the changing flow conditions that these Siberian rivers cause in the Kara and Laptev Seas, which have a lasting effect on the local climate .

The peninsula is a maximum of 1050 km long in west-east direction and up to 520 km wide in north-south direction. Cape Chelyuskin , located in its extreme north , about 1300 km beyond the Arctic Circle , with its hilly hinterland, represents the northernmost mainland mass on earth, because further north there are only islands in the Arctic Ocean. As part of the cape, the peninsula advances into the Arctic Ocean up to the geographical latitude of 77.43 ° North. To the north of the cape, across the Wilkizki Strait , which connects the Kara and Laptev Seas , is the Severnaya Zemlya archipelago , which, with three main islands, represents the northernmost region of Siberia.

The Byrranga Mountains run across the peninsula in a south-west-north-east direction and reach a height of about 1125  m to the north-east of the Taimyrsee, through which the Taimyra flows in a south-north direction . The peninsula is divided by numerous rivers : In addition to the Taimyra as the longest river on the peninsula, the western Novaya also flows there as a tributary of the Chatanga and the eastern Novaya as a tributary of the Chatanga Gulf. In the landscape with many swamps, there are also thousands of still waters : In addition to the Taimyrsee, the largest lake on the peninsula, there are also Arylachsee , Kungasalachsee , Loewinson-Lessing-See and Portnjaginosee .

Settlements are only south of the Taimyr Peninsula, along the rivers and their mouths into other rivers or parts of the sea. The reason for this is the difficult land transport links during the summer when the areas with permafrost thaw on the surface. Winters are long and extremely cold, the summer short, cold and often fog rich with resources to July 5 ° C.

While hunters of the indigenous population roamed the peninsula early on, the offshore islands of Severnaya Zemlyas were only discovered in 1913 in search of an ice-free northeast passage in summer .

The Taimyr Peninsula and the offshore waters of the Kara and Laptev Seas represent a large wilderness that has not yet been touched by humans . The area includes tundra with mosses and lichens and arctic cold and frost debris deserts , which are home to polar bears , reindeer , musk ox , walrus and White whales (Beluga) are. Millions of sea ​​birds nest here in summer .

The peninsula's reindeer herd is the largest in the world. The number of their animals (depending on the system as Rangifer tarandus sibericus , or as a form of Rangifer tarandus tarandus ) has fluctuated between 400,000 and 1,000,000 since 1970. In winter the herd moves south; their winter grazing grounds are south and southeast of the peninsula.

The peninsula was the last refuge for musk ox in Eurasia before the species became extinct on this continent. The most recent fossils found are around 2,700 years old. In 1974 and 1975 a herd of 30 musk oxen from Canada and Alaska were successfully reintroduced to the peninsula. In 2010 the number had grown to 6,500, in 2012 to 8,000.

On the Taimyr Peninsula are parts of the Great Arctic Protected Area ( Bolshoi Arktitscheski Sapowednik ), a nature reserve founded in 1993, which has 41,692  km² of land and sea areas. It is currently Russia's largest protected area ( sapovednik ) and it has a rich fauna. Around 4,000 indigenous dolgan and nganasans live there and traditionally hunt, fish and breed reindeer there.

In addition, there has been the Taimyr Conservation Area ( Taimyrski Sapowednik ) on the Taimyr Peninsula since February 23, 1979 , which was granted the status of a biosphere reserve by UNESCO in 1995 . Its administration is located in the village of Chatanga , which lies on the river of the same name. The complex consists of five individual areas. The main tundra area (13,240.42 km²) of the reserve is located directly west of Lake Taimyr, including some western lake foothills. The Bikada Conservation Area (9377.6 km²) extends on the eastern shore of the lake . On the east coast of the peninsula is the Arctic area (4332.2 km²). The Ari-Mas area (156.11 km²) and, on the other side of the river and thus no longer on the peninsula, Lukunski (90.55 km²) are located near the river Khatanga . In the village of Chatanga you can find out more about the nature and ethnography of the state biosphere reserve "Taimyrer" in the museum founded in 1993, about the settlement, traditional nomadic life and the natural environment.