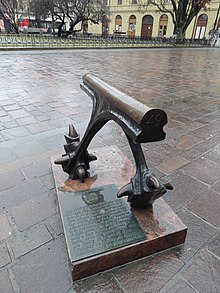 The 49th parallel is marked with a monument in Prešov (Eperies).

The latitude (B or φ ), and geodetic latitude or latitude mentioned ( latin latitudo , English latitude ; international abbreviation Lat. , Or LAT ) is the in the square in the unit level specified northern or southern distance of a point of the surface of the earth from the equator . The latitude assumes values ​​from −90 ° at the south pole over 0 ° at the equator to + 90 ° at the north pole. Instead of the sign , the designations N and S for north or south are also permitted. B. the latitude of the South Pole can be noted as 90 ° S.

The latitude uses ellipsoidal coordinates ; one measures the angle between the normal (perpendicular) to the earth ellipsoid and the equatorial plane of the earth. Unlike the geocentric latitude, it is not measured to the center of the earth, nor is it related to the true vertical direction , as is the case with the astronomical latitude .

The latitude is traditionally given in the sexagesimal system with degrees , minutes and seconds , where a degree corresponds to 60 minutes and a minute to 60 seconds (as in the time). In decimal fractions are indicated.

There are - depending on the desired accuracy - different methods of representation, e.g. B .:

The distance between two circles of latitude whose latitude differs by 1 ° is always around 111 km or 60 nautical miles . However, the distance at the poles (111.694 km per degree) due to the flattening of the earth is slightly larger than at the equator (110.574 km per degree), as the curvature from the pole to the equator increases by about 1%.

When specifying location coordinates , the latitude must always be entered first, then the longitude: "B before L, as in the alphabet" . The alphabetical rule also works for the English terms "Latitude" and "Longitude". This convention has its basis in history: the latitude could already be determined quite precisely centuries before the longitude.

Determination of the geographical latitude

The width can be determined quite easily from the highest position of the sun (midday latitude ) or from the height of the culminating stars. The measurement can take place , for example, with the aid of a sextant .

In the northern hemisphere of the earth, the height of the relatively bright polar star (Polaris) above the horizon indicates the degree of latitude fairly precisely. At the equator , the North Star appears on the horizon, at the North Pole it is almost vertical in the sky. In fact, the star location of Polaris with a declination of (currently) about 89 ° 16 'does not exactly correspond to the celestial pole ; the resulting error fluctuates twice a day between 0 ° and approx. 0.75 ° due to the rotation of the earth and can be reduced by simple formulas or averaging .

Already the seafarers of the late 15th century knew how to use the width for navigation . Determining the longitude , however, was more complicated and required precise dead reckoning or the measurement of moon- star distances. Since the end of the 18th century it has been carried out with the exact time of chronometers , since the middle of the 20th century using various methods using electromagnetic waves from terrestrial transmitters, and since the 1990s with GPS satellite receivers.

With a perfectly stable (flattened) ellipsoid of revolution (no mountains or valleys, constant density) the ellipsoidal latitude would correspond to the astronomical latitude. In addition, the geocentric latitude for each location would be numerically closest to the equator (i.e. smallest amount).

Influence on the climate

Since the mean solar radiation on a point on the earth's surface depends on its geographical latitude, this largely determines the local climate and can be used to define the (geographical) climatic zones : The tropics lie between the tropics (23 ° 26 ′) and the polar regions above the polar circles (66 ° 34 ′), in between are the subtropical and temperate zones .

The climate also depends on other factors; so are z. B. European locations because of the North Atlantic Current are usually significantly warmer than Asian and North American locations of the same geographical latitude.

The geographical latitude also has an influence on the wind conditions . In earlier times, when ships were still mostly sailed, they were of great importance for shipping as they are today for sailing ships . From the time of the sailing ships, names such as horse widths or roaring forties have been preserved, which assign the wind conditions to corresponding widths. 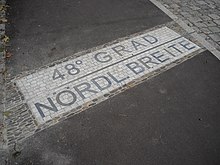 The word latitude is used with different meanings. On the one hand it can mean the latitude in degrees itself, on the other hand the circle of latitude on which all places of the same latitude lie, and here sometimes only those circles of latitude whose latitude is an integer in degrees.