Modern drum sextant with binoculars monocular , measuring angle 30 °. Below the measuring drum, on the left the sun and moon filters

Navigator when measuring the height of the sun

A sextant (mirror sextant; from Latin sextans 'the sixth part' ) is a nautical , optical measuring instrument with which one can determine the angle between the lines of sight to relatively distant objects, in particular the angular distance of a star from the horizon . It is mainly used to measure the elevation angle of the sun and stars for astronomical navigation at sea, less often also in aviation , earlier also in expeditions as well as in astronomy and land surveying .

The name sextant comes from the device frame, which represents a sector of a circle of around 60 ° (one sixth of a circle), which means that, due to the law of mirrors, angle measurements up to twice the extent, i.e. up to 120 °, are possible. The sextant therefore has a scale of at least 120 °. In contrast, its predecessor, the octant , had an angle scale of at least 90 °. Its frame encompassed 45 °, i.e. an eighth of a circle, from which - analogous to the sextant - its name is derived. In contrast, the quadrant is a protractor with respect to the perpendicular direction and measures (without reflection) elevation angles of up to 90 °.

The forerunner in astronomical navigation was the Jacob's staff .

Construction of a marine sextant

The basic components of the sextant are the pointer arm ( alidade ) , with which the measurement is made and whose exact angle setting can be read on the degree arc ; a mirror (index mirror) which is mounted on the pivot point of the alidade perpendicular to the plane of the instrument and rotates with it; and a fixed mirror (horizon mirror ) which is parallel to the index mirror when the alidade is set to zero. It is either semi-transparent (full view mirror ) or it has a mirrored right side and a non-mirrored, translucent left side (half mirror) . A small telescope aimed at the horizon mirror or just a simple tube without lenses is used to sight the targets.

The alidade is moved by a screw located at its lower end , which engages via a worm gear with a toothing on the lower edge of the arc (the arc corresponds to the pitch circle of the theodolite). In modern sextants, the screw carries a drum with engraved degrees for easy fine reading (drum sextant ). For larger movements of the alidade, the worm can be lifted out of the teeth using a pawl .

Other components are various filters (shadow glasses) that can be folded into the beam path. The sun can be targeted with the strongest filter, the moon with the middle one , without the image of the horizon being outshone.

Some models have an artificial horizon that works on the principle of a spirit level . This spirit level can then be seen through the viewing opening via additional mirrors and serves as a physical directional reference for the measurement if the horizon is not available as an optical reference.

Beam path in the sextant

If you look through the viewing opening at the horizon mirror, you can see one of the two targets in a direct view through it (because of its semi-transparency or because of the non-mirrored half). The horizon mirror is inclined in such a way that the index mirror is reflected in it and at the same time the image reflected by it can be seen. The observer therefore sees two superimposed images: one directly, the other after double reflection. Even with a half mirror, the images are not strictly side by side, but are partly superimposed because the border between the mirrored and non-mirrored part is very blurred when the telescope is set to 'infinite'.

In the zero position of the alidade, the horizon mirror and the index mirror are parallel and both images are therefore congruent. (Strictly speaking, this only applies to an infinitely great distance from the observed target, because there is a small parallax due to the difference in height between the viewing opening and the index mirror, but this parallax can be neglected in the case of stars and distant landmarks.) To measure the angle between two targets, Using the alidade, rotate the index mirror in relation to the horizon mirror until the images of the two targets coincide. Because of the law of reflection, angle of incidence = angle of reflection , the total angle of reflection is twice as large as the swivel angle of the alidade. The scale is therefore labeled with double the value of the swivel angle. For this reason, a 60 ° degree arc is sufficient for a measuring range of + 100 ° to −20 °.

If the Sextant not held completely still during the measurement, both images vary together in the field back and forth, so that an unambiguous superposition of both goals and thus a correct measurement is still possible, though a bit more difficult. The sextant can therefore be used hands-free and in a fluctuating environment such as B. used on board a ship.

Measurement of the lower edge of the sun

At the moment when the alidade is correctly set, the observer determines the time of the observation with the help of a precise clock (most conveniently by calling an assistant). The observer can simply bring the image of the star close to the horizon and wait until its ascending or descending movement in the course of the apparent rotation of the sky carries it through the horizon. It is then only necessary to determine the exact time of this event.

The integer degrees of the set angle are read on the degree arc, the fractions of degrees for drum sextants on the subdivision of the reading drum. Before the measured angle can be used for navigation, several computational corrections are required, including: a. for device errors (to be determined beforehand) ( index errors ), the difference between the horizon and the horizontal (so-called skin depth , depending on the observation height ), the falsification of the celestial height due to atmospheric light refraction and, if applicable, the distance between the celestial top or bottom edge from the center.

When used in terrestrial navigation or for surveying tasks, the sextant is used analogously, but is sometimes also held horizontally if the horizontal angles between three positions are measured according to known landmarks. To calculate distance by measuring elevation angles on known structures, e.g. B. lighthouses, the exact height of which can be found in a beacon directory, the sextant is held vertically.

Animation: How a sextant works

Even in the days of sailing, sextants had a measurement accuracy of about one arc minute (1/60 degree), which corresponds to a position accuracy of one nautical mile . Modern sextants can achieve a mechanical accuracy of 10-20 arc seconds.

In nautical practice, the handling of the sextant v. a. made difficult by swell, so that the actual measurement accuracy is seldom better than a minute of arc; under difficult conditions, a measurement with an error of five arc minutes can still be considered good. In aviation, the high speed of the aircraft leads to inaccuracies, since the aircraft already moves during the measurement process by an amount that is far greater than the accuracy of the instrument. This error can be largely eliminated by " bracketing ". Here the same star is measured at the beginning and the end of the observation series in order to obtain an average value. 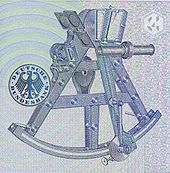 Sextant on the 10 DM banknote

The first concept for a device for measuring angles with the help of mirrors came from Isaac Newton , who submitted his design to the Royal Society in 1700 . However, his sketches went unnoticed and were not published until 1742, after his death.

Around 1730 developed independently John Hadley (1682-1744), English astronomer and mathematician , and Thomas Godfrey (1704-1749), optician and inventor in the British colonies in America, the sextant and submitted their designs to the Royal Society. Hadley's construction, then an octant, turned out to be the more practical and became the forerunner of all other sextants. However, both versions were considered to be equivalent and so both inventors shared a price that had been given for the precise determination of position at sea.

The first sextants were made of wood. At sea, the wood warped due to the humidity, so that the instruments were soon made of metal. The sextant is a very sensitive instrument. A small deformation of the pointer or a small adjustment of the mirror by dropping it can lead to an incorrect position determination, which is many kilometers away from the actual position. In order to be sure that the device is not damaged, a sextant was usually bought new and rarely given out. Newer instruments can be adjusted using the mirror holders . What is important here is the exact parallel position of the mirrors to one another and the right-angled arrangement to the device level and the zero position.

The sextant is depicted on a 10-DM banknote - based on a fifth transformants (144 ° range) the English company Troughton - is of Carl Friedrich Gauss been provided in 1821 a third mirror to make it in the state survey (as a solar mirror beam headlamps = Vice- Heliotrope ) to make surveying points visible.