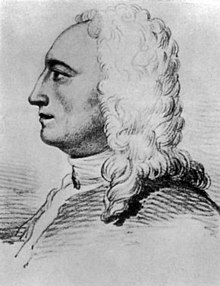 John Hadley became a Fellow of the Royal Society on March 21, 1717 . He found methods for grinding aspherical telescope mirrors , which enabled him to build the first powerful Newtonian telescope in 1721 . With its precise 15 cm parabolic mirror , it proved to be superior to a lens telescope of the same size. But he also built Gregory telescopes .

In 1731 he invented the octant , the forerunner of the sextant . In navigation and as a device for measuring star heights, it soon replaced the Davis quadrant used up until then .
His brothers George (1685–1768) and Henry (* 1687) were involved in the construction of the telescope as well as the octant, which was first named "Quadrant" .

John Hadley was the oldest of George Hadley and Katherine Fitzjames' 6 children. His younger brother, George Hadley , became a well-known meteorologist and discovered the Hadley cells of the atmospheric circulation.
Hadley married Elizabeth Hodges in 1734. They had one child, John, born in 1738.