The Gregory Telescope , also Gregorian Telescope , is a reflecting telescope invented by James Gregory in 1670 and first built by Robert Hooke in 1674.

Beam path of a Gregory telescope 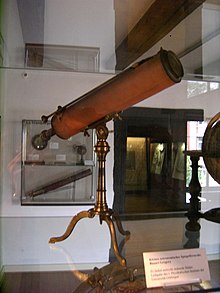 In contrast to the Cassegrain telescope , a concave secondary mirror is used beyond the primary focus, which throws the image into the secondary focus through a central opening in the primary mirror. The design was used until the 19th century because of the easier production of concave secondary mirrors, but was overshadowed by the more successful, because shorter, design by Cassegrain. Since the Gregory telescope delivers an upright image, small spotting scopes of this design are still produced today in order to save the erecting prisms. A modified structure according to Gregory, with additional mirrors for further folding the beam path, is used in some telescopes for solar observation in the optical and for millimeter waves and submillimeter waves , for example the Viper telescope in Antarctica or the Green Bank observatory . Modern optical instruments of this type are the two 6.5 m  Magellan telescopes and the 1.5 m GREGOR telescope on Tenerife . One reason for choosing the Gregory design is the ability to access the primary focus without removing the secondary mirror. One example of this is the Effelsberg radio telescope .

Disadvantages compared to a comparable Cassegrain telescope are the larger secondary mirror, the greater obstruction as a result, and the longer tube, which is not only more susceptible to wind, which requires a more stable mount, but may also require a larger dome.