The title of this article is ambiguous. Further meanings are listed under Navigation (disambiguation) .

Navigation - from the Latin navigare (leading a ship), Sanskrit navgathi  - is the " skipper's skill " on water (see nautical science ), on land and in the air . Your goal is to steer the vehicle or aircraft safely to the desired destination. Two geometrical tasks precede steering: determining the current position ( location determination ) and determining the best route to the destination.

With the beginning of space travel , the tasks of navigation were generalized to near-earth space, which, among other things , required the transition from two-dimensional methods ( 2D , including flight altitude 2½D ) to three-dimensional methods. The acceleration of aviation has also led to the development of integrated systems, such as flight management systems .

Navigation in the most general sense also includes other aspects, for example the sense of balance and the imagination of space . It can then be defined as finding your way around a topographical space in order to reach a desired location. For similar reasons, finding your way around the Internet with computer programs has also been referred to as navigation . So Netscape Navigator , the name of the mid-1990s leading Web browser for the 16-bit operating systems from Microsoft and Mac OS from Apple.

For some time now, the term has also been used for orientation on the Internet or in a homepage .

The activity of navigation consists of three sub-areas:

Sub-tasks 2 and 3 require the ability to maintain traffic even under difficult conditions (e.g. fog , danger of ice or thunderstorms ) and to exclude any possibility of a collision with other vehicles. For this reason, navigation also includes the technology and science of being able to optimize the route again in addition to localization , as well as quickly determining changes in attitude and altitude in aircraft and adapting course / speed accordingly.

The basis of all navigation are visual navigation (sense of space and visual control) and coupling (route calculated from the course), but nowadays it is supplemented by radio or satellite navigation methods . The latter allows a location to be determined with an accuracy of about 10–20 meters, even with cheap handheld devices under € 100.

Until about the year 2000, however, dead reckoning methods were of the greatest importance - the calculation or estimation of the distance covered by means of course and speed (or, in the case of larger aircraft and rockets, also by means of acceleration ). The longer the route or the more complicated the route, the more this navigation (usually unconscious for pedestrians or drivers) has to be supplemented by position measurements on the way. Even with good compasses etc., the coupling accuracy is limited to 1–3 percent of the distance covered at best, but can deviate from the assumed (“ cast ”) course by 10 percent due to cross winds and ocean currents .

Most navigation methods originate from nautical science, i.e. determining the location and steering of ships . The classic localization tools are of a geometric nature ( angle measurement and direction measurement ) and the determination of the vehicle's own speed and distances. They have been used for centuries in the following groups of methods:

As a long range navigation (English: Long-Range Navigation - LRN) is called in nautical and aviation ( long-haul flight ) the km on routes of some 100 necessary process of localization and the vehicle control.

The special methods of long-range navigation have now receded  into the background - due to the predominance of GNSS satellite methods such as GPS and GLONASS - but are still required for redundantly secured navigation that is independent of GPS. Up until around 1995 it could be said in nautical science that long-distance navigation is always necessary when terrestrial navigation (in the wider field of vision of a coast or islands ) is no longer sufficient and the destination has to be approached more precisely than about 50 km.

The celestial navigation means of time and angle measurements to the sun and bright stars is the classic method, since the voyages of Polynesians and other Sea Peoples to experience all boaters - heard - and to this day for training. Until about 1970 it was the basis of long-range navigation in the entire southern hemisphere , but was also used in northern countries for about 10–20% of all location determinations. Since the 1970s, it has been increasingly replaced by radio and satellite procedures in the south (see below), but is still necessary for small ships and for emergencies (power failure, etc.).

In the radio navigation are important

Last but not least, special procedures are also necessary for special tasks on long journeys. B. Meteorological navigation , magnetics , polar navigation or depth measurement ( echo sounder, etc.) should be mentioned. In antiquity and at the beginning of the great "discovery period" (14th - 16th centuries) the method of lunar parallaxes and the observation of natural phenomena such as the flight of birds , drifting grass , dead wood, seaweed , etc. were also important. Approximately known ocean currents or wind systems ( trade winds !) Were also useful for finding your way across the Atlantic or Pacific .

The following important information is missing from this article or section:
Polynesians, Chinese, Arabs, ...
Help Wikipedia by researching and pasting it . 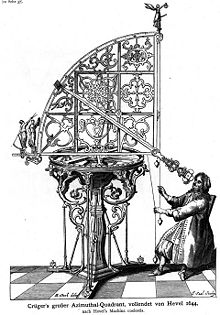 Quadrant of Hevelius , around 1644 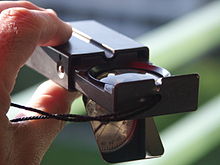 Compass of the Swiss Army with division in artillery promille

The art of navigation was first developed in India on the Sindh about 6000 years ago and probably also in Egypt and what is now Lebanon . These methods of coupling and partly astronavigation were originally used for seafaring , from around the 1st millennium BC. BC but also for expeditions on land. During this period, the Phoenicians were the first to sail the open sea (in the eastern Atlantic and when circumnavigating South Africa ). About soundings report Herodotus (500 v. Chr.) And the Bible , eg. B. Luke's Acts of the Apostles (27 : 28-30).

The simple dead reckoning with the setting down of the course and the estimation of drift and speed was expanded to include the first measurement methods around the turn of the century . Where the compass was invented is still a matter of dispute; It is said to have been mentioned for the first time in China in the 11th century and in Europe in the 12th century. The coastal shipping was done but continue to view . From about the 7th century onwards, the Vikings supplemented the method with observing birds , wind and currents and came to Greenland and North America around 980 to 999 . The Arabs and other authors who wrote Arabic handed down and developed the astronomical knowledge and measuring instruments (including the astrolabe ) of antiquity.

In the 11th century Avicenna had developed a forerunner of the Jacob's staff and a method of determining longitude. Of al-Biruni different navigation aids were mentioned in a non-translated into Latin script, and "the boat-shaped", which similar to the flat (planisphärische) astrolabe worked (starting from the idea that the earth and the fixed stars always rotate in the same place).

No later than the 4th century BC. Every region in the Mediterranean Sea had its own sea ​​manual . Such are not passed down in the millennium between the Roman Empire and the Compasso di Navigare ( 1296 ). The oldest Middle Low German "Seebuch" (around 1490 ) is based on sources from the 13th to 14th centuries and describes sea ​​depths , ports and tides , in the more recent part also courses between different points. The first portolans appeared around the end of the 13th century, reproducing the Mediterranean and all port cities with amazing accuracy. Towards the end of the 15th century, astronomical navigation based on the sun and the North Star was developed to practical level in Portugal . The astrolabe held on the pendulum ring and the Jacob's staff served as measuring instruments .

From 1500 onwards, numerous world maps were created, logging and quadrants were used and the Mercator projection was invented. However, a solution to the length problem was only found in the 18th century through the method of measuring lunar distances to stars (see also lunar parallax ) and through the construction of precise clocks. The four chronometers (1735–1759) by John Harrison and the dispute over the mirror sextant, invented three times between 1731–1740, became famous . As the Boston captain Thomas Sumner , the method of astronomical 1,837 ride height line had found missing from today's known navigation principles, only the radio navigation (from 1899) and the inertial navigation ( Johann Maria Boykow 1935, Siegfried Reisch 1941). The use of artificial earth satellites , on the other hand, can be viewed as a combination of astro and radio navigation.

Today navigation systems (mainly automated methods for determining position) are used in the fields of seafaring , aviation , road traffic and land surveying ( geodesy ). For some years now, small devices in the form of cell phones have also been developed for pedestrian navigation .

In the course of time, others were added to the 3 classic procedures (see above). Today we generally distinguish 7 groups of methods and the eighth their optimal combination:

While it is not possible to navigate with the help of a magnetic compass near the magnetic poles , the gyro compass fails at the geographic poles because of the lack of precession .

The navy also uses the term tactical navigation , which is about taking a certain position within an association .

Space travel : There are also special problems to be solved when navigating space probes , above all the lack of a gravitational field as a reference system.

Navigation is also being used more and more frequently in the operating room . Examples of this are navigation-assisted knee and hip endoprostheses , spinal surgery and interventions on the brain. A distinction is made between imaging and non-image navigation.

The bread roll bag navigation is popular, but not without risk .

The transition from navigation as an aid to autonomous navigation is a current development. This is intended to increase safety and economic efficiency.

Literature on the history of navigation