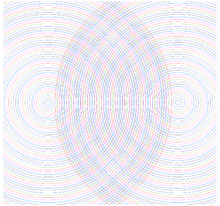 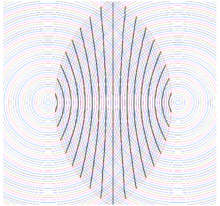 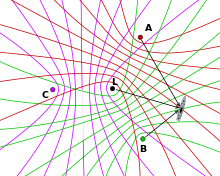 Under the term hyperbola navigation or hyperbola localization , geometric-physical methods of location determination are summarized in which either

Each tuple of several measurements provides a geometric location for the position of the observer (i.e. his receiver ) if the locations of the transmitters (or the answering transponders ) are known. The number M required measurements is at least 1 higher than the dimension n of the model ( ).

Geometry of the transmitter and receiver positions

Usually these are transmitters or transponders

The geometric locations of each measured difference in distance (also called base lines on defined areas ) are:

Solution on the earth's surface or in space

In the case of a flat problem (e.g. in short and medium-range navigation with HiFix or DECCA ), three transmitters are sufficient - which results in two hyperbolas - and the clear reception of your coded signals. The location of the receiver results from the intersection of the two hyperbola stand lines . The third geometric location is generally the surface of the earth or (in navigation) the sheet (s) of a nautical chart or a suitable aeronautical chart (see ICAO and Decca charts).

The spatial intersection requires four transmitters (i.e. four satellites ) which must be computable with sufficient accuracy. If a location is sufficient for only about ± 1 km, then the most up-to-date (" osculating ") orbital elements are sufficient (five geometric elements, a time and generally two rotation rates due to the earth flattening ). If the accuracy is to be higher, one must take into account up to a few hundred orbital parameters and the small irregularities of the earth's rotation .