In mathematics, an intersection point is a common point between two curves in a plane or in space. In general usage, the point of intersection is that of two straight lines , which is, however, contained in the mathematical term “curve”. In space there is also the intersection of a curve with a surface . In the simplest case, a straight line intersects a plane. 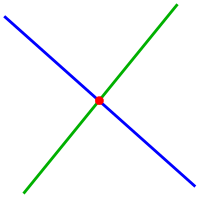 Intersection in the plane

For the intersection of two non-parallel

If is, the two straight lines are parallel.

and a straight line through the points

The point of intersection is calculated by converting the two-point forms into coordinate forms beforehand.
The intersection results in

If two non-parallel lines and are given, they do not have to intersect. Because the intersection of the associated straight line does not have to be included in both segments. To clarify the latter, both routes are represented parameterized:

If the lines intersect, the common point of the associated straight line must have parameters with the property . The cutting parameters are the solution of the linear system of equations

This is solved (as above) with Cramer's rule, the intersection condition is checked and or is inserted into the associated parameter representation in order to finally obtain the intersection point .

Example: For the distances and the system of equations is obtained

and . I.e. the lines intersect and the intersection is .

Note: If you consider straight lines through two pairs of points (not segments!), You can ignore the condition and obtain the intersection of the two straight lines with this method (see previous section).

Section of a straight line

Intersections of a straight line with a circle

the system is first shifted by setting and so that the center of the circle is at the zero point. This results in a new circular equation

and as a new straight line equation

By solving the straight line equation according to or , inserting it into the circular equation, applying the solution formula for quadratic equations and then undoing the shift, the intersection points are obtained with

if applicable. In the case of equality, there is only one point of intersection and the straight line is a tangent to the circle.

Note: The intersection points of a straight line with a parabola or a hyperbola can be determined analogously by solving a quadratic equation.

Determining the intersection of two circles

lead back with one of the two circles (see above). 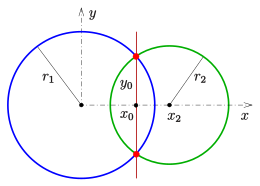 In this case the first circle has the zero point as the center and the second center is on the x-axis. This simplifies the equation of the power line and results for the intersection points

The general case can always be reduced to this special case by a suitable shift and rotation.

Analogous to the circle equations above , the center points of the circles can be described as follows:

The designations can be found in the adjacent graphic. Furthermore, the vector and can be described as follows:

(Note: represents the vector norm or the length of the vector)

Where represent the radii of the circles. So this vector connects the points and . This formula is arrived at through geometrical considerations. With the triangles in the graphic, the following equation must be fulfilled according to the Pythagorean Theorem .

Furthermore, the sum of the lengths of and the distance between the centers of the circles corresponds to:

As a result, the center-to-center distance can be divided into the lengths of and as a percentage with the parameter :

With the equations (1) and (2) the parameter can be determined:

Now we need a unit vector orthogonal to the direction vector between and . This can then be represented as follows:

The intersections can now be described as follows: 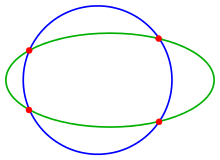 The task of determining the points of intersection of an ellipse / hyperbola / parabola with an ellipse / hyperbola / parabola generally leads to an equation of the fourth degree when a coordinate is eliminated , which can only be easily solved in special cases. The intersection points can, however, also be determined iteratively with the help of the 1- or 2-dimensional Newton method , depending on whether a) both conic sections are implicitly represented (→ 2-dimensional Newton) or b) one is implicitly represented and the other is parameterized (→ 1-dim. Newton). See the next section. 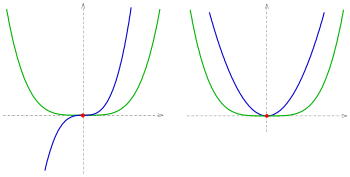 a) have different tangents ( transverse cutting ), or
b) have common tangents and intersect at the point ( touching cutting , see picture).

If the two curves have a common point and a common tangent there, but do not cross, they touch at .

Since contact cutting rarely occurs and is mathematically very complex to deal with, transversal cutting is always assumed in the following . In order not to have to mention it again and again, the respective necessary differentiability conditions are also assumed. The determination of intersection points repeatedly leads to the problem of having to solve an equation with one or two equations with two unknowns. The equations are generally not linear and can then be solved numerically, for example using the 1- or 2-dimensional Newton method . The individual cases and the equations to be solved are described below: 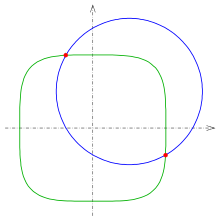 This is the simplest case after the explicit one. Because you only have to insert the parametric representation of into the equation of and you get the equation

The starting values ​​required for the respective Newton method can be obtained from a visualization of the two curves. A parameterized or explicitly given curve can be easily visualized because a point can be calculated for a given parameter or directly. For curves given implicitly this is not so easy. Here one generally has to calculate curve points with the help of starting points and an iteration process.

It's the Newton iteration for

perform. You can choose −1 and 1.5 as starting values.

(see picture).
It's the Newton iteration 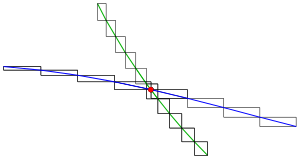 If you are looking for points of intersection of two polygons, you can examine each section of one polygon with each section of the other polygon for intersections (see above: intersection of two sections). This simple method is very time-consuming for polygons with many sections. So-called window tests can significantly reduce the computing time. Several sections are combined to form a sub-polygon and the associated window is calculated, which is the minimum axis-parallel rectangle that contains the sub-polygon. Before an intersection point of two partial polygons is laboriously calculated, the associated windows are tested for overlap.

Intersection of a straight line with a plane 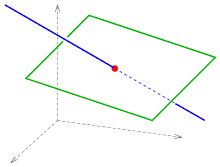 If a straight line is the intersection of two non-parallel planes and is to be intersected with a third plane , the common point of the 3 planes must be determined.

To prove this, convince yourself of observing the rules for a late product .

Intersections of a curve and a surface 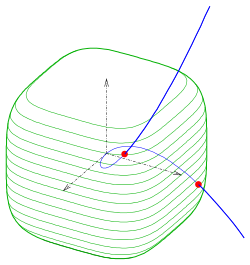 As in the flat case, the following cases lead to generally non-linear systems of equations that can be solved with a 1 or 3-dimensional Newton method:

Note: A straight line can also be contained in a plane. Then there are an infinite number of points in common. A curve can also be partially or completely contained in a surface (see curves on the surface ). In these cases, however, one no longer speaks of an intersection .