The German Biography ( DB ) is a biographical reference work that is freely accessible as an online database . Your reporting period ranges from the Middle Ages to the present. The aim of the German biography is to provide "structured lexical expert knowledge with information on [...] personalities of the German-speaking cultural area".

The database was founded in 2001 as a "digital register" for General German Biography (ADB) and New German Biography (NDB). Since 2010 it has been gradually expanded into the central historical-biographical information system for the German-speaking area . 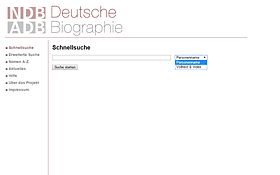 The joint offer of the Historical Commission at the Bavarian Academy of Sciences and the Bavarian State Library (BSB) is based on the two standard works:

The German biography was founded in August 2001 as a "digital register" (ADB / NDB register). The NDB editorial team was responsible for the content of the database and the Munich Digitization Center (MDZ) was responsible for the WWW interface . In May 2003, the Electronic General German Biography (E-ADB) followed, which was based on the scanned pages of the ADB. 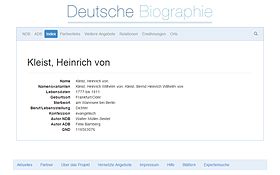 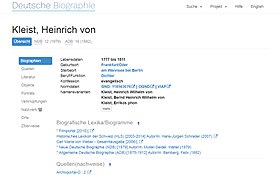 In a project supported by the German Research Foundation (DFG), the General German Biography and the New German Biography (Volumes 1–22) were made available as electronic full text in February 2010 and the website was comprehensively renewed. In 2010 the “ADB / NDB register” comprised a total of 130,000 entries.

The range of biographical data sets has more than doubled since 2010. A follow-up application approved by the DFG at the end of February 2012 enabled a further step to develop the database into a central historical-biographical information system for the German-speaking area.

As a result of the expansion phase 2012–2014, “the expanded and updated online presence” of the German biography with around 268,000 entries was activated in December 2014 . Among other things, all names were compared and linked with the common authority file (GND).

Since July 2014 , the project management has been with Malte Rehbein , who teaches "Digital Humanities" at the University of Passau .

As part of the follow-up application approved by the DFG in October 2014, the “Cooperation with institutions maintaining national cultural assets” was further expanded. New partners include the Berlin State Library , the AdW-Mainz , the German Film Institute and the SLUB Dresden . The 2014 annual report of the Historical Commission states: “The aim of the new DFG proposal is to double the number of personalities that can be researched in the German Biography to then probably more than 500,000. The semantic processing and visualization (network analysis) should also be continuously expanded. "

Since the end of the DFG funding phase 2014–2016, around 540,000 people can be researched using the German biography . The largest partners in terms of numbers are now Kalliope , filmportal.de and the annual reports for German history .

Another DFG funding phase is planned for 2017–2019, in which, in addition to existing biographical databases, print publications to be digitized are also to be indexed in a structured manner.