The term chronometer (neuter, colloquially also male, from ancient Greek χρόνος chrónos "time" and μέτρον métron "measure, scale") stands for particularly precise, portable mechanical clocks , as they were previously needed especially for time determination and navigation on ships and airplanes . It is characterized by the use of a balance-spring oscillation system in conjunction with a chronometer escapement .

The chronometer movement is housed in a brass case, which is closed at the top by a screw ring with glass. The housing is gimbaled in a wooden box. The box is covered with a lid, which is usually provided with a glass pane.

Until around 1970, portable observation watches were used to compare a time standard (e.g. a precision pendulum clock from an observatory ) and one (or more) chronometer (s).

The term chronometer is often used for high-quality and precise watches (especially wristwatches). If these are mechanical watches, however, these are not equipped with chronometer escapements , but with anchor or coaxial escapements . Officially, such watches may only be called chronometers if they have been subjected to an appropriate test.

The term should not be confused with that of the chronograph (or chronograph), which describes a watch with an additional stop function or is used for recording devices ( band chronograph , pressure chronograph ).

The development of accurate clocks was initiated by the carpenter and self-taught clockmaker John Harrison . In 1714 the British government had put a heavy price on solving the longitude problem - a method for determining the exact longitude at sea. Harrison's solution, a precise wheel clock, disgruntled contemporary astronomers and scientists who instead looked for other solutions ( lunar distance from stars, earth's magnetic field) to the problem. Harrison was ultimately successful, but his model was too expensive. His watch, later called H4, used a balance wheel, but not a chronometer escapement, but a verge escapement . One of the further developments of Harrison's fourth and last model was created in 1778 by the watchmaker John Arnold (1736–1799), who coined the term chronometer in 1780 to advertise his instrument. The chronometer escapement also goes back to Arnold, but Thomas Earnshaw created the shape that was ultimately used in 1790.

For a long time, chronometer production remained a manual activity. Particularly in England and France, individual details were continuously perfected. In 1777/78 a chronometer built by Johann Thiel (also Thiele, Thialen) from Bremen was tested by the English Board of Longitude , but despite the ingenious details, it did not meet the requirements. In Germany, despite some groundbreaking work such as For example, Christian Friedrich Tiede (in Berlin since 1825) did not produce equivalent chronometers until relatively late - around 1880. Before that, English and, more rarely, French raw works were imported. At the end of the 19th century, Swiss chronometer makers developed more efficient production methods with interchangeable parts. In Germany, it was not until the war economy of the 1940s that the industrial production of a manufacturer-independent standardized "standard chronometer" was established. Numerous craftsmen were forced to work for this. The Hamilton Watch Company in the USA only developed industrial chronometer production under the influence of the war economy. 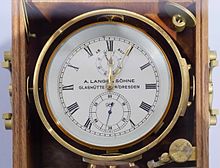 The centers of chronometer construction in Germany were Hamburg and Altona, Bremen and Glashütte (Saxony) . In addition to England and France, chronometers were built in the 19th century in Amsterdam (by Andreas Hohwü), Copenhagen (by Carl Ranch on behalf of the British Navy) and in Switzerland (by Abraham Louis Breguet and Ulysse Nardin ). In Russia, the First Moscow Watch Factory had been building chronometers in cooperation with France since the 1930s, after the Second World War on the basis of production documents from German manufacturers.

Marine chronometers were widespread until the end of the Second World War and were also used in the navy afterwards . The decline of the mechanical chronometer began around 1960 with the invention of the quartz watch , the accuracy of which improved by two to three powers of ten . There was hardly any need for the classic chronometer as navigation instruments . Today ships mainly navigate with the Global Positioning System (GPS), which is also based on high-precision time measurement, but astronavigation instruments and associated tables must still be carried in an emergency .

The standard or world time required to determine length is now available everywhere through precise quartz clocks or time signals , which in turn are controlled by a worldwide network of atomic clocks .

Even today marine chronometers are still made for collectors and enthusiasts.

Officially, a device may only be called a chronometer if it has been tested by an observatory or an official corridor control center using a standardized measuring procedure . 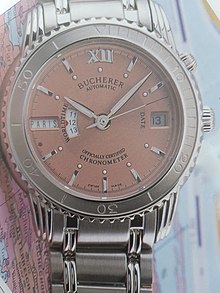 A watch can only be called an official chronometer if its Swiss movement has passed a test (according to NIHS 95-11 / ISO 3159) by the independent Swiss observatory Contrôle officiel suisse des chronomètres (COSC) . If the movement of a watch receives the COSC certificate, the manufacturer usually marks the watch with the word Chronometer . After passing the test, the movement receives a corresponding certificate confirming its accuracy. It contains the following information:

For quartz movements, the test takes eleven days and the following values ​​apply:

A German test center for chronometers has existed in the Wempe Chronometerwerke Glashütte i / SA observatory since September 2006 and is operated by the jewelry and watch dealer Wempe KG. It was certified by the Physikalisch-Technische Bundesanstalt (PTB) as a calibration laboratory and branch office for chronometer tests of the German Calibration Service (DKD) in cooperation with the State Office for Metrology and Calibration in Thuringia and the Saxon State Office for Metrology and Calibration . The limit values ​​for mechanical wristwatches correspond (according to DIN 8319-1) to the above-mentioned Swiss values. There are differences to the Swiss test for quartz watches, for which the following test criteria apply:

In contrast to the Swiss test, fully assembled wristwatches are tested here. The number of units tested is much lower compared to the COSC .

From 1872 to 1968, chronometry competitions were held for individual, mostly additionally regulated, clocks in the Neuchâtel observatory . However, the competitions were then discontinued due to the quartz crisis . Since 2009, the Le Locle Clock and Watch Museum, together with the municipality of Le Locle , has organized a chronometry competition every two years, which is organized by the COSC , the Haute Ecole ARC and the Observatoire de Besançon .