The Mercator projection used in cartography is a form of cylinder projection named after the cartographer Gerhard Mercator , in which the projection in the direction of the cylinder axis is adequately distorted in order to achieve an angular representation of the earth's surface. The Mercator projection is not a projection in physical terms and can therefore not be constructed geometrically. The angular accuracy is synonymous with conformity , so that geometric shapes in the small remain undistorted. In contrast, the Mercator projection is neither true to area nor true to direction over large distances, i.e. H. Areas have different scales at different points in the figure, and angles of direction to distant points are not the same in the plane map and on the sphere, because great circles as the shortest connections between two points are not mapped on straight lines. Length fidelity exists only along one or two distinguished lines.

Mercator projections are particularly used in navigation and surveying: in navigation as a normal projection, in surveying mainly as transverse projections with different axes for different meridian strips ( UTM , Gauß-Krüger coordinate system, etc.). In 1569 Gerhard Mercator had published a map of this type for navigation purposes in the normal position of the image surface, on which a controlled course could be drawn as a straight line for the first time.

As a first approximation, the earth's surface is a spherical surface that cannot be mapped onto a flat map without distortion. In the Mercator projection, an imaginary cylinder is placed around the earth, which touches it along a great circle or cuts in two circles on either side of this great circle. From the cylinder axis, any point on the globe can be geometrically projected onto a line that is perpendicular to this great circle. In this case, archetypes lying within the cylinder are enlarged the more in the circumferential direction the closer they are to the axis, while those outside are reduced in size. In order to achieve angular accuracy, such a surface element must therefore be enlarged by the same factor in the axial direction. In order to determine the position in the axial direction, the enlargement must be mathematically integrated over the distance from the contact line to the point to be projected. 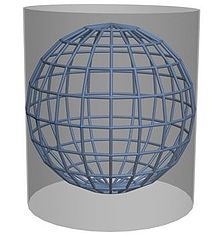 The following equations determine the coordinates and a point on a Mercator map from its latitude and longitude (with the longitude of the map center, angle in radians ). The earth is assumed to be spherical; Lengths are made dimensionless with the earth's radius . The equation for y is the above-mentioned integral of the reciprocal of the cosine of the latitude (instead of the tangent in the gnomonic cylinder projection):

The inverse is the Gudermann function :

The application of the Mercator projection in the transverse position of the imaging cylinder was published in 1772 by Johann Heinrich Lambert . To increase the accuracy, Carl Friedrich Gauß extended the application to the earth ellipsoid in 1825 , which was further investigated by Louis Krüger in 1912 for practical use (see Gauß-Krüger coordinate system ). 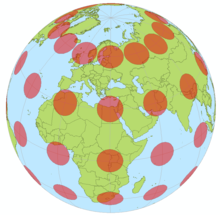 Tissot indicatrix of the globe in perspective 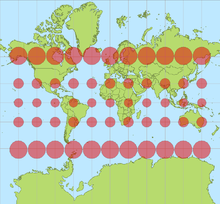 Tissot indicatrix of the Mercator projection

Scale bar for a world map in the Mercator projection

The most important property of the Mercator projection is its angular accuracy. This also means that in small areas the length scale is the same in all directions. However, it is only constant along the line of contact and its parallels. The projection is only true to length at lines of contact, i.e. H. corresponds to the specified scale. So it is not true to area either. The distortions become increasingly larger with distance from the line of contact and become infinite on the axis of the projection. If there are two lines of contact, the area between them is compressed.

The angular fidelity also leads to the axial fidelity in a normal position. This means that the north direction is the same everywhere on the map. Together with the angular accuracy, this means that loxodromes (i.e. constant courses) are mapped as straight lines. However, the shortest connections are not shown as straight lines; instead, directional accuracy would be required (→ Gnomonic azimuthal projection ).

The closer an area is to the North or South Pole, the more it is enlarged in the normal position. As a result, the island of Greenland (2.2 million km²) is shown in this map projection almost as large as the continent of Africa (30.3 million km²). The north and south poles cannot be shown because these points would be at infinity in the projection.

The normal Mercator image is based on almost all nautical charts and some aeronautical charts because of its angular and axial accuracy . The changes in scale are noticeable on larger sections of the earth's surface, so that the latitude scale printed on the edge of the map is not equidistant. One nautical mile on the nautical chart corresponds to exactly one arc minute at the same latitude on the left or right edge of the chart.

For small-scale maps, especially for the basemaps of a large number of national surveys, the transversal Mercator projection as a Gauß-Krüger coordinate system , universal transversal Mercator projection (UTM) and similar is widely used. The UTM is used in 30 different axis positions for 6 ° wide strips, Gauß-Krüger uses twice as many positions for 3 ° strips. In order to improve the length fidelity over the wider imaging surface, the projection cylinder of the UTM cuts the earth ellipsoid in two lines.

In the Swiss national survey, an oblique Mercator projection is used, in which the axis is chosen so that the fundamental point of the national survey, the Bern observatory, lies on the same meridian and on the line of contact.

Maps on the Internet

In the Internet, both free projects such as OpenStreetMap and commercial providers such as Bing Maps and Yahoo Maps use this projection for two-dimensional representations.

In 2018, Google Maps switched to an orthographic azimuthal projection , in which the spherical shape of the earth becomes visible when you zoom out.

The Mercator projection is unsuitable for large-area maps, in particular world maps, unless they are specifically used to determine the course in navigation because of its distortions, which increase sharply with increasing distance from the line of contact. The fact that it was nevertheless used here at times and in part led to a discussion initiated by Arno Peters from 1974 on about the Mercator projection and the alleged alternative of the approximately equal-area cylindrical Peters projection , known in cartography as Gall's orthographic projection . Peters criticized the fact that the Mercator projection conveyed a “ Eurocentric view of the world”, since on a world map in normal Mercator projection industrialized countries in temperate latitudes such as Europe appear proportionally larger than areas near the equator, where mainly developing countries are located.