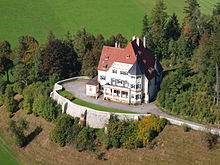 Aerial view of Bullachberg Castle from the south

Bullachberg Castle is a stately hipped roof building with a round tower. It was built in 1905 on the survey of the same name in Schwangau by Eugen Drollinger (1858-1930) for the Munich entrepreneur Emil Papenhagen and acquired in 1927 by Rafael Prinz von Thurn und Taxis , who lived here with his family until his death in 1996. Today Elisabeth von Elmenau lives there, who bought the property in 2013.

The Bullachberg is an elevation in the middle of the plain in front of the world-famous royal castles of Neuschwanstein and Hohenschwangau , which are only around 1000 meters away. The castle has around 900 square meters of living space and is stylistically based on Art Nouveau . It is a listed building and houses a small chapel in addition to stately living rooms .

At the foot of the Bullachberg, building permission for a small luxury hotel was granted in 2002 after several years of political conflict . Due to the prominent location near the royal castles, the approval process attracted nationwide attention. The new building was supposed to be an extension of the existing manor buildings. However, the project planned by Prince Rafael's heirs could not be implemented for the time being. In spring 2006, Porsche AG acquired the property for 6 million euros in order to realize the project, but put it up for sale again in September 2011. In 2013, an Elisabeth von Elmenau bought the property. Since then she has been running an organic farm there as well as holiday apartments and guest rooms in the castle. In addition, weddings, theater performances and events have been held at Bullachberg Castle since 2014.

The attractive building was used in 2001 for the love story Das Schneeparadies for film purposes.

List of castles and palaces in the Ostallgäu district